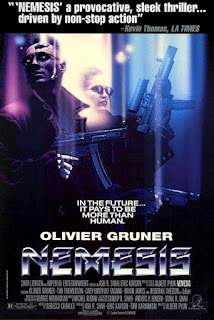 I started wearing prescription eyeglasses in fourth grade (I know, boo hoo). I have not stopped wearing glasses since then. I have never tried (nor wished to try) contacts. I have debated getting Lasik surgery done, but let's face it, it costs a decent amount of money, and the people I know who have had the surgery done still require glasses to read. I spend an inordinate amount of time reading. What good is the surgery, then? The way I figure it, I'm wearing glasses anyway, and it's the devil you know versus the one you don't. Consequently, I have never owned a "cool" pair of sunglasses. I have bought prescription sunglasses in the past, but changing glasses everytime you enter or leave a building is a bigger pain than you would think. So now I have a pair of slip-on shades for my glasses. They may not be as cool as Dwayne Wayne's, but they suit me just fine. What's the point of this little discourse, you may ask? I don't think I could hack it in the world of Albert Pyun's Nemesis. Everybody in this movie wears sunglasses at all times (okay, most times). How do they not run into the furniture?

In the future...Alex (Olivier Gruner) is a cyborg working for "the Man" to bring down bio-engineered and synthetically-enhanced gangsters, hookers, terrorists, and so on. After getting blown up real good during a mission to grab a microchip, he winds up convalescing in a border town in Baja, New America. There he is contacted by fully-synthetic ex-girlfriend, Jared (Marjorie Monaghan, who I would have sworn was actually Linda Fiorentino), to come back into the fold. Instead, Alex becomes a smuggler of something or other on the black market. After myriad machinations too complicated to actually delineate here, Alex is tasked with getting a microchip containing VERY IMPORTANT INFORMATION to the revolutionary gang, the Red Army Hammerheads, and stopping the robots (cyborgs, synthetics, androids, whatever the hell) from taking over the world. 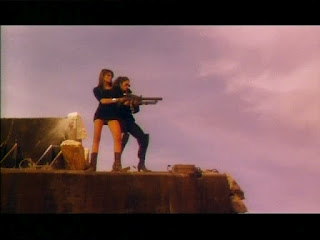 This future vision of the world (along with ninety-nine-point-nine percent of the ones depicted in every form of media) is, of course, a dystopian one. Almost every set and town in the film is crumbling away and usually industrial in nature. Filters are used to give us the notion that our atmosphere has been permanently changed by some cataclysm. You've seen this effect before, especially if you've seen many movies from the Eighties and Nineties. I like to call it the "Los Angeles Filter," since you'll see it frequently used on establishing shots of Los Angeles, even if a nuclear holocaust hasn't occur (shorthand for smog, perhaps?). There's lots of rain (we can assume it's acid rain), and everything is just ugly. Interestingly, the robots say that they want to create a utopia by eliminating humans and replacing them with cyborgs. In other words, it's humans creating the problems faced by the world. And yet, if people didn't exist, the question must be asked, what would the robots do with themselves all day?

Let's just lay it on the line, shall we? There isn't an original bone in this film's body. Everything from the Hong Kong action movie scene of the Eighties and Nineties to Blade Runner to The Six Million Dollar Man to the work of William Gibson and the entire cyberpunk movement and more are referenced, either directly or indirectly. The writer, Rebecca Charles (whose only listed film credits on IMDB are for the Nemesis trilogy, yes, trilogy), loaded the movie up with film noir and tough guy touches. Jared narrates the film like Sam Spade or any other of a thousand private dicks, regardless of the fact that she's only in a few scenes and isn't the main character. This is not to say that a supporting character can't be the narrator, but it's not the norm (hell, Joe Gillis was dead, and he still narrated Sunset Boulevard). Speaking of the dialogue, it's meant to be hard-bitten and pithy, but instead it is glaringly self-conscious and clunky. 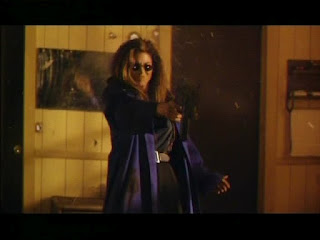 One refreshing aspect of the film is the amount of badass women it. Right from the first scene, we are given women unafraid to get their hands dirty and who know how to handle firearms. In a genre dominated by men and the male gaze, I love it when the other fifty percent of the world can stake out some terrain. And the irony that they look very good doing it is not lost upon me. Still, the women in this film are strong and, more often than not, shown as being superior to men both physically as well as in rank and mental acumen. Julian (a very muscular Deborah Shelton) has Billy (a very young Thomas Jane) killed, performs surgery on Alex, and sets him on the right path. All before putting on her sunglasses (see?) and shooting up a good portion of the hotel in which they meet. Jared is the sage whose data can save the entire planet. Max Impact (Merle Kennedy) has the Lori Petty/trickster role as the young cynic who wants revenge against Alex but will later become a strong ally. They all add something, and the film wouldn't be what it is without them, I think. Or at least, not as distinctive. 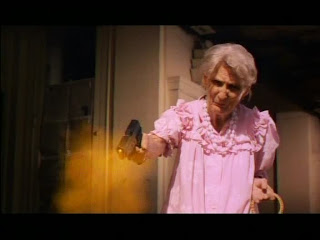 But let's call this what it is. Nemesis is a mess of a film. The plot is convoluted to the point of incoherence. The viewer is never absolutely sure whose side who's on, or which side we (as an audience) are supposed to root for. The character development is so thin, it only has one side (thank you and apologies to Red Skelton). The dialogue can actually induce wincing in those watching. The acting (with the exceptions of Tim Thomerson, the late Brion James, and Monaghan) is so wooden, one could easily come away with splinters. The film has nothing new to say about any of its themes (what it means to be human and so forth). And while the special and visual effects (including some decent stop motion) and stuntwork are solid for a low budgeter like this, the movie on the whole is nothing more than an excuse to cram ninety-six minutes with action and a little skin.

Why, then, do I take such delight in something as meaningless and bewildering as Mr. Pyun's little opus? I think it's because this is one of those rare instances where style actually does triumph over substance. Whether it's caused by the overload of the puzzling goings-on or the barrage of action, I found myself just giving in to the spirit of the whole affair. Maybe I was just beaten into submission by it.

MVT: The persistence of style and the pure abandon of any semblance of coherency make this film more fun than it really has any right to be. In other words, it just feels good.

Make Or Break: The Make is the scene where Alex is being chased by the bad cyborgs (I know, which time, right?). A cyborg (played by an uncredited Sven-Ole Thorsen) harasses a little old lady on the street. Having taken enough guff from this whippersnapper, the biddy (Mabel Falls) pulls out a rather large gun and blows Thorsen away. It's one of the more overtly humorous scenes in the film, and even though it's predictable (just like the rest of the movie), you can't help but love it.