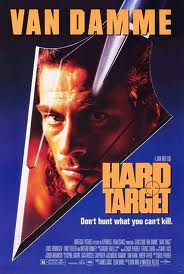 When the big Hong Kong craze started in America in the early 1990s (of course, Chinese cinema was popular beforehand, most prominently in the form of the martial arts movies of the 60s through the 80s, but still...), it was like getting punched in the teeth with a set of brass knuckles (not an experience I recommend, by the by). While there were plenty of people aware of the talent off to the East, getting your hands on the actual product was both difficult and costly. Nonetheless, once Hollywood producers realized there was money to be made with these filmmakers, they started courting them to work over here. Of course, the impending return to power of the Communist party and the fear this engendered was an added concern to Chinese natives at the time and helped said filmmakers make the decision to leap across the pond. Given budgets higher than anything they had in their homeland but still considered relatively low in America, it seemed like these skilled craftsmen were all saddled with one other hurdle to breaking through to the mainstream in this country. They all had to make at least one movie starring Jean-Claude Van Damme.

At the time, Van Damme was at the height of his popularity, and I suppose the (kind of ignorant) idea was that since martial arts are usually thought of as Asian, and these filmmakers are Asian, and Van Damme knows martial arts, then pairing these filmmakers with this star should produce results unheralded in the realm of action films. The four most noticeable directors (at least to my knowledge) to wade into this territory (but not the only expats, to be sure) were Ringo Lam, Tsui Hark, Kirk Wong, and John Woo. Of these four, only Wong didn't work directly with the seeming clearing house for Asian directors that was the "Muscles From Brussels." Also of the four, only Woo maintained a successful (if checkered) career in America before returning to China for the phenomenal Red Cliff. 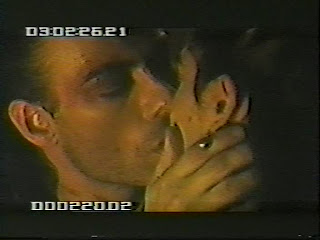 Natasha "Nat" Binder (Yancy Butler) travels to New Orleans to find her father, Douglas (writer and co-producer, Chuck Pfarrer). Unfortunately, the ex-marine had fallen on hard times and become homeless. Emil Fouchon (Lance Henriksen) and Pick van Cleef (Arnold Vosloo), coincidentally, run a service wherein they accommodate the hunting and killing of homeless vets for the pleasure of rich scumbags. Needless to say, Binder was a recent player (and loser) in Fouchon's game. Natasha hires destitute sailor, Chance Boudreaux (Van Damme), to help her find her dad (who she, of course, does not know is already dead). But when Chance and Natasha start asking questions, Fouchon decides to set his sights on the pair and unleash the hounds.

Hard Target is a take on Richard Connell's short story, "The Most Dangerous Game," first published in 1924. The idea (and the genesis of the title) comes from the story's aristocratic General Zaroff who feels that man is the most dangerous game of all to hunt. It has been adapted numerous times with varying quality. In this go at the tale, Fouchon's mindset is clarified for the viewer in the piano scene. As Fouchon bangs away at the keys, he stares at his reflection in a mirror. Woo intercuts to stock footage of actual animals being hunted and shot in (I presume) Africa. It's effective as a look into Fouchon's mind, and it's done completely without dialogue. Whether these shots were cut out because of the difference in quality of the stock footage to what Woo shot or because of any objections to actual depictions of animals being killed on screen (which would be my suspicion, though had this film been made in Hong Kong I believe they probably would have been left in), I can't say, but I prefer this former version, as it gives our villain some depth. 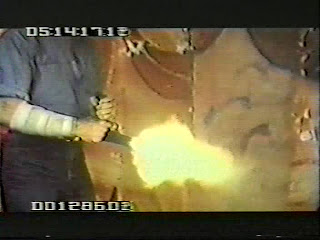 The filmmakers also seem highly concerned with the plight of the homeless. Unfortunately, they labor the point and kind of get on a soapbox about it. There are a couple of extended dialogue scenes (including a love scene), where we're reminded repeatedly how it is out there, on the streets. It gets old fast. However, the homeless people depicted in the film are given a certain amount of respect, and we do get a feel for the pride they have to swallow (nay, beat down) to survive. Douglas Binder is depicted in this version as being more than just a disheveled, harried prey. In the credit sequence, he makes it to the river, and Fouchon's "dogs" slow him down at the pier shack. Binder grabs a gas can and rolls it at the hunters, who inexplicably shoot at it until it explodes. In other words, he's allowed a moment to stand up, to show just why Fouchon and company carry on these hunts with these prey in the first place. The theatrical version takes this part away, and Binder is shown as pretty much a terrified rabbit scurrying tragically for safety.

Aside from the dialogue-heavy, exposition-laden (and repetitive) scenes which were mercifully trimmed to keep the pace up, the other noticeable changes occur in the action sequences. Woo, as a director of action, was without peer at the time. As a matter of fact, his knack for kinetic, clearly-blocked action holds strong to this day. In this early cut of the film, the action scenes are almost all longer, and here Woo's signature style really shows through. His use of zooms, juxtaposition of slow motion to realtime action, explosions with showers of sparks, freeze frame transitions, wide angle lens usage and fast tracking shots both against and with action are all in evidence. Having said that, these scenes could all use some tightening up, however why they were cut down the way they were is a mystery. Perhaps it was to hit a certain runtime for the film (this cut is one hour, fifty-seven minutes, whereas the theatrical version is one hour, thirty-seven minutes). Perhaps the American producers felt it was too much for an American audience to take in (I somehow doubt it). Either way, to me it's like hiring a chef renowned for the best beef dishes in the world and then telling him you want one of these dishes prepared by him but without using beef. 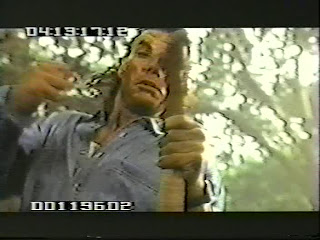 There are some other differences, of course. The Mardi Gras graveyard finale is edited differently, with more emphasis placed on the cat and mouse aspects of the situation. Here, Woo shows us shots of the ex-floats leering, teasing, while Chance speaks from among them and, predominantly, offscreen. It's an interesting take on how to play the scene, and it works better than the more traditionally cut theatrical version. Van Damme (or more likely his stunt double) seems to do a lot of flips and somersaults around the warehouse. Thankfully, these shots were mostly removed from the final cut, as they are just flat-out silly. And funnily, Fouchon's fate in this edit is not nearly as satisfying as the one in the studio version. Actually, it's fairly offhand and a tad anticlimactic.

So, which is the better version of the two? It's a fine hair to split, but I would give it to this "director's cut." Even with the more ridiculous scenes still in it (surfing on the motorcycle, punching the rattler, etcetera, you know, the ones you love), you get more of what makes Woo's movies great. Had Universal focused on refining this version and trimming its fat, they could have had one of the great action movies of the decade. Instead, they got an okay one.

MVT: John Woo takes the credit on this film. This film is a diamond in the (very) rough, and you can see that the man wasn't just phoning it in on his first American effort.

Make Or Break: The credit sequence shows us, in just a few different instances, the higher quality of film that Hard Target should have been.