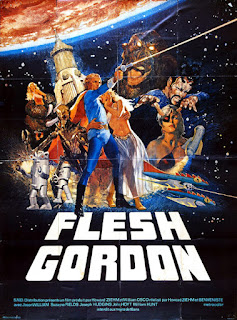 Pornography carries different connotations in different contexts. To some, it's something as simple as the baring of the human body in all its glory. To others, it's the graphic depiction of sexual intercourse. To still others, explicit violence and gore is considered pornographic. There are even those who find pornography in the use of words alone (just ask Lenny Bruce or "Penthouse Forums"). In the obscenity case surrounding the film, The Lovers, Supreme Court Justice Potter Stewart famously stated, "I shall not today attempt further to define the kinds of material I understand to be embraced within that shorthand description ["hardcore pornography"], and perhaps I could never succeed in intelligibly doing so. But I know it when I see it, and the motion picture involved in this case is not that." Slightly less famously, Jello Biafra, when detailing his obscenity trial for including H.R. Giger's Work 219: Landscape XX (aka Penis Landscape) with his band Dead Kennedys' album "Frankenchrist," described the "prurient interest" (the crux of the case against him) as (and I'm paraphrasing here), "if you look at it, and it makes you wanna whack off." Much less famously (unless you're a dork like me) but more amusingly, the cover of issue sixteen of Betty And Me shows Archie Andrews carting off casual sweetheart, Betty at the local water hole. In response to her question, "Archie, did you have any trouble rescuing me?" his reply is, "I sure did, Betty! I had to beat off three other guys!"  Naturally, there are three bruised up rivals in the water behind him, but if all you did was hear that line, would you consider that pornographic? Maybe. Maybe not. 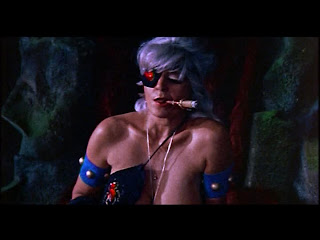 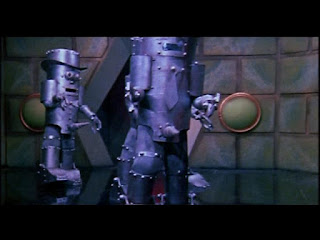 As a production, Flesh Gordon is not much to write home about. The 16mm cinematography is alternately blurry or just plain ugly. The compositions consist of establishing shots and medium to medium close-up shots. The camera is primarily static. That said, the visual and special effects (most notably some nice, low budget stop motion work by David Allen and Jim Danforth, here pseudonymously credited as Mij Htrofnad, as well as some early-ish work by Rick Baker) are, for the most part, thoughtful and effective. The shots involving effects all seem (at least to my jaundiced eye) to have not only a stronger sense of composition but also a predilection to actually move the camera. Really, they are one of the film's strongest assets, and they deliver.

Inevitably, then, how does this little opus stack up on a pornographic level? Can it even be called pornography? Yes, I think it can. It goes further in terms of not only amounts of skin shown but how they're shown than other sex comedies. Is there penetration? None is graphically on display, though if you look carefully at the extras in the background of Wang's throne room, there's some genuine nookie going on, as well as some definite handies being applied to definitely turgid members. In fact, the only scene that is treated stylistically like hardcore porn is the love scene between Flesh and Amora (Mycle Brandy) (complete with funky, wahwah pedal guitar licks but without onscreen intromission). My understanding (and I find this very easy to believe) is that live-action co-directors, Howard Ziehm and Michael Benveniste, did film hardcore sex scenes, but they were edited out of the film. My guess would be because porn was considered in many areas to be a criminal enterprise for the majority of the Seventies, and the filmmakers wanted to (understandably) avoid prosecution. It would be interesting to re-look at the film if this material ever resurfaced. Further, the actors are not particularly attractive (as was the norm for the time in this type of affair), but everyone seems to be having a real ball (ahem). 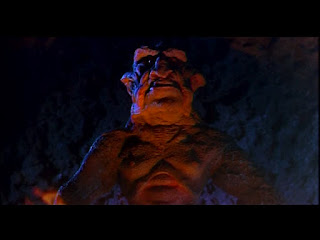 And this is the film's other saving grace. The film and filmmaker's attitude is one of reverence and playful satire for the works that inspired it. This is stated outright in an opening text scroll extolling the pulp serials of the Thirties and Forties, from Captain Marvel to (the original) Flash Gordon. The film is a romp, "in the spirit of burlesque." Throw in some broad (and some subtle), bawdy humor, some death traps that you have no idea how our heroes will get out of but still know to a certainty they will (just like in the infamous cliffhangers of yore which invariably resulted in a cheat of some form or another), some naked people rolling around and groping each other, and you get a film that, technically, is only worthwhile on an effects lover's level, yet still exudes a mischievous sense of adventure that makes the whole thing go down (ahem, again) a pleasant enough treat.

MVT: The overall sense of delight makes up for the majority of the film's deficiencies. If it wasn't for this mien, the film wouldn't be overly appealing to anyone other than special effects devotees, I think. Still, this would make a hell of a party movie.