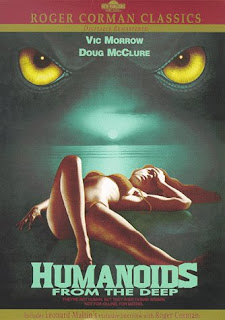 With the release of “Corman’s World”, I wanted to honor Roger Corman by reviewing one of his films. As he’s arguably more famous for his producing, I decided to cover one of his produced movies, as opposed to directed. I chose a film that signifies his status as the schlockmeister. It’s a cheesy and sleazy ditty directed by Barbara Peeters and Jimmy T. Murakami (who went uncredited) called “Humanoids From the Deep” (a.k.a. “Monster”).

The small fishing village of Noyo is struck by a strange case of murders. All of the town’s dogs are slain and people are going missing. Dr. Susan Drake (Ann Turkel) believes the attacks are from amphibian creatures. The markings left certainly indicate that. The townsfolks, such as Jim Hill (Doug McClure) and Hank Slattery (Vic Morrow), believe otherwise. It’s not until the fishy creatures descend upon their town that they truly believe.

The fish creatures, humanoids from the deep, are done in the classical rubber suit costume. The film’s costume and effects designers were on top of their game this time out. They splattered the costumes with oozy green slime and scaly skin. Their mouths have a lockjaw type set of teeth and their eyes are huge and bulging. It’s everything you’d want from a B-movie monster. 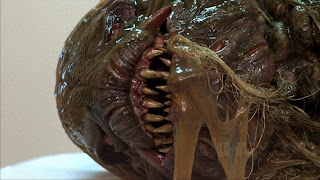 The way they attack their prey is radical, to say the least. They take the women captive and rape them in hopes of reproducing. How a fish and a human reproduce is beyond me. Considering this is a film about giant fish monsters that rape people, I’ll go with it. I swear Dr. Drake even mentioned that they’ll eventually start raping the men. I guess they were saving that for the sequel.

The downtime between the humanoid attacks can be both entertaining and grating. I enjoyed the actors in their roles, most notably Vic Morrow as Hank Slattery. They do their best with the pithy dialogue, which includes many wild accusations of one another. How and why someone would kill the town’s dogs overnight without being noticed is questionable. 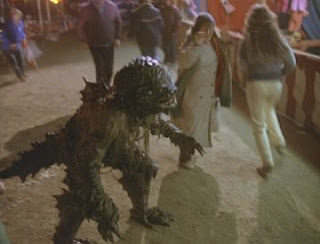 “Humanoids From the Deep” is no different than any other creature feature. It’s gory, slimey and at times obvious. What sets it apart is it’s fast pacing, good performances and stellar creature design. There are also some nifty explosions that surprisingly don’t feel tacked on. At eighty minutes, the film never overstays it’s welcome. It’s a perfect rainy day film! 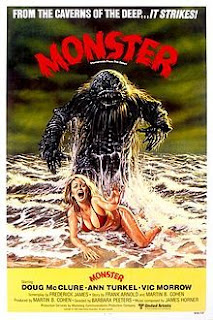 MVT: The creature design. The gooey look and humungous size is a delectable treat. Maybe not the best wording, but you catch my drift.

Make or Break: The finale set at the festival. Watching as the humanoids run afoul of the town set to the backdrop of ferris wheels and cotton candy machines is quite glorious. It embraces the tone built by the film and keeps thing fun and interesting.


Posted by "Cinemasochist" Justin Oberholtzer at 6:00 AM