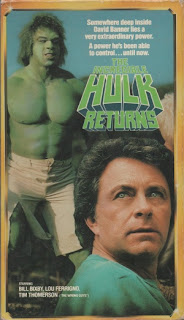 Since my good friend Thor called into the latest feedback episode, I decided it was only fitting to review a movie he was involved in. It’s neither the 2011 adaptation of “Thor” or 2012’s “The Avengers”. It’s not a film where he’s the main star (or even one of the main selling points). He plays the sidekick role. His partner is The Incredible Hulk.

The two superhero heavyweights team up for the Hulk’s big return to television. It acted as a backdoor for a “Thor” television series that never got off the ground. This version of Thor differed drastically from that of the comics. He’s sent to Earth for the same reason, that being a lesson in humility. Outside of the costume design, that’s where the comparisons stop.

In this incarnation, he is controlled by Donald Blake (Steve Levitt), a scientist who discovered Thor’s hammer in a cave. When he hoisted it in the air, he awakened the God of Thunder. To summon him at will, he wields the hammer and shouts, “Odin!”. Despite his smaller stature, he can rule Thor by making him cave to his demands. He’s respectable about this, but still lets it get to his head. 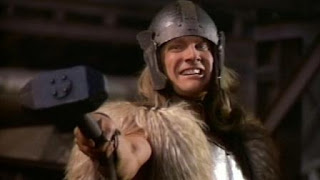 The two join Dr. Bruce Banner (Bill Bixby), who has faked his own death and taken up the identity of Bruce Banyan. You think he could have came up with a better handle for the sake of secrecy. He’s just finished work on a machine that can reverse the gamma rays from his body. Therefore, no more Hulk and no more Lou Ferrigno.

Nobody came to see Bruce Banner officially eliminate the Hulk from within himself. Bixby does an excellent job of almost wanting that to happen, as you feel sorrow for his plight. He’s a man with a monster living inside of him that he can never get rid of. This prevents him from having a serious relationship, which he’s trying to establish with Maggie Shaw (Lee Purcell).

Donald Blake interrupts him before he can finish the task and introduces him to Thor. Thor gets a little testy with Banner, accidentally shoving him into an electrical outlet. This sparks a rage in Banner (pun intended), unleashing the Incredible Hulk. A battle between the two giants ensues in a medical lab. They toss each other around, knocking over tables and high-tech equipment. They eventually crash out of a window, where Blake decides it’s a good time to send Thor back into hibernation. 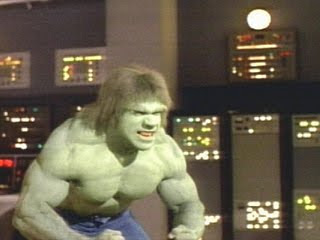 The two eventually team up to wage war with a crime organization whose sole purpose is steal the gamma ray machine and… you know, it’s never quite clear what their goal is. I would assume to make money off of it. I’m just not sure where they could sell this piece of equipment. Do pawn shops deal in the arts of scientific technology?

This aspect of the story doesn’t really matter. The bad guys (one of which is played by Charles Napier) are simply there to be clobbered and demolished by Hulk and Thor. They’re as underdeveloped as a Bonnie Tyler music video. Director Nicholas Corea doesn’t care about them, so why should the audience?

It’s not a major slight against the film. The majority of the television series was that way. Since this is a television movie meant to not only revive the series, yet also start a new one in “Thor”, you come to expect this type of mishmash directing. The story, characters and villains are never truly developed. The only one that is would be Bruce Banner’s plight as The Incredible Hulk. When not focusing on that, it’s smashy smashy time. For that, it serves it’s purpose. 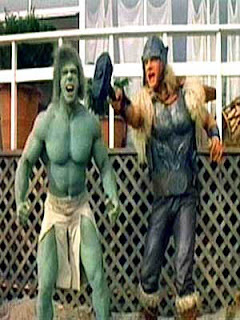 MVT: Bill Bixby as Bruce Banner. Just like in the television series, he gives the character raw emotion and a reason for the audience to care. The fact that I almost didn’t want to see Lou Ferrigno dipped in green paint because of Bruce’s emotional angst is a true testament to Bixby’s skills.

Make or Break: The fight between Hulk and Thor in the laboratory. Up until then, we only got fleeting glimpses of the action. It was here where Nicholas Corea set the tone of the film and assured we were in for some lighthearted superhero fare.