REVENGE OF THE TRAILER - EPISODE 2 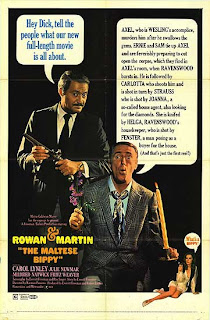 It's been called a "joyless experience", but I beg to differ.   In this latest installment of Revenge Of The Trailer, Shock Cinema magazine contributor and the host of The Mondo Film Podcast, Justin Bozung, talks about the 1969 "comedy" The Maltese Bippy starring Dan Rowan & Dick Martin.

So when Bippy came out in 1969, it was destroyed by the critics, and it literally drove it's audience out of the theaters.  Of course, when you have two comics, who at the end of the '60s had the absolute hippest and politically poignant comedy series on television there's not much else you can do but give them a movie.  Bippy has a Skidoo (1968) feeling to it, and I think you'll feel the same way, in that you too will be wondering exactly how did something like this even get made in the first place?

It makes complete sense that a studio should give Rowan & Martin a G-rated vehicle in which they star as fast-talking porno film producers who get evicted from their NYC studio and have to relocate to a Collinwood type mansion to solve a who-dun-it in upstate N.Y....Flushing to be exact.  What we have here is an farcical and loving homage to the Abbott & Costello formulation.  Personally, I find The Maltese Bippy to be very funny. There are some wonderful bits sprinkled throughout the film which include a breaking of the fourth wall opening sequence, a weird Dick Martin as werewolf riding a bicycle through town that's reminiscent of Paul Newman and Robert Redford in Butch Cassidy And The Sundance Kid, some weird animation, and a very humorous Laugh-In style ending -- trap door and all, and it has a big cast that will make you beg for more.  Check it Out.


MVT:  The bookends of the film, in particular the opening sequence of the film, the first of three endings we are treated to,  as well as the wonderful banter between Dick Martin and the other members of the cast.  On Rowan & Martin's Laugh-In, Martin was notorious for playing the dope and the trouble-maker of the comedy team, and Dan Rowan -- the nice guy alpha.  The roles are reversed here in The Maltese Bippy, and critics ultimately had a major problem with that aspect of this film.  Bippy is very funny... However strange it is.

Make Or Break:  The film is a bit windy overall. But at times, moves so fast it's a bit of a struggle to stay on top of the story line.  We go from a porno movie shoot (titles of films produced by the duo include Jungle Lust and Lunar Lust) to upstate New York to a werewolf in a business suit riding a bicycle around town (puts the werewolf character in Turkey Shoot to shame), and then back into a back-stabbing hunt for the sword Excalibur with some eastern Europeans, a pair of bungling local cops and Dracula.  I know...I know...

Posted by Justin Bozung at 3:00 AM