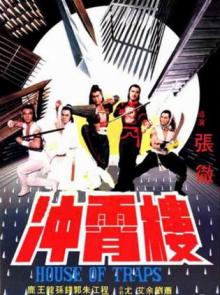 As film fans, we all discovered our favorite directors as we’ve navigated through a sea of movies and each one’s specific filmography.  It usually starts with one amazing film and afterwards we must seek out the rest of this person’s output.  This is followed by a domino-effect of knocking off one great film after another until you reach the more obscure and less than perfect films released.  Selfishly, we want to turn our friends and family onto these filmmakers so that we have someone to discuss their work with, but also to take some credit for turning them onto great cinema.  Additionally, we want them to have the same thrilling experience we had when we saw these films for the first time and have them thank us for the recommendation.  That’s why when attempting to convert our friends to liking what we like, we always give them the best of the best.  It’s too risky to give them one of our favorite filmmaker’s lesser efforts if we intend on them continuing on with the rest of their works.  For instance, if you were trying to convince someone that they should check out the work of Brian De Palma you probably wouldn’t have them start with Raising Cain.  Not a bad film, but it likely won’t knock their socks off.  The masterworks should take priority over all others.  The flawed films should be explored once they’re hooked.  In the case of master martial arts filmmaker, Chang Cheh, his 1982 film, House of Traps, falls into the latter camp.  By no means a bad film, but rather one that should be seen once all of the classics have been viewed first.

Potential viewers of House of Traps should know one thing going in; the plot to this film is convoluted as hell!  We are quickly given the back story to a family feud that has raged on for generations.  The information dump is so quick that we as viewers are a bit confused if the current state of the feud is over greed and the desire for power or simply revenge.  A prince is planning a revolt against his uncle, the emperor, and anyone who wants to join the revolution must break into the emperor’s palace and steal one of the empire’s priceless valuables as a way of showing devotion to the cause.  Anyone who joins the rebellion signs a contract which is kept, along with the valuables, in the titular House of Traps.  This is when things begin to get complicated.  Numerous characters come in and out of the story, there are several double-crosses, and we’re not sure if we’re supposed to side with the prince who’s leading the rebellion or the emperor who has dispersed spies to infiltrate the enemy and learn the mystery of the House of Traps.  Because the plot is so confusing and Cheh is giving us perspectives from both sides of the feud, we’re given a lot of exposition and scenes of dialogue that I can only assume is an attempt to keep the viewer up to speed on everything that’s going on.  It makes for a frustrating watch, especially if you’re just looking for a kung-fu film that’s light on plot and heavy on fight sequences.  It’s best to just let the movie wash over you and not get too caught up with the overly-complicated plot.

There’s still plenty to like with this Shaw Brothers’ production, despite the confusing storyline.  House of Traps has the usual production value that makes these films so charming and what one comes to expect from the Shaw Brothers if you’re already a fan, especially of their kung-fu films.  You get the colorful costumes, stagey set design, awesomely fake facial hair, bright-red blood, excellent fight choreography, supernatural abilities, cool weapons, and cool characters with cool names like the Black Fox.  Most importantly, the movie has the House of Traps and it sure delivers on its promise.  The multistory house has three levels of potential death within it for all those who attempt to take back the emperor’s valuables and the rebellion’s list of supporters.  The ground level has guards hidden behind a sliding wall (How do they occupy their time waiting behind that wall the whole time?) and spikes that rise from the floor.  The second level has trapdoors and the third and final level has a spiked cage and one more surprise that I won’t disclose, as it’s not revealed until the finale of the film.  It’s a very cool set that’s utilized three or four times throughout the runtime and each time it is we learn more about the secrets that the House of Traps has in store.

House of Traps finishes on a high note with amazing fight sequences and plenty of bloodletting.   The very end is comedically ironic, immediately following all of the carnage that has just taken place.  It left a smile on my face and made it easier to forgive the convoluted plot.  It should be noted that this film features the Venom Mob in one of the group’s last films together.  If I were trying to turn a friend onto Chang Cheh’s films, or just classic kung-fu films, this isn’t where I would have them start.  The Five Deadly Venoms or The One-Armed Swordsman would definitely be a better option to begin your education on Chang Cheh, the filmmaker.  For those of us who’ve seen our share of martial-arts films, this is solid and definitely worth a watch if you’re a fan of the Shaw Brothers’ aesthetic.

MVT: The actual house of traps, of course!

Make or Break Scene: The first introduction to the house of traps.