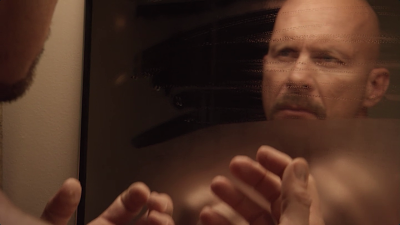 The sort of casual approach I've been taking to this column is to attempt with each new review to focus on a specific type of action, or a movie starring a specific action star. Back in the days when I watched professional wrestling all the time I never thought I'd be writing about Steve Austin, action movie star. I'm still not sure if I'm doing that, because while Mr. Austin is in a movie he certainly isn't a star and the action he delivers hardly qualifies as action. That lets the cat out of the bag I guess, but The Stranger is very much an awful movie with an awful actor in the lead role.

The thing about an action star is usually, not always, they can make even the worst movie seem eminently watchable. Cynthia Rothrock, Jean-Claude Van Damme, Arnold Schwarzenegger, and Jackie Chan (for example) have been in their share of movies that should have been horrendous. The very presence of those actors helped to elevate the film, to make it more than the rest of its surrounding parts. The Stranger puts all of its eggs in the basket that is Steve Austin and hopes that he can carry the film with his style, persona, and presence. That's the biggest mistake The Stranger makes, because Mr. Austin is not able to carry a movie and that means all the poorly done elements of the rest of the film stick out even more.

The biggest problem with The Stranger is Mr. Austin, specifically his ability as an action actor. The film tries to hide his lack of acting chops by keeping his talking to a minimum. That was a smart choice, but the film is counting on the action actor part of Mr. Austin to do more than it can. He's clumsy, awkward, without any flare, and most importantly, super, super slow. Mr. Austin's action scenes move like a cow making its way across the pasture. His moves can be seen two steps before they happen, and his slowness only serves to slow down the actors he's interacting with. As a professional wrestler Mr. Austin was a brawler, and it worked. In the context of a wrestling match his boorish, wear you down with brief flashes of speed, style worked in spades. Translated to the big screen his style is just boorish, and slow, and a pain to watch.

Not helping matters is the direction of Robert Lieberman. I swear, if the same flashback isn't repeated over and over this hour and a half movie would only be about an hour and ten minutes. Some of my umbrage towards the flashback usage I throw at script writer Quinn Scott, but it's Mr. Lieberman who presents the flashbacks in the same manner every single time. The direction of Mr. Lieberman matches the boorish nature of his star for the most part, but during the action scenes he attempts to compensate by filming them as if they were shot in a blender. There's a car chase scene that is bereft of tension or suspense because we're never given any visual space to work with. Mr. Lieberman moves his camera around as if it doesn't matter where the motorcycle or car are in relation to one another and their surroundings. There's nothing worse than a lazy action director who confuses rapid camera movement with the implementation of visually interesting action.

When the best thing I can say about your film is that it's awful it's clear that a lot of mistakes were made in the production of said film. There's very little left to say about The Stranger other than that it is an awful representation of an action film. It's biggest sin is that it gives the very alive and vibrant genre of direct-to-video (or in this day and age I suppose it would be direct-to-BD/DVD) action a bad name There are plenty of great action films that never saw the darkened effect of a theater screening room. The Stranger isn't one of those movies, it probably would have been for the best if both it and Mr. Austin were never delivered upon the wold of action cinema.