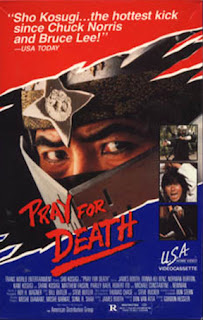 Perhaps more than any other stock character, the ninja typified action-oriented pop culture of the 1980s. They could be found in video games (Ninja Gaiden, Shinobi), on television (Teenage Mutant Ninja Turtles) and certainly in movies (everything from The Octagon to Pee Wee’s Big Adventure). With at least a half-dozen ninja films to his name, Sho Kosugi is among the actors who will forever be linked to this cinematic archetype. While 1985’s Pray for Death is not as familiar as Revenge of the Ninja, nor as zany as Nine Deaths of the Ninja, it may be his best effort in this mold.

Kosugi’s Akira Saito is a Japanese businessman enjoying a comfortable life in Yokohama with his American-born wife (Benz) and two sons (Kane and Shane Kosugi). However, he’s encountered a corporate glass ceiling that will delay his advancement, and his wife thinks this presents an opportunity to put his acumen and entrepreneurial spirit to better use elsewhere. Namely, by owning and operating a Japanese restaurant in a dilapidated urban neighborhood in Houston, Texas.

Akira is on the fence; he regards the U.S. to be an uncertain and especially violent place. Though unbeknownst to his loved ones, Akira isn’t just a dedicated family man with an abhorrence for violence. He’s part of an elite and secretive sect of ninjas, and is bound by the order’s code to keep his identity hidden from the outside world. Inexorably linked to his association with the group is a terrible event for which he continues to carry guilt. After an action-packed flashback and a consultation with his ninja master, he makes the decision to leave for America; he and his wife will have a new business venture, and he’ll be able to leave his regretful ninja past behind him. As a parting gift, his master gives him an incredible masked helmet which Akira regards as a sentimental keepsake without any practical application for his new life. As action cinema has taught us time and time again, all of this will definitely go according to plan.

Not only is the Saitos’ new residence surrounded by graffiti, ghetto blasters, and boozehounds, but its back-room is the exchange spot for crooked cops and criminals peddling in expensive stolen goods. When the gang finds the latest product missing, Akira’s family is suddenly in their crosshairs.

The leading muscle in this group of thugs is the cruel and craggly-faced Limehouse Willy (Booth). Perhaps in an effort to dispel any unfortunate stereotypes the name might suggest -- obese hillbilly wrestler and filthy hobo among them -- Willy is one sick bastard. His laundry list of despicable acts includes, but is not limited to:
While all of this might just be a normal October weekend for Dick Cheney, it’s more than enough to awake the sleeping ninja beast inside Akira. Despite interference from the local police and firm warnings to Willy and his gang, the violence escalates on all sides. When Akira embraces his ninja past to exact revenge, his full range of superhuman traits are on display: skills in weaponry (shurikens and katana), stealth (sleeper holds and smoke bombs), and dogged persistence (he hangs from the underside of an enemy’s moving truck from day through the night). This stretch of the film also finds him making a sword from scratch, and finally donning the metallic mask to create one of the coolest ninja aesthetics in cinema.

Hessler empties the proverbial tool-shed for a wonderfully bloody climax which sees a chainsaw, a sickle, and a logging saw utilized for combat. As I did, many viewers will struggle with the plausibility of the middle-aged Limehouse Willy and the skillful Akira as physical equals during this part of the film. The only logical conclusion I was able to talk myself into, was that Akira was so engulfed in vengeful fury that he was vulnerable to Limehouse’s underhanded and cheap tactics. Admittedly, you may need to go a few rounds with Jack Daniels or do salvia bong rips with your favorite teen pop star before accepting this argument.

The action throughout the film is well-shot and Kosugi brings a physical grace to the fight choreography that lends itself to the notion of the ninja as an almost otherworldly being. The physical environments of the different action scenes are varied and well-integrated into the actual choreography, including fights in a forest and even the bed of a moving pick-up truck. There’s also a creepy scene set in a warehouse full of mannequins that does an excellent job of ratcheting up the tension.

To his credit, Hessler uses slow-motion sparingly and although I observed a couple of examples of the dreaded reverse motion technique, no trick is so overused as to be distracting. In addition to Sho Kosugi’s scenes, his son Kane also gets a few comedic action set-pieces to put his skills on display. I’m not a huge fan of asskicking kids under the age of 12, but these scenes thankfully never approach the obnoxious force-feeding of something like Prince Tarn in Red Sonja, to name one example. However, while obviously excellent, the action is not necessarily the film’s saving grace, nor is it Kosugi’s unmoving and amazingly shiny hair.

At its narrative core, the film is a story of how one’s internal struggle with identity can create unforeseen strife. The character of Akira literally flees to America as a way of escaping an alter-ego that has fomented guilt and personal turmoil. This is his cross to bear and because of the ninja code, he can’t even reach out to his loved ones for support. The film actually opens with Akira’s sons watching a television show called "The Black Ninja," which features a protagonist who they acknowledge looks just like their boring businessman father. They tell their mother that “[the character] looks like Dad” and implore Akira to “learn karate some day [because] you might need it.” Not only is the ninja mythologized by the program within the film, but the Saito children project this hero archetype onto Akira, only to have him actually embody it later on. It would be silly to deny that Pray for Death somehow doesn’t resemble other cheesy artifacts of 1980s action cinema; it certainly does. But in emphasizing themes of identity, writer Booth gives it an added dramatic weight typically absent in these films.

Make or Break: This will seem a tired choice, but it was the climax. Every good action film--particularly those that swim in vengeance--needs a pay-off at the end. Given the variety of weaponry and physical settings, Pray for Death has one of the more action-packed and visually interesting climaxes you’re likely to see from this era.

MVT: I was tempted to go with James Booth because he turns in a great performance as the story’s main villain and also wrote the screenplay. But the best element of this movie is Sho Kosugi. He brings his A-game on both the action and dramatic fronts and if Kosugi was anything less than stellar as the story’s hero, this is just another mediocre ninja film. His embodiment of the archetype is exceptionally well-rounded too: ninja as detective, assassin, spy, and agent of stealth.

While your perception of the film will be influenced by your unique cinematic tastes, Pray for Death is easily the best ninja film ever directed by a German to be penned by an Englishman with a Japanese star and a story set in America. Godfrey Ho, confusing volume for proficiency, single-handedly shitcanned the entire ninja film genre through his absurd overproduction during the late 1970s and 80s. Fortunately, Pray for Death is one of the best ninja films of a very saturated era and certainly worth a view.