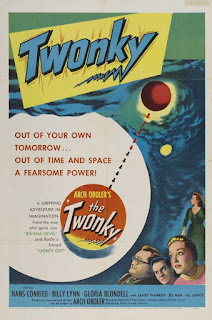 “I had the twonkies when I was a child.” - Coach Trout

“It shaved me today.” - Kerry West

“Something is happening, but you don't know what it is.” - Bob Dylan

A philosophy professor battles The Twonky. Colleges will survive into the dystopian period.

Writer-Producer-Director Arch Oboler has one of the great punchline names (3 vowels and 3 consonants.) He directed Five (1951), The Bubble (1966), and Bwana Devil (1952.) Hans Conried was in Peter Pan and The Great Dictator and The 5000 Fingers of Dr. T. Janet Warren appeared in The Ghost of Frankenstein and Buck Privates. William H. Lynn was in The Outcasts of Poker Flat. The movie is based on a short story by Henry Kuttner. The title music by Jack Meakin sounds like a bonk, a plonk and a twonk.

Meet the device with a 'super-atomic brain.' To give away the secret of 'The Twonky' would be a miscarriage of justice. Maybe the secret of 'The Twonky' is a thing we weren't meant to know. Post-war America met its greatest enemy in the ubiquity of the television set. It is true that no one could anticipate the long-term ramifications of beaming visual media into the home. Conried's character is a philosophy professor; philosophy was dead the minute the television was invented. Finally, in the dystopian future of 1953, Technology will ultimately and totally control our lives; we should have listened to Hulot in Mon Oncle. Conried's protagonist character lives in a palace with a twelve-inch television. Hollywood loves deflating stuffy intellectuals with the introduction of unknown phenomena. Early on there's a joke about 'obstetrical history' that has to appreciated for its ironic understatement. What exactly is a 'red cent'? Who doesn't love a 'wubba-wubba' soundtrack? 'Coach Trout' is a humorous character name. That character is the voice of cynical realism (one who's usually less than functional except to deliver exposition) At one point, Coach Trout drops a load of incredibly detailed information pertaining to the fantastic, and one goes, 'Wait. How did he know that?' Coach Trout orders his students to 'Smash the Twonky!' That's sagacious advice. Then the elderly Coach looks at the co-ed's backside and implies something rather sexual. That wouldn't fly today. An absent wife is compared to an “entertainment.” 'I got no complaints' sounds like a motto of middle-class conformity. There's some special fx magic as the Twonky ties a knot for Kerry West. Disney might have taken this premise and overcharged in the color go-go 1960s; alas, until the third act, most of the movie takes place in Conried's house, and that tends to limit the scope. The trilling on the soundtrack is incessant. The middle part of the last century was a time of much humorous drinking. That television prefers Sousa over Mozart, which might be a preference for the popular over the high-brow.  The police threaten to send our protagonist to Alcatraz. The sassy black maid tells Conried that she has a larger television. The college is integrated, so I guess that's progressive. The Twonky can change genders. That's progressive too. A clerk brags about his experience with 'time-payment merchandise.' The Twonky is as nightmarish as a Dalek. This is something like a slightly more humorous take on a body snatching movie. Women come to collect money and never leave. Is this a horror movie or a comedy? Is The Twonky Oboler's masterpiece? Stay tuned on your orthicon tube to this very channel.

The Twonky is on Youtube in atrocious quality, missing, in fact, the title card. It was apparently recorded from a television broadcast. I want to live in any town where they show on The Twonky on television. I might even watch The Twonky on my Twonky! The movie is 69 minutes long, so there's that to its credit. Other sources give a running-time in the 80+ minute range, so I don't know if anything is missing.  No one wanted a partial Twonky.  File it next to the Babadook and The Hidan de Maukbeiangjow.