Trog has become rather infamous as Joan Crawford’s final feature film appearance. It is quite amazing that someone as talented as Ms. Crawford had fallen to this level, but the 70s and 80s were not kind to many of the big names from Hollywood’s Golden Era including Joseph Cotten, Ray Milland and Ava Gardner. 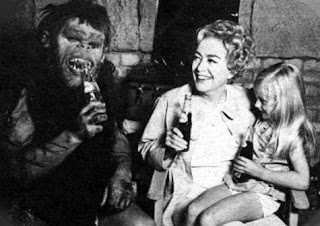 The film opens with a rather unexciting spelunking sequence, with a studio-bound cavern that looks cleaner than my basement. It is filled with cheesy looking stalactites and stalagmites (don’t ask me which is which), which turn out to be important in the grand finale. There’s a really lame jump scare with a lizard, and eventually we encounter Trog. How can I best describe Trog? The overall make-up job is terrible, as he looks like the missing link above the shoulders, but completely modern age below the shoulders, complete with manicured hands and very little body hair. Apparently, he’s super strong and quite angry. Most of Trog’s aggression comes in the form of wrestling moves, with the body slam being his favorite. I half expected him to pick up a chair as some point. 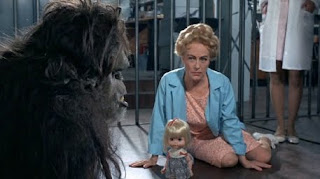 Crawford plays a world famous anthropologist, who lives in the middle of nowhere, England. To be fair, she’s fairly believable as she slurs her way through pseudo-scientific dialogue, theorizing that Trog might have thawed out a la Iceman . She helps him develop as a person with soothing music and a game of catch. Michael Hough shows up as the local cynic; constantly repeating the line “This is a waste of taxpayers’ money”. His acting is so brutally over the top, that he helps Crawford come across as relatively subtle. 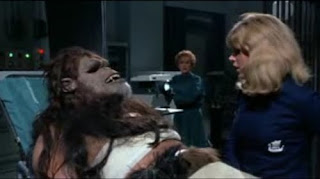 Ultimately, between the '20th Century Ape Man' sequences and the courtroom melodrama, the movie becomes a weird mash up of Escape From the Planet of the Apes and Inherit the Wind. The low point (or high point, depending on your perspective) is a 3 minute sequence in which Trog ‘remembers’ scenes from the past. It turns out that he may have left his cave to see a movie at some point in the 50s, because his memories are really stock footage of claymation dinosaurs from The Animal World (1956). 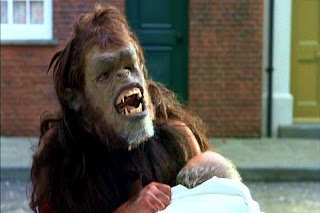 We wait nearly 75 minutes for the inevitable rampage sequence, which is actually worth the wait as Trog does more damage than a gang of football hooligans. The best bit is when Trog hangs a butcher from a meat hook. That image really jarred me as a child, and it holds up ok today. For some reason, Trog picks up an innocent little girl and carries her into the cave. Crawford comes to the rescue, but even she and her magnificent eyebrows cannot full save the day for Trog (the character and the film). 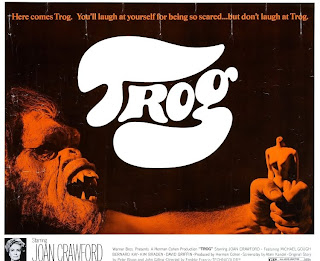 Make or Break: Unfortunately, it is a break. The make-up is just terrible, killing the overall impact of the supposed threat that is Trog. Dishonorable mention must go to his little fur booties.
MVT: Crawford for sure. I’m pretty sure she’s tanked through most of the movie, but she’s still head and shoulders above anyone else. Her bonding scenes with Trog and quite good, and it makes you wonder why she couldn’t show that kind of love to her real life kids.
Score: 5.5 out of 10. Portions of the film fall into the “So Bad It’s Good” category, but there are too many dull moments to make it a true camp classic.