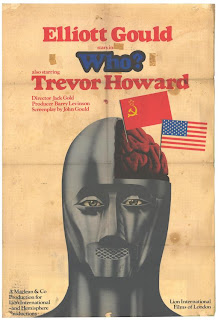 You may or may not have heard of Croatian music teacher, Frane Selak. A train on which he was a passenger derailed and pitched into a frigid river. Flying on a plane, a door blew off; He was sucked out of the plane and landed on a haystack. A bus he was aboard careened into a river. Two of his cars exploded in flames with him in them. He was hit by a bus. He jackknifed a car through a mountain road guardrail and landed on some tree branches. His car exploded hundreds of feet below. Then, in 2003, he won over one million dollars in a lottery. Mixed blessings, huh?

Whether you see Mr. Selak's luck as good or ill, it really can't compare to that of Dr. Lucas Martino (Joseph Bova) in Jack Gold's Who? (aka The Man With The Steel Mask). While in East Germany (this is before the power of Hasselhoff made the Berlin wall topple), Martino's car is run off the road and explodes. The East German doctors are able to save Martino by replacing most of his sensory organs with metal and robotics. They then release Martino back to the Americans, but before he can return as head of the Neptune Project, it must be established that this is, in fact, Martino. This is agent Sean Rogers' (Elliott Gould) task, and when he finds out that communist spymaster General Azarin (Trevor Howard) was involved in Martino's recovery, he becomes even more skeptical of Martino's identity. Now, Mr. Selak may have blown up a couple times and taken a few bad tumbles, but that's arguably better than being turned into a cyborg and having Elliott Gould on your ass. 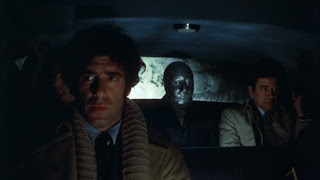 Based on a 1958 novel by science fiction author Algis Budrys, Who? is set during the height of the Cold War. In 1973, the Vietnam War was at its apex, and though most Americans were hopeful for the success of "détente," many were still checking nightly for a "Red" under their bed. This innate distrust and anxiety over an imminent war with the USSR is what propels this movie forward on a narrative level. Rogers is the ultimate cynic, and even when everyone else is convinced of Martino's authenticity, he remains the sole holdout. Consequently, Gould plays Rogers with an icy aloofness, but you can see that he wants to trust Martino. Azarin's involvement, though, precludes this luxury.

On the technical end, the film is well-made, though the sets are spartan at best and utilitarian at worst. The few scenes of action are handled smoothly, if not particularly breathtakingly. The performances are all solid but not Oscar-worthy. It's unfortunate that the cyborg makeup is so poor. I kept thinking of Andy Kaufman in Heartbeeps with the puffy, Jô Shishido-esque cheeks. But this is a low budget film (produced by Barry Levinson, no less), and these are the constraints of that situation. Further, the film is not about being ostentatious and flashy. It wants to engage us on a more intellectual level, and it does so admirably. 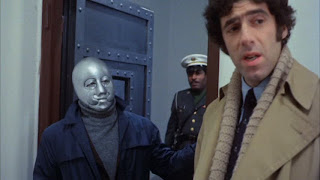 The film is set up like a political thriller in the vein of The Manchurian Candidate or Three Days Of The Condor. However, aside from a couple of low-adrenaline action scenes (including an assassination attempt by thugs in a car bearing a very large red-and-white-checkered flag), the film is more melodrama than thriller. As a result, the audience becomes drawn in not by exhilaration but by the mystery of Martino. The viewer is teased into trying to outsmart the movie, to figure out if he is who he says he is before Rogers does, and it does a nice job of maintaining pace and interest in this way.

This bread trail, if you will, is laid down in the movie by the concept of the unreliable narrator. Whereas films like The Usual Suspects have deceitful onscreen characters, here it is the movie itself that is deceptive. The structure of the film bounces between the present situation, flashbacks to Martino's time behind the Iron Curtain, and flashbacks to Martino's memories themselves. Yet, the flashbacks, with only two noticeable exceptions, are not set off visually by the filmmakers. There are no dissolves, wipes, or wavy transitions. We are simply shown General Azarin and Dr. Korthu (Alexander Allerson) discussing Martino. We can't be absolutely certain that these are flashbacks, per se, because we have not established if Martino is Martino. Is the man in the bed Martino and the man sent back a mole? Is the man interrogated by Azarin Martino or a mole undergoing training? The film doesn't tip its hand in this regard until about the last quarter, but by then we've moved away from the Cold War angle of the film (though we're still intrigued by it). No, by this point, we've moved into the real theme of the film: identity. 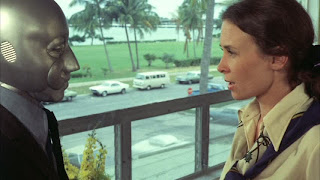 It's been said that science fiction is the literature of change, and I suppose that statement can be interpreted socially or personally. The point is that the advancement of technology affects us as human beings, and good science fiction deals with these issues explicitly. Here, the same technology that saved Martino's life also makes him a suspect. Only Martino knows if he is Martino or not (or does he?), but without his face (and even in possession of Martino's right arm), he cannot be allowed to reclaim his life. This idea is very interestingly revealed in the scenes of Martino's personal memories. Gold employs POV camera techniques to be Martino's perspective as we watch events in his past. We are not allowed to look directly at Martino during these scenes. In fact, we never see what Martino looked like pre-accident at all. It raises the issue of what defines us as individuals. Certainly our outward appearance is unreliable and even events in our past can be retold by ones other than ourselves, but we know who we are at our core. Our individual viewpoints are unique. The quest for Martino's outside identity is ultimately the path by which Martino discovers who he is inside.

MVT: Joseph Bova does a great job with a difficult role. He is able to make us both believe in and distrust him, by turns, and portray a good deal of humanity under a lot of (bad) makeup. No small feat.

Make or Break: The "Make" is the scene when Martino goes to visit his former love, Edith (Kaym Tornborg). On the one hand, her reaction to Martino is supposed to supplant any misgivings we may have about his identity, but the actual content of the scene also gives us more reason to be suspicious. An elegantly complex scene.