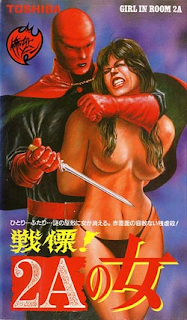 Directed by William Rose (not a pseudonym believe it or not!), THE GIRL IN ROOM 2A is an Italian horror film or a Giallo depending on who you ask, in which young women are abducted by members of a cult and brutally murdered.

Just released from jail for a crime that she claims to have been wrongfully accused of, Margaret Bradley (Daniela Giordano) gets a new start in an unfamiliar town and moves into a spare room in what appears to be a Bed and Breakfast ran by the eccentric Mrs. Grant. It's established very early on that Margaret is either losing her mind or traumatized when she wakes up screaming in the middle of the night and has hallucinations of being in a jail cell. On top of that, a mysterious figure in a red mask briefly makes its presence known. Whatever the case, she's clearly troubled, and nyone familiar with Italian genre cinema of the horror and thriller varieties knows that it's a toss up as to whether this aspect of her character will be further explored or not, as tying up loose ends and explaining certain things was not a strong suit of Italian genre filmmakers at the time.

THE GIRL IN ROOM 2A opens with a sloppily-edited establishing sequence where a woman is quickly plucked from the streets by a group of men and taken to a room in an undisclosed location, where she's subsequently stripped, chained, and tortured. As the woman screams, a spear emerges from a hole in the wall and pokes at her like a steel cock through a Glory Hole. You'd think a creative manner of torture would be imminent, but then someone just unchains her and throws her up against the spear protruding from the wall. Next thing you know, she's fully dressed and being thrown off a cliff. One of the assailants and the apparent supervisor of the torture is the same masked man that our lead character Margaret would go on to see in her bedroom in the midst of a waking nightmare.

In a rather sudden manner, Margaret is approached by a handsome stranger who sneakily asks her to meet him somewhere. Turns out this stranger, Jack (John Scanlon), is the brother of the unfortunate young woman who met an abrupt end at the beginning of the film. Basically, Jack spends the rest of the movie trying to solve the mystery of his sister's death with the help of Margaret, who may be next on the killer's "to do" list for whatever reason. Meanwhile, members of the aforementioned cult are slowly introduced. It's obvious that these cult members not only have delusions of punishing sinners and initiating a "war between good and evil", but that they're connected to the death of Jack's sister. The film makes no secrets about this as the cult is introduced pretty early in the film, but the identity of the masked person is never revealed, which is one of the few elements that propels the mystery angle. The masked killer could be someone close to either one of the two protagonists, and there's always a lingering threat in regards to Margaret's safety throughout the film.

THE GIRL IN ROOM 2A, for the most part, plays out like a Giallo, but only if the lead characters were chasing a killer that didn't exist. Obviously the killer in this film does exist, but this person operates completely outside the radar of the police with a team of people that go out of their way to make the deaths look like accidents. In a way, Jack and Margaret are chasing a ghost, which ties into the film's psychological element. As I already alluded to, the cult in the film have a religious slant, and there are moments where the cult seems to be a distorted reflection of the Catholic church; the religious commentary - if you can even call it that - is lazily explored, but there's more than enough for the viewer to chew on and get something out of it that goes deeper than the horror movie presented at face value.

THE GIRL IN ROOM 2A sounds promising, but unfortunately it doesn't have any particularly strong areas. The film falls somewhere in the middle when it comes to pretty much every aspect, from execution to entertainment value. One of the things that kinda kills this movie is the English dubbing, which is very monotonous; the actors may be doing a great job, but you'd never know it because of how they're dubbed. Another negative aspect of the film is the editing, which I briefly mentioned earlier. Whether or not the version I watched was cut, I have no idea, but there are scenes in the film that don't necessarily warrant any frames removed in regards to censoring, but the manner in which those scenes are cut together suggest that either the film was butchered at some point, or that whoever was responsible for editing the film did a piss-poor job; if I had to guess, I'd go with the latter. In general, THE GIRL IN ROOM 2A is a mess for a plethora of reasons, but mildly enjoyable, somewhat refreshing in comparison to its horror and Giallo brethren at the time, and it has a fair amount of gore and European beauties like Rosalba Neri and Karin Schubert in supporting roles.

Make or Break: There were a number of things that broke the movie for me, namely Daniela Giordano's body double for her nude scene (which is odd considering she's done quite a few nude scenes before and after this), but I'll go with the overall sloppiness of the plot. As I said before, THE GIRL IN ROOM 2A had a lot of promise and there wasn't much in the way of keeping it from becoming a decent little Giallo-horror film, but for whatever reason the ball was dropped somewhere. The film raises so much questions and speculation in regards to the plot and the characters, but the answers range from non-existent to underwhelming. 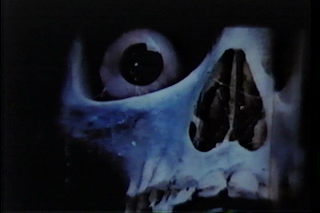 MVT: It would be easy to go with lead actress Daniela Giordano since she's one of my favorite Italian actresses of the 70's, and also because she wasn't really utilized and given leading roles as much as the more familiar faces like Edwige Fenech and Barbara Bouchet for example. I've always admired her because of the projects she picked and because she's simply a good actress, and with this film it's nice to see her in a lead role. However, I'm gonna go with the overall look of the killer as the "Most Valuable Thing": the red mask, the cape, the boots. One of the highlights of the film for me was seeing the killer being chased through a field in broad daylight, which was unintentionally comedic to say the least.

The Disc: The disc available from Cinema de Bizarre features a full-screen print of a VHS rip, which is understandable since the film was pretty much only available on VHS for a number of years. The film's Italian language track is gone in favor of English dubbing, with no subtitles available. As you can tell by the screenshots above, it looks decent for what it is, and there were only about a handful of scenes that were too dark to see what was going on because of the aged print and the lack of lighting during some of the outdoor nighttime scenes. Overall, not bad; watchable and the sound is fine.