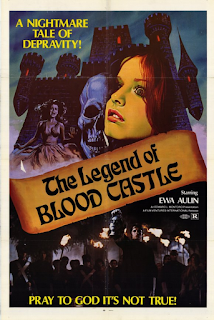 While there have been many films based on the legend of the "Blood Countess" Elizabeth Bathory, BLOOD CEREMONY (also known as THE LEGEND OF BLOOD CASTLE and FEMALE BUTCHER) was one of the very first, and some would say that it's one of the best. Directed by Jorge Grau of LIVING DEAD AT MANCHESTER MORGUE fame, BLOOD CEREMONY is a Gothic horror film set in the 17th century somewhere in Central Europe, and it's an interesting take on the Elizabeth Bathory legend in that it incorporates actual vampirism into the story rather than using the real-life Bathory's alleged penchant for bathing in human blood as a metaphor for vampirism.

In the film, "Erzebeth Bathory" is married to Karl Ziemmer - the Marquis of a region of land that supposedly serves as home to actual vampires. In what ended up being one of the strangest things I've ever seen in a vampire film, a doctor who was believed to be a blood-sucker is exhumed from his grave, staked through the heart, and later put on trial by residents of the village (and a magistrate with the familiar name of "Helsing") while still in his casket and presumably dead. At one point the corpse is even questioned, which is a bit funny.

The aforementioned trial of the vampire coincides with many strange occurrences involving the primary characters. Erzebeth turns to a sorceress when she accidentally discovers that the blood of one of her female servants essentially makes the wrinkles on her skin disappear. What starts out as a trial-by-error experiment sparked by Erzebeth's curiosity (and vanity), the sneaky extraction of blood from a young female virgin turns into a full-blown onslaught as committed by Erzebeth and the sorceress. At a certain point, Karl suddenly dies and comes back as a vampire, and so he teams up with his wife and embarks on a killing spree with her. It's a win-win situation for both parties, as Karl gets to satisfy his thirst for both blood and young women while Erzebeth gets to literally bathe in the leftovers and further her quest for eternal youth. It's also suggested that the sorceress (and old hag, mind you) wants to live vicariously through Erzebeth, as wall as the more prominent of the female servants, Marina, which would explain her motives for assisting both of those characters in their respective desires to achieve certain things, but since she's apparently a sorceress I don't understand why she didn't just come up with a spell to make herself younger.

Personally, I'm a sucker for European Gothic horror movies because of the inherent atmosphere that comes with them. Some seem to nail it more than others, but these films tend to be pretty atmospheric for the most part. BLOOD CEREMONY mostly delivers in that respect but falls short in a few areas. It's arguably a much quieter film that it has any right being, and as far as the atmosphere is concerned, the film could have benefited from a slightly better score; perhaps something a little more Hammer-esque or more ominous than the seemingly stock (but serviceable) horror-movie music used in BLOOD CEREMONY. Visually, though, BLOOD CEREMONY is quite good, as Jorge Grau and cinematographers Fernando Arribas (THE BLOOD-SPATTERED BRIDE) and Oberdan Troiani (a bunch of Peplum films) utilize shadows and lighting to create a haunting and occasionally nightmarish aesthetic.

It should also be said that BLOOD CEREMONY is a bit slow, which is to be expected with most European Gothic horror, in that they're not the most action-packed films, but rather movies that thrive on visuals and creating a certain mood. If you keep in mind that this film was one of the first to tackle the Elizabeth Bathory legend, it's quite admirable. In the context of it being just another horror film based on Bathory, it treads familiar waters and arguably doesn't stand out against films like Hammer's COUNTESS DRACULA or DAUGHTERS OF DARKNESS (a looser interpretation of the Bathory legend), both of which preceded BLOOD CEREMONY. As a whole the film could potentially be a snooze-fest for a lot of people, and the fact that it takes itself very seriously could either hurt or help it depending on what certain movie fans are looking for when seeking this out. At the very least, BLOOD CEREMONY would make a great background movie at a Halloween party because of the foreboding atmosphere, the constant display of dark imagery, and the type of music that you'd hear blasting out of loud-speakers at a haunted house.

Make or Break: The conclusion of the film made it for me. While good, the film doesn't really have a lot of standout scenes or set-pieces, so a lot of what I ultimately thought about the film depended on how the story wrapped up. Luckily it doesn't quite fizzle out, and even though it ultimately plays out like you'd expect it to if you're familiar enough with Countess Bathory, it's still exceptionally haunting. 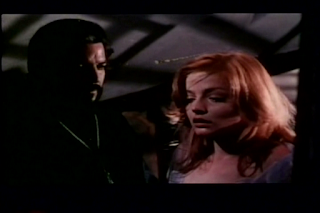 MVT: The most valuable thing in this film, for me, is something - or rather someone - that I haven't even mentioned yet: actress Ewa Aulin. The Swedish actress, who made a name for herself by playing the lead role in CANDY (which also starred Marlon Brando and Ringo Starr to name a few), plays the character of Marina in BLOOD CEREMONY. The best way that I can describe her character is that she's basically built up to be the "Final Girl", in that she's the most prominent character amongst the group of young women who are targeted by both Erzebeth Bathory and her undead husband. Ewa doesn't exactly deliver a knockout performance or anything, but you'd be hard-pressed to find another actress from this era film as equally adorable and sexy as Ms. Aulin. She's also one of those promising actresses from this era of film who made a few movies and quit the business.

The Disc: The version of BLOOD CEREMONY available from Cinema de Bizarre features a letterboxed widescreen print of the film. Even though IMDB lists a running time of 102 minutes and the running time of this particular copy clocks in at 01:26:20 from the beginning of the film to the end of the closing credits, the version available from Cinema de Bizarre is the definitive cut of BLOOD CEREMONY. The censorship of this film is notable, as existing prints of it available (including the version currently made available by Mya Releasing on DVD) feature alternate scenes in which the nudity is either blocked or removed from the film altogether. Judging by screenshots out there of the cut version that was released on DVD, it's apparent that the quality is better than the uncut version that the folks over at CdB obtained, but I'm sure most collectors out there would stupid to overlook the uncut version in favor of the censored Spanish version. It should also be said that the only known existing prints of the uncut BLOOD CEREMONY are in English with hardcoded Finnish subtitles, which is the case with the CdB version that I'm reviewing. The audio is decent at best, but it's at least loud, and while the picture quality is a bit dark, it's still watchable. According to the Cinema de Bizarre website, this is also one of their top sellers.