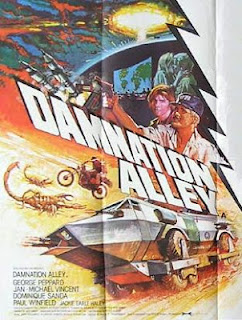 Up until recently, I have never owned a four-wheel drive vehicle. Funny thing that, since I live in a mountainous area with notoriously crappy winters (it's often said we only get two seasons, Winter and August). No, my first vehicles were of the big sedan style (one nicknamed the Deerslayer after nailing said animal on the way back to college the day after my twenty-first birthday and one nicknamed the Fenceslayer for equally calamitous [but far less hungover] reasons). But I have always wanted one of the many fantastic vehicles that cinema has given us over the years (a desire no doubt shared by many of you out there, gentle readers). Who wouldn't want to fly around town in the Batmobile (1966 version, please)? Your daily commute would be ten times more enjoyable, I'd wager, if you owned a Land Speeder (never mind the hovercraft you could build yourself using old vacuum cleaner parts). If I ever learned to ride a motorcycle, I'd give my eyeteeth (okay, maybe your eyeteeth) for Kaneda's gorgeous bike from Akira. But if it's power and versatility you desire, look no further than the Landmaster, as designed by Major Eugene Denton (George Peppard) in Jack Smight's Damnation Alley (aka Survival Run). Me? I had to content myself with a Jeep.

Major Denton and fellow soldier, Tanner (Jan-Michael Vincent) work at a missile base, where they are the guys in charge of firing The Big One. When incoming missiles are detected over American air space, the men do their duty, but sixty percent of the enemy rockets still hit their mark. The Earth's axis is thrown off, and the planet's environment turns to shit (as evidenced by the perpetual light show in the sky). Denton and Lieutenant Perry (Kip Niven) build two Landmasters in an effort to go cross-country to Albany, where radio signals have been detected. But after their missile base meets with an ignominious end (damn bed-smokers), Denton recruits Tanner and Keegan (Paul Winfield), who have both decided to eschew the military lifestyle now that the planet is seemingly doomed, to join in the quest. To reach their goal however, the quartet must first negotiate what Denton has dubbed "Damnation Alley."

The film, adapted from a novel by late science fiction and fantasy author Roger Zelazny, is first and foremost a Road Movie. That it is set in a Post-Apocalyptic milieu is almost tangential. The point of the film is the journey and the encounters that happen along the way. Like Stagecoach and so many before, the emphasis is on forward movement and what happens next. Unlike Ford's deservedly legendary Western, though, Damnation Alley never develops its characters for the most part, and a major portion of the objective of a Road Movie is the arc of its characters. The road (or dirt path or space flight or whatever) is only a metaphor which provides the characters seemingly transitory venues and obstacles by which they evolve. Keegan is only ever a non-conforming artist from the start of his journey to the end. Denton is a military man with a mind toward order and rules. By contrast, Tanner is a wild card who openly defies Denton at every opportunity, even though his disobedience is never proven to be the correct choice. By the film's end, they are essentially the same people. The trek has not changed them at their cores, and it takes away some of the resonance the film could have had.

This extends to the film's treatment of the military. We would expect Denton to be an overbearing, even brutal man whose tactics are not only misguided but outright perilous. Tanner, his opposite number, we expect to be the one whose unconventionality to be the key to successfully completing the mission. This is not so. The soldiers are good, competent, and even get the moral high ground at several points ("it doesn't mean you're right, and I'm wrong. It means [he's] dead."). In fact, it's the capricious actions of Tanner that land him in trouble more than anything Denton orders him to do. This is an intriguing aspect of the film, considering when it was made. Only a few years after the Watergate scandal and the end of the Vietnam War, the public's view of authority and the military was not exactly soaring. Yet, the filmmakers never overtly state that one side is superior to the other or the correct path to follow. Whether this was a conscious choice or simply the producers wanting to appeal to as broad an audience as possible without alienating either, I cannot say, though I personally would suspect the latter. The end product is too light in approach to suggest the creators wanted to inspire deep discussions (and yet, here I am).

The film also centers on the reformation of the family unit, and the attempts by the characters to reconnect to humanity in various ways. So, Denton becomes the "grandfather," Tanner the "son," Janice (Dominique Sanda) becomes the "wife" to Tanner, and Billy (Jackie Earle Haley) becomes the "son" of Tanner and Janice. While there are, of course, other characters, these are the four who constitute the film's focus, and though not formally a family, their interdependence emphasizes the theme of reconnection. In the worst of times, people will cling to the most tenuous of things to make themselves feel like they still exist, they still live and matter. Keegan paints his dwelling with a mural. In Las Vegas, the group happily plunk coins in the remaining one-armed bandits, and even though the thrill of gambling is hollow (money meaning nothing here), it still reconnects them to who they were (emphasized by the use of crowd sounds over this scene). Both Denton and Tanner want to teach Billy different things, not only so that he can help, but so that they can pass down knowledge to the next generation, to perpetuate the species. At a gas station, one of the Mountain Men (Robert Donner) wants to hear Janice play the piano. He needs to feel human again, even if he intends to commit some heinous acts in the immediate future.

The film is also biblical in several ways. There are floods that come up out of nowhere, mirroring the story of Noah's Ark. Billy gets the chance to act out the climactic showdown of the tale of David and Goliath. Las Vegas stands in for Sodom and Gomorrah, though Janice never turns into a pillar of salt (for good or ill). Regrettably, the film then culminates with a Deus Ex Machina that takes much of the steam out of the pilgrimage that has come before, and feels far too neat and easy to be plausible. And that's the thing about Damnation Alley; it poses some interesting questions and sets up some interesting relationships and then leaves them completely uncomplicated. Despite this striving for a surface-only experience, the movie still manages to be thoroughly entertaining, almost daring us to not ask any questions of it. I still did, but that's just me.

MVT: Peppard? Landmaster? Peppard? Landmaster? Since I already went on about vehicles enough in my introduction, I'm going to give my MVT to the late, great Mr. Peppard. I have been a huge fan of his, whether he was snarky insurance investigator Thomas Banacek, snarky Colonel-on-the-run Hannibal Smith, or any character in between. And as always, he puts his all into his performance and pulls out a likable character that could have easily been just another straitlaced, cantankerous career soldier.

Make Or Break: The instant that the Landmasters roll out, your first thought has nothing to do with whether or not these things would actually be practical. Your first thought is, "I want one." I still do.