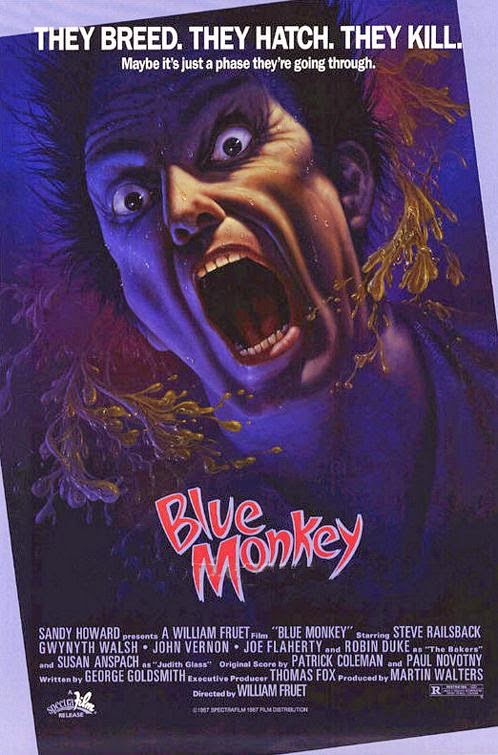 Marwella (Helen Hughes) has a small greenhouse which she tends with great passion.  Another of her (not-so-great) passions is her handyman friend Fred (Sandy Webster), and Marwella is delighted when he asks her to dinner.  After Fred pricks his finger on a plant Marwella had received from the Micronesia area but had been doing poorly of late, he collapses and is rushed to the local hospital.  A large, larval worm emerges from his mouth, and suddenly a little prick is the least of Fred’s troubles.

William Fruet’s Blue Monkey (aka Insect! aka Invasion of the Bodysuckers) is yet another in the long, long line of films I read about way back in the day in the pages of magazines like Fangoria (issue 69, in fact).   And like a great many of those (another would be Slaughterhouse, which I reviewed on this very site some time ago), they slipped through the cracks of time and eventually faded to little more than distant memories.  But before that occurred, they became grand flights of fancy as they played out in the theater of my mind.  Never mind that, one, the theater of my mind would never translate into a coherent film narrative, and two, there is a reason why some things are best left unknown.  Thus, this film looks good on paper, while it ultimately fails on screen.  This is not for lack of material, mind you.  In fact, part of the reason that it fails is the sheer amount of material in it.  By that same token, this same volume is what marks Blue Monkey as a slight standout in the Horror genre.  Just for all the wrong reasons.

If you were simply to read the above synopsis, you would think this was a straight ahead monster flick (or maybe a melodrama about two elderly people falling in love and failing in health).  However, you have a subplot involving the disease that sprang from the same plant as the insect.  You have Jim (Steve Railsback), our hero cop, who is only in the hospital in the first place because his partner Oscar (Peter Van Wart) was shot in the stomach while on duty.  You have the comedy stylings of SCTV alumni Joe Flaherty and Robin Duke as the Bakers, who are expecting their first baby any second now.  You have the tiresome exploits of the grating child patients (one of whom is played by the soon-to-be-worth-a-damn Sarah Polley).  You also have the notion that the hospital is actually a remodeled insane asylum.  But for as intriguing as any one of these elements may be, they fail because they never form a cohesive whole when they’re all put together.  Each of these subplots seems to exist in different films from this one, and they rarely intermingle with each other in any meaningful way.  This would be fine and dandy if the disparate pieces were at least entertaining in their own right, but they’re more missed opportunities as a whole rather than successful fragments.

If filmmakers like David Cronenberg have taught us anything, it is that our bodies hate us and are looking for the first available opportunity to revolt and kill us.  Diseases, viruses, what-have-yous are scary because they are faceless (unless you’re an epidemiologist or the like).  They are the brutality, the caprice, of nature incarnate in much the same way as the animal/insect world.  They cannot be reasoned with, or jailed, or chopped into pieces like a flesh and blood enemy might be.  They embody the loss of control we see in a great many Horror films, and worse than that, they do not discriminate (or in so much as they discriminate according to the wishes of filmmakers/storytellers).  You can employ whatever safeguards you like, but if a disease wants to get you, it will get you.  And even if you choose not to believe in the all-pervasive nature of diseases, this is how they are perceived by a vast number of people.  Ergo, they are excellent fodder for genre films.  You might find it risible that Jason Voorhees could be hiding under your bed, waiting to stab you with his index finger, but a disease could already be inside your body, waiting to burst forth, and that’s suddenly not so ludicrous anymore.  Either way, you stand a good chance of seeing your innards on the outside (at least from a cinematic standpoint).  The only difference is whether they’re taken from the outside in or the inside out.

Naturally, one would think that people should feel safe in hospitals (and especially if one is afraid of dying from disease in the first place).  Yet the vast majority of non-medical personnel don’t take a great deal of solace in these institutions, and this is a significant reason why hospitals are excellent locations for Horror stories.  These are places where people are literally paid to stab, cut, and drill the bodies of their customers.  Even if the practitioners aren’t malevolent like we imagine, relishing the torment they bestow on us, there is always the possibility that they are incompetent (and no, that’s not a statement or accusation on my behalf; merely an observation on the general perception/misperception by the average person).  What if you receive the wrong medicine?  What if they amputate the wrong limb?  What if they leave an instrument inside your body?  The point is people die in hospitals every day.  You may survive your surgery, but there’s no way to tell if there won’t be complications afterward, from infections, to organ rejections, to just sudden fits of death.  Every patient in a hospital is vulnerable, and there are more than enough dark corridors and eerily silent rooms to creep out the most stalwart among us.

Because the threats in Blue Monkey are so impersonal, one would think that it would help greatly if the characters weren’t.  Sadly, they are all stereotypes of the flattest variety.  Dr. Carson (Gwynyth Walsh) is the classic, capable female doctor who instantly turns into a Screaming Mimi when faced with things outside her range (read: giant insects).  Marwella and her blind pal Dede (Joy Coghill) are the matter-of-fact, elderly folks who just happen to know more than they think they do.  Jim is the classic hardassed cop who grinds his teeth and flips out at the smallest piece of bad news (being played by Railsback doesn’t really help in this regard).  The children all act like little adults in that oh-look-how-cute-they-are-but-not-really way that simply makes them annoying rather than charming.  Even John Vernon gets to briefly strut his bureaucratic jerkoff routine for the camera.  Nevertheless, not one of these people manages to be engaging, so following them around on their little misadventures is nothing less than heavy lifting for the viewer.   This is one of those films I think it’s better to read about than experience, and that’s pretty sad.

MVT:  Once again, I have to give the award to the practical effects.  They’re cool to look at when they show up.  That said, they’re shot in such an insignificant fashion (quick cuts, low lighting, strobe lighting, shaky handheld) that you never get to fully appreciate the work that went into them.

Make or Break:  The first scene with the kiddy characters was like a prelude to the kiss of death the filmmakers would deliver just a short way down the road.