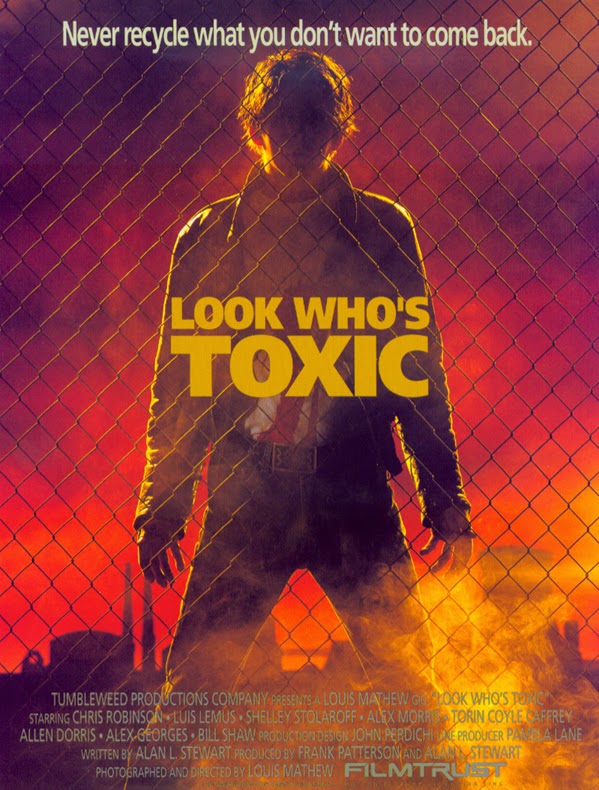 In deathly serious tones, over shots of factories pumping fumes into the air, we’re informed that one hundred and thirty five billion pounds of toxic waste are dumped into our water every year.  Billions more infest our air.  Of all the pollutants, only a handful have been studied for their harmful effects on human beings.  Just imagine what those others could do!  Meanwhile, billionaire industrialist Armond Davis (Chris Robinson) suffers from heart issues (insert joke about not having one here) while merely tolerating the constant protests outside his chemical plant.  Tasking cardiologist Wayne (Allen Dorris) and meat slab Drake (Torin Coyle Caffrey) with finding him an unwilling donor pronto, they prey upon feckless workout nut Bobby (Luis Lemus), and things only get worse once they dump his body in the contaminated water behind Davis’ plant.

Like The Toxic Avenger, which Louis Mathew’s Look Who’s Toxic (aka Bobby aka Toxic Adventure Part 4) attempts to emulate (and wishes to hell it was even remotely as accomplished as, if you can believe that), this film concerns itself with environmental matters and pollution as a springboard for a revenge story.  Outside of that, it could care less about the social issues involved.  When Dr. Reskin (Alex Morris) talks about his findings in the water at Davis’ facility, it’s only to either dress Davis down or to tell a disinterested reporter that the waste in the water could be “life altering” (I wonder what that could foreshadow?).  And fair enough.  This is an exploitation/monster movie, and they’ve been using this tactic for decades.  All you need to do is look at films like Them! or The Horror of Party Beach or Spawn of the Slithis for proof.  So, when it’s all said and done, we can’t fault Mathew for not treating the issue of industrial pollution with the sort of depth and gravity as we might expect from a Sixty Minutes exposé (or even Godzilla Versus the Smog Monster).  There are plenty of other things to fault him for, however.

One of the film’s failings (probably its biggest) is its pacing.  It is positively glacial.  It takes well over half the run time for Bobby to return from his watery grave.  In the meantime, we are treated to endless scenes of Davis musing about how evil he is and how disposable everyone else is.  Never mind that the other main protagonist, Bobby’s girlfriend Susan (Shelly Stolaroff), gets to the bottom of absolutely nothing during her investigation into Bobby’s disappearance.  Further, her being in the film at all is tangential to pretty much everything that happens in the plot aside from acting as a reason to try injecting a modicum of pathos into the finale (it doesn’t work).  In fact, Susan spends most of the film being tied up and/or chased around by Drake (and not in a fun way).  It may not have been so egregious if the scenes between what miniscule action and gore there are were more than simply retreading variations on the same dialogue and story beats we saw in the film’s first fifteen minutes (and felt like it sucked up twice that much time).

There is a saying touted by screenwriting gurus (whether it was Syd Field, Robert McKee, or some other, and regardless of how you feel about their processes and teaching methods is inconsequential) that scenes should start late and end early.  I have always understood this expression to mean that a screenwriter should stay focused in each scene, relaying necessary information and then moving on.  Every second of a film costs a lot money (or at least they used to), so blowing it watching a person brew a pot of coffee from start to finish is ludicrous.  Otherwise, there had better be a solid reason why this process needs to be exhaustively detailed for the audience (at the risk of costing a film the other thing it cannot afford to squander: and audience’s patience).  So, if the action of a scene starts at a point of dramatic conflict and continues through another point (or even multiple points, so long as it doesn’t lag drastically or descend into repetitiveness) and then exits, tension and interest are likely to be maintained, and anticipation of what comes next is likely to be generated.  In other words, the script is well-paced.  Unfortunately for Look Who’s Toxic, double threat writer and editor Alan Stewart has a hard time doing this both on the page and on the screen.  The example that sticks in my head most prominently (in a movie loaded with prominent examples) is when Drake drives Davis’ limousine to the chemical plant.  We watch as the car slowly pulls in from frame right, until we can almost make out the emblem on the trunk.  Then, after Davis decides that these pesky protestors are going to be difficult to simply plow through, he instructs Drake to take him to the rear entrance.  We then watch as the limo now slowly exits frame right in reverse, until it is completely gone from sight.  Now, if you thought that the last couple of sentences were painful to read (y’know, as opposed to the rest of my review), picture in your mind how painful it is to watch.

Another major failing of the film is its tone(s).  The title alone clues you in that the filmmakers wanted to look like they were being irreverent, but really it just looks like they didn’t give a shit at all (come on, a play on Look Who’s Talking?!).  Remember how I said the opening monologue/info dump was deadly serious?  Well, cut to the very next scene in a hospital, where a woman is in labor but refusing to open her legs for the doctors, whinging about the pain.  Her husband (who I am almost absolutely certain holds a paperback copy of Ira Levin’s Rosemary’s Baby in his hand) pleads with her and grouses about all the birthing classes they took.  Shunted to the waiting room, he lights up a smoke, right next to a no smoking sign!  Hilarity!  The fake television station that keeps us up to date on the protestors outside the chemical plant (read: a reporter appears every now and then and reminds us that people are protesting outside the chemical plant) goes by the call letters KRAP.  Get it?!  That so much more of the movie is played straight (and if it isn’t, it’s either subtle to the point of subliminality, or I’m as dense as cement) is a massive misstep.  It’s literally just people talking, and worse than that, saying the same things over and over again (imagine the worst soap opera in the world and multiply it by one thousand).  What The Toxic Avenger gets right is that it is positively gleeful about its ridiculousness and violence (I maintain that it is the franchise for people who love “dead baby” jokes), and it both starts and finishes from that perspective.  I’m not saying that tonal shifts are bad; I’m saying they are badly handled here.  Sure, once the abysmal Bobby Monster makes his appearance, Look gets a tiny bit more interesting.  Yet even then, it treats every scene like a chore to be finished rather than anticipated and enjoyed.  If you’re looking for chores to do, come over and clean my house.  I won’t force you to watch Look Who’s Toxic.  I promise.

MVT:  The monster attack scenes are definitely gory.  They’re also too little and too late to save this dreck.