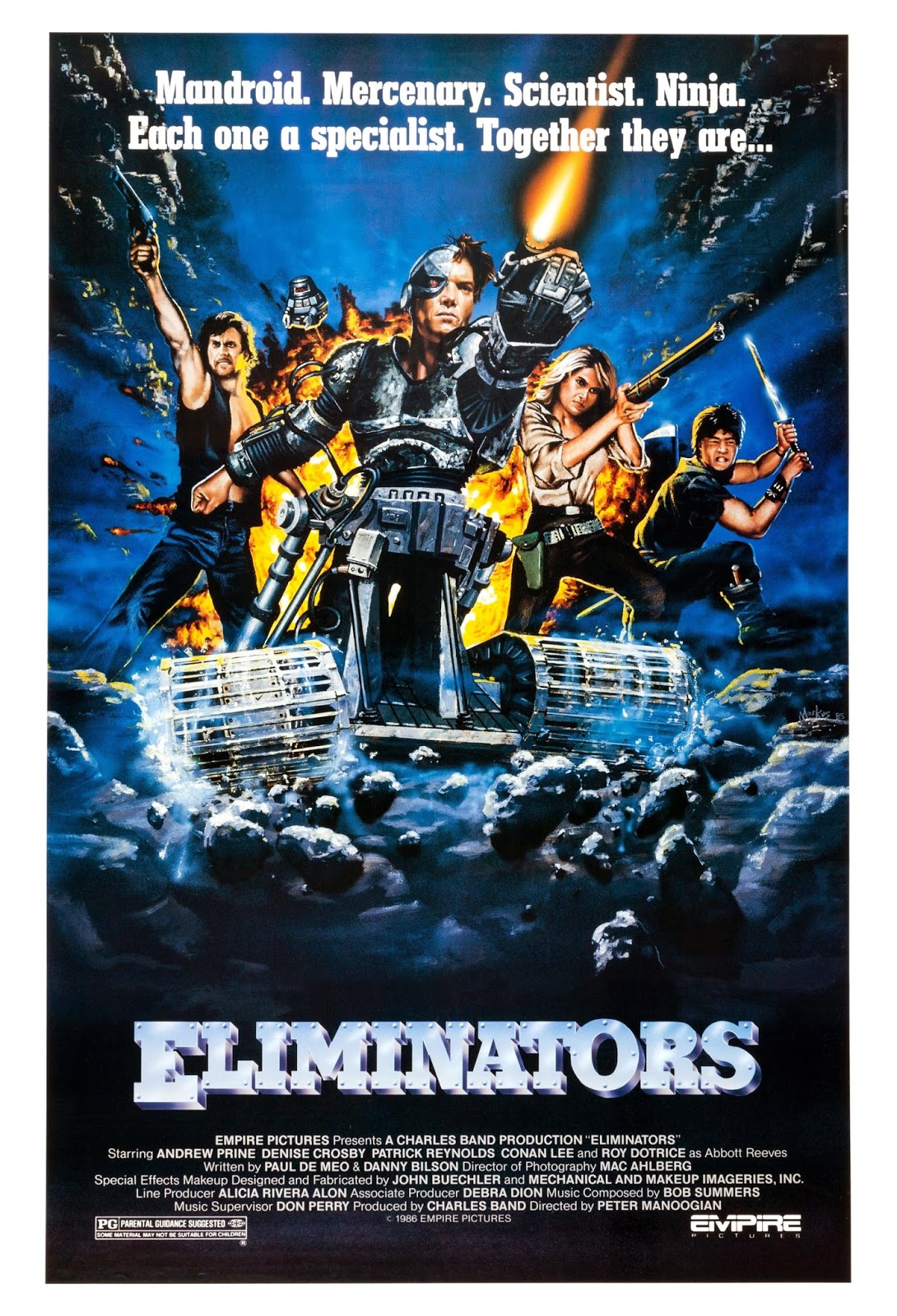 The Mandroid (Patrick Reynolds) returns to the present from Ancient Rome and dutifully transfers his loot to mutilated mad genius Abbott Reeves (Roy Dotrice).  Defying Reeves’ command to wipe the cyborg’s memory and have him dismantled (because, you know, a Mandroid would totally not be helpful at all in a fight or anything), kindly Dr. Takada (Tad Horino) sacrifices his life aiding the Mandroid’s flight to freedom.  Making his way to robotics expert Colonel Nora Hunter (Denise Crosby), the Mandroid enlists her help in going back to stop Reeves.  Along the way, they hire degenerate guide and boat captain Harry Fontana (Andrew Prine, playing the Michael Douglas/Peter Fonda role and wishing to Hell there were a giant Grizzly around to kill him) and pick up super ninja Kuji (martial artist and once-promising Action film newcomer, Conan Lee).

Peter Manoogian’s Eliminators is a prime example of selling the sizzle, not the steak, as Elmer Wheeler would say.  All you need to do is look at the film’s poster for confirmation.  You have all four of the movie’s heroes practically bursting forth from the one sheet in dynamic action poses.  If all you saw of this movie was the advertising materials, you would believe that it was a superhero-esque team film.  What you get, however, is decidedly different (one of the reasons a lot of people enjoy trailers and posters more than the pictures they promote).  This is simply the way of many a low budget effort.  A trailer lasts a few seconds to a couple of minutes, and a poster usually sells a film’s most exploitable elements in one static image (or they used to; today, they’re little more than nigh-indistinguishable, Photoshopped images of floating heads over a limited choice of background images, that is unless some artist is commissioned to create [or just feels like creating] an actually individualized image which you would likely never see in a theater near you, regardless [unless you happen to have a cool rep/arthouse theater in your neighborhood, and even then…]; end rant).  Naturally, the expectation-to-delivery ratio of the films themselves tends to be a bit lopsided.

But films need to have connective tissue between action set pieces, and this holds even truer for small budget movies.  Low budget films simply cannot afford to have wall-to-wall action.  There needs to be some time spent getting to know the characters in some capacity in order for us to care at all about what happens to them (they don’t need to be likable; they do need to be compelling).  Further, if a film is nothing but action, chases, explosions, and the like, it becomes tiresome (even if the viewer is a self-professed Action Junkie).  A classical narrative film’s structure needs to be arranged in peaks and valleys.  If it hits the ground doing a hundred miles an hour and doesn’t let up for any sort of interaction outside of action, a viewer becomes bored and starts thinking about other things to do (or wishing they were doing other things).  Pacing is key to a low budget Action film, and it’s something that more often than not is mishandled.  The filmmakers almost get it right here.  The actors are talented and interesting enough that they make the long stretches between action sequences bearable.  However, they also seem to forget that there needs to be interesting things for them to do in these spaces, so bearable is as far as they go.

With this in mind, the characters themselves are about as cliché as cliché gets.  They’re cyphers with no truly distinguishing characteristics at their cores.  So, Harry is a scruffy loner with a heart of gold.  Nora is a hardassed woman doing a “man’s job,” while also being feminine (she has to prove her worth by fixing the motor on Harry’s boat, but everyone stops to gawp at the side boob she flashes when changing out of her wet tank top).  Kuji is the centered living weapon who is out for vengeance.  The Mandroid (aka John Doe) is the man without a past and out of time (literally and figuratively).  By assembling these archetypes, the filmmakers attempt to create an ersatz Fantastic Four (with Dr. Reeves acting as their Doctor Doom), even though two of the members have no super powers to speak of (which is odd to me, all things considered), and they don’t have the rapport that superhero teams typically share.  The characters are forced together and then forced to stay together, because the script says so.  Harry is a scheming sort of guy, out for a buck and himself, but he gets miffed awfully easily when he’s told his services are no longer required (especially dumbfounding since he hardly knows these people).  Nora comes along because she just so happens to have been the person who designed the Mandroid’s robotics.  Kuji literally shows up in the third act and becomes a loyal (and trusted) team member in seconds.  I’m sure there are weaker kinships in films, but this stuff is still paper thin.

As set up in the introductory scenes, the Mandroid’s memory plays a key role in the story, and I think it’s to the filmmakers’ credit that he is the main protagonist, since he’s the sort of character normally relegated to a supporting role (The Partner, The Henchman, The Villain, et cetera).  The idea of the past plays out in several aspects.  Reeves is obsessed with the past, and this preoccupation motivates the time travel element of the story (something I’m surprised wasn’t played up more).  The Mandroid’s memory is manipulated by Reeves, and everything from before he became the Mandroid is lost to him (read: his identity and by extension his humanity).  The flip side of this dehumanization is Reeves, who has kept himself alive via grafts, transplants, and transfusions (assumedly in response to some type of genetic or aggressive disease, since his face is disfigured when we first see him).  He wants to make of himself a sort of Mandroid 2.0.  Yet Reeves has the advantage of maintaining his personality and memories (which help form personality), and since his identity is evil from the start, his Mandroid-ization is the completion of a circle.  The (good) Mandroid knows that he had a life and a family, and this loss (even if only in a cognitive sense) is enough for him to despair of his condition.  This contrast emphasizes the struggle of the main character and should give the character a healthy dose of pathos with which the audience can engage.

The big problem here is that, outside of mentioning John’s past, it’s not investigated in any detail.  Apart from a photograph, he has no tether to his pre-Mandroid past, so we can feel for his loss, but we can never know its true depths, because we never learn about his past relationships.  Perhaps that was partially intentional on the filmmakers’ part: by not giving us a glimpse into his past, we understand his loss and emptiness that much more (that is, we may empathize through this feeling of incompleteness).  Unfortunately, ignorance is not always bliss any more than knowledge is always ecstasy.  Consequently, like the rest of Eliminators, this attempt only works by about half.  It’s a fun, mildly entertaining half, but I couldn’t help thinking that the other half was so close to getting it right I could almost touch it and turn the total experience into one whole ball of joy.  So near, and yet, so far, I suppose.

MVT:  The main idea is intriguing, and it’s something there wasn’t a ton of in the mid-Eighties.  Plus, it’s ambitious on its face, so points for that.

Make or Break:  The big showdown works well enough, under the circumstances.  Of course, it also resolves itself in a headscratchingly unresolved way.  You’ll know what I’m talking about when you see it.