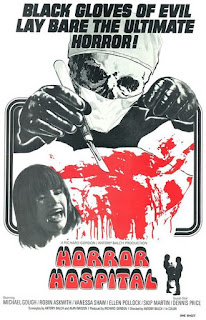 Hospitals are innately scary for those not involved in the medical profession (I’ve probably done this exact intro before, but a little self-plagiarism never hurt anyone).  Here’s a place where the human body is parts of a machine, a place where blood and innards are routinely let free from their skin prisons.  People go there when they’re in pain, and part of the anxiety of the place is that they don’t know whether or not they’re going to experience still more pain during the healing process.  Moreover, there is the fear of not knowing what’s ailing you until some nebulous diagnostic process is complete.  Is that stomach pain just gas, or do you have inoperable cancer?  Of course, doctors and nurses care about the people they see, but there’s also a necessary aloofness they adopt by necessity that only adds to the unease of being in one of these places.  And then there are the multitude of insane doctors of the cinema who want to ravage your body, experiment on you against your will, build monsters out of corpse pieces, and so on.  Admit it, you may like the guy who comes around a couple times a day to read your chart and prod you with sharp metal things, but deep down you’re pondering if he’s simply browsing over you like the headlight section of an auto parts store.  Medicos like Dr. Storm (Michael Gough) in Atony Balch’s Horror Hospital (aka Computer Killers aka Doctor Bloodbath aka Death Ward #13 aka Mad House aka Frankenstein’s Horror-Klinik) go a step further, disguising their misdeeds under the guise of spas, rehabs, etcetera, where pain and torture is the last thing on the minds of his unwitting victims (quite literally).  Which reminds me, I’m due for a few booster shots.

Jason (Robin Askwith) is a young songwriter fed up with pretty much everything in groovy London and stressed to the gills.  Responding to travel agent Mr. Pollack’s (Dennis Price) advert for a cheap getaway, Jason heads off for Dr. Storm’s “health hotel.”  Along the way, he meets up with Judy (Vanessa Shaw), who is on her way to the same place to find her Aunt Harris (Ellen Pollock), a former whorehouse madam.  Things turn suspect pretty fast once the budding young couple arrive at the estate, as they are placed squarely in the sights of the nefarious Storm and his twisted cohorts.

Horror Hospital is very clearly modeled on Robert Fuest’s superlative The Abominable Dr. Phibes.  This is evident right from jump street, as the film opens with Storm and his diminutive henchman Frederick (Skip Martin) sitting in the doctor’s car waiting for a couple of escapees to stumble by.  Storm is dressed in a natty black ensemble which includes a wide-brimmed fur hat.  The car has a couple of blades that pop out of the sides to decapitate the youths (I still can’t figure out exactly how, because the blades appear far too low to accomplish such a task), dropping their melons into handy burlap sacks located just past the blades.  The oddities pile up, as there is a silly putty monster who occasionally snags a new victim.  The water tap in Jason and Judy’s room runs red with blood (“Don’t forget to brush your teeth,” Frederick’s ominous line to the two is one my brothers and I imitated for a long time after we first saw this film way back when).  Storm’s “computer killers” are always in composed order, the settings they are in organized tableaux.  The doctors in both films are crippled in some fashion (Phibes can’t speak without aid of a gadget, Storm is wheelchair-bound), but are also hiding very gruesome secrets behind their surface infirmities.

Horror Hospital doesn’t have the visual imagination of Fuest’s opus, however, and Gough plays Storm in much straighter fashion than Vincent Price’s Phibes.  What Balch’s film does instead is amps up the salacious elements.  Real raw calves’ brains are served for dinner.  Shaw gets naked a few times, and her character hops into bed with Askwith’s pretty fast under less than romantic circumstances (and difficult to understand since Jason’s as magnetic as a sheet of paper).  Pollack, an overtly predatory gay character, casts his eyes to Jason’s crotch (the camera follows suit) and “hints” at the fun the two of them could have.  There is blood all over the place in the film, as well.  Aunt Harris used to run a brothel and has settled nicely into the role of Storm’s primary aide (a flesh trade of another sort).  And let’s not forget the malevolent dwarf who lives to taunt Storm’s guests.  This is a black comedy with a sleazy, populist bent, interested in giving the crowd what it wants served between two thick slices of wry.  It’s a grand guignol filled with trashy, modern sensibilities.  If the two films were adult magazines, Phibes would be Penthouse and Hospital would be Hooker (and, hey, we know there’s a place for both, right?).

Horror Hospital deals with youth culture in an interesting way.  As we’re introduced to Jason, he’s watching a band he wrote a song for do it a disservice, and he loudly vocalizes this to the crowd around him, going so far as to call the band’s singer a “faggot.”  He greets Judy by telling her he’s totally not going to rape her (easily one of the most charming opening lines I’ve ever heard) then proceeds to mooch food from her.  Jason is a snotty little ball of attitude who believes the world owes him something, and he’s not above sticking his thumb in the world’s collective eye to get it.  Judy is played more innocently as she almost immediately opens up completely to Jason with doe-eyed earnestness.  That she becomes romantically involved with Jason aligns her with Jason’s world view, and so she must be punished along with him.  In fact, all of Storm’s patients are young adults.  He is taking vengeance on the young and able-bodied out of self-pity for his own condition, making them his slaves and removing their troublesome individual identities (in essence, he’s the ultimate grumpy old man).  Naturally, the tables will be turned on Storm and company, and this presents us with a validation of the cocky perspective of the Jasons of the world.  Simultaneously, their willingness, even eagerness, to use Storm’s appurtenances against him states that they finally become like him (as all youth eventually molts, transformed into the establishment it railed against for so long).  The insanity of Storm’s world is contagious and a valuable educational tool for the harsh reality that young people need to learn in order to not only survive but dominate.

MVT:  The film has a terrific pulp, camp sensibility that helps it transcend its shortcomings with something odd or creepy around every corner.

Make or Break:  The opening sweeps you into the film’s world handily, and, like Frederick is bade by his master, makes “a clean job of it.”