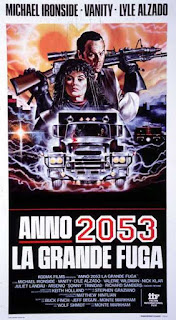 Man, you never hear anyone talk about the depletion of the Ozone Layer anymore, do you?  Back in the late Seventies through the mid-Eighties, all you heard about was how humans were accelerating its destruction through our love of chlorofluorocarbons (I remember fast food joints like McDonald’s being particularly lambasted for their use of Styrofoam containers for their delicious burgers; And why have they not brought back the McDLT?  That’s right, because it was useless).  Everyone was petrified that the holes in the Ozone Layer were going to kill us all like the Eye of God opening wide to annihilate us and our evil ways.  But these days, almost no one ever brings it up.  Maybe this is because the erosion has slowed because we changed our ecological policies (though someone please tell me how mandating that all lightbulbs be replaced with ones that contain mercury gas was a good idea [yes, I know that some of them don’t have it, but how many people do you know who actually read the packaging before buying them?]).  Maybe it’s because we’re all caught up with Global Warming as the eco-disaster du jour, and the Ozone Layer just gets swept into this bin.  Or maybe it’s because Monte Markham’s Neon City has already shown us what the Ozone’s obliteration would actually be like, and we’re mostly okay with that.

Harry Stark (Michael Ironside) is an ex-Ranger-turned-bounty-hunter who scours the Outlands picking up and picking off perps.  Capturing super-wanted criminal Reno (Vanity), Stark is forced to escort her up North to the titular metropolis aboard Bulk’s (Lyle Alzado) camper-turned-transport.  Alongside a microcosm of characters, Stark weathers the travails of the post-apocalyptic world, but what’s waiting for them in Neon City may not be what they expected (but it mostly is).

As the film opens, it feels like a typical post-apocalyptic movie.  The land is barren.  Everyone dresses like a Tusken Raider auditioning for Duran Duran’s “Union of the Snake” video.  People have been reduced to their basest needs for survival.  Once Stark and Reno get to Jericho Station, however, Neon City becomes a remake of John Ford’s Stagecoach.  This is no real surprise.  Stagecoach has been remade and stolen from a nigh-infinite amount of times.  I know that Neon City is compared to the Mad Max films, but that’s a tenuous connection in my mind and the default comparison for post-apocalyptic movies.  No, this is Stagecoach.  Granted, the characters don’t fit one-to-one between the two films, but they’re certainly similar enough.  So, Stark and Reno, together, are the Ringo Kid character.  Stark is the antihero, and Reno is the outlaw being taken to face justice in Lordsburg.  Further, Stark has a grudge he needs to settle once he reaches his destination.  Sandy (Valerie Wildman) is the hooker with the heart of gold a la Dallas, though she isn’t ostracized.  She also has a past with Stark that illuminates how she got where she is.  Twink (Juliet Landau) is the Lucy character, and if anyone is treated rather coolly in the group it is her, due to her moneyed status (she has a book [by Agatha Christie], a rarity in this world).  Bulk is, naturally, Buck, and Alzado plays it with almost enough charm to at least get his feet inside of Andy Devine’s shoes.  The other three characters, Dickie (Richard Sanders), Dr. Tom (Nick Klar), and Wing (Sonny Trinidad) have aspects of the remaining Stagecoach characters in them.  Markham gives them all some distinction and adds in original touches of back story and motivation, though they don’t feel nearly as solid as in Ford’s film.  Instead, they feel like characters.  Oddly, it’s enough for this film.

One could ask the question, “why neon?”  Cinema depicting the future is rife with the stuff, because it looks futuristic (never mind that neon signs were basically invented circa 1917).  More than this, however, is that it is bright, colorful.  In the context of this film, it is upbeat.  It symbolizes hope, and hope is something which the vast majority of post-apocalyptic films embrace.  After all, the worst has already supposedly happened, so the struggle for survival against the brutality of this new world has to lead to some kind of positive.  Even when the protagonists of such films can’t (or won’t) partake in this hope (Snake Plissken in Escape from New York or Max in the Mad Max films [who, more often than not, plays the role of Moses, leading a persecuted people to safety but is not allowed to enter the Promised Land himself]), even when they act aloof and self-serving, they will always do the right thing and protect others.  Stark does his damnedest to be disassociated, but the script keeps giving him feelings.  While he takes charge, he trusts in Reno enough to uncuff her.  His past with Sandy is an open wound about which he doesn’t mind playing passive-aggressive.  He strikes up a romantic relationship culminating in a gentle love scene.  The problem is that, for this kind of film and this kind of character, it works better for them not to say anything.  Ironside can certainly act well enough that he shouldn’t need to do and say the things he does, but the filmmakers either didn’t trust in their talent or their audience enough to take that risk.

This goes across the board for the film.  It wants to give depth to its characters, but it wants to do it in nothing but broad, melodramatic strokes.  It wants to give us action, but it doesn’t know how to block, shoot, and edit it in a dynamic, organic fashion (this, more than anything else, really lets its budget show through).  Its pacing is uneven, with dramatic sequences stretching on far too long and action sequences stacked one on top of another, so they bleed into each other and feel contrived and forced.  It wants to show us that this world is fucked, but it wants to give its heroes a smiley ending.  I think that Neon City is better than its reputation would lead you to believe (assuming it has much of a reputation outside of IMDb user reviews), but I also think that its flaws keep it from being a diamond in the rough.  More like a seed in the fertilizer.

MVT:  The cast is solid, and they do what they can with the material.

Make or Break:  The scene where the transport passes through a Bright (see the movie, if you want to get the reference).  It is one of the few well-balanced beats in the whole movie and proof of what this could have been.