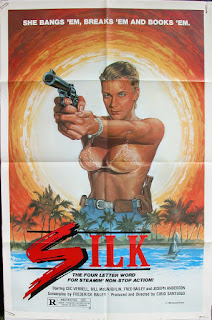 We’re all familiar with the expression “smooth as silk” (even the titular character in Cirio Santiago’s film knows it; “Because I’m so fuckin’ smooth”).  We’re all familiar with how the material is produced, as well (from the butts of caterpillars, amongst other creepy crawlies, just in case you weren’t).  For the life of me, however, I’ve never understood its appeal.  Sure, it looks nice and shiny and supernaturally wrinkle-free.  I get that it’s considered a luxury due to the arduous process of harvesting it (have you ever tried to milk a caterpillar?  Me neither, but I can’t imagine it’s easy).  I get that it’s exotic due to its origins in ancient China (at least to Westerners; Do people in the East just think of it like we do polyester?).  Thing is, I don’t particularly care for the feel of it.  It’s too smooth.  Despite its organic nature, it feels unnatural (again, like polyester, which I would, frankly, prefer).  I wore a pair of silk boxers once.  Once.  The constant, smooth sensation it provides just made me very self-conscious about how things were rearranging themselves down there every time I moved.  I can’t even imagine how much this gliding would irritate my nipples were I wearing a shirt made of the stuff.  I could see its worth in the ascot department, but I think that’s as far as I’m willing to go.  If you dig on silk, more power to you.  Give me cotton any day of the week.  Nice, plush, sweat-absorbing, snug cotton.

After massacring a bunch of thieves, intrepid cop Silk (Cec Verrell) finds herself following the trail of head gangster Austin (Peter Shilton) as he smuggles something somewhere.  Meanwhile, a couple of Nam vets run around killing and mutilating people.

Silk, the character and the film, is practically a carbon copy of George P Cosmatos’ Cobra, the main differences being that the protagonist is a woman, and she doesn’t cut her pizza with a pair of scissors.  Silk also borrows heavily from the Dirty Harry playbook (at one point, she has a villain dead to rights and says, “How do you feel, Slick?  Feel like takin’ the big ride?”; Of course, he does).  She wades into action in a heartbeat, climbing trestles, jumping on trains, leaping from rooftops, and shooting the shit out of bad guys with unerring accuracy.  And Silk is as disassociated with the violence she causes as any male action star ever was.  Maybe moreso.  In the opening sequence, she watches as the thieves’ car explodes into flames.  Santiago shoots Silk’s reaction in slow motion, her ice-blue eyes peering satisfactorily and disinterestedly at the deaths she brought forth.  The loss of life means nothing to her, because criminals, from the pettiest to the vilest, don’t deserve to live.  Her first rule of dealing with the lifestyle of a cop is “Don’t let it get to you.”  On the one hand, this makes sense, because there are surely a great many things about the livelihood that could desensitize a person.  On the flip side, though, it also means that one must be desensitized in order to kill crooks.  They must be dehumanized in the eyes of justice, unworthy to exist.

Silk, the cop, is, in effect, a macho hero with female genitalia (which we don’t get to see, in case you were wondering).  She wears her hair slicked back.  She pauses before working to don a fingerless glove, but she doesn’t balk at getting her hands dirty.  The filmmakers, simultaneously, enjoy showing off Verrell’s female attributes.  Pulling herself over a ledge, we get a nice view of her hard nipples poking through her tank top (I guess it wasn’t made of silk?).  The camera also delights in focusing on her butt in various tight pants.  You can’t fault the filmmakers or the audience for this stuff.  Both know what they want, and both get it (plus, Verrell is strikingly beautiful).  For all of her testosteronic attributes, there are attempts to feminize Silk.  As the police celebrate a solid bust (you know, the kind where most of the perps are dead), Silk sits to the side, aloof.  Fellow cop Tom (Bill McLaughlin) approaches her to join in on the fun.  Silk tells him to meet her at her place.  This romantic relationship with a fellow officer carries tones of a teacher/student affair, Tom being a bit older and Silk’s superior.  When they go out, Silk wears dresses and does her hair up in curls, the opposite of her masculine appearance at work.  She needs Tom to provide a grounding against the rough life she leads, even if only physically.  Their romance never comes across as being between equals.  Tom leads the dance, and Silk follows, taking away some of her badass cred.  Part of the problem lies in the fact that Verrell is simply not a very good actress.  She can swing the deadpan delivery necessary for wasting bad guys, but she’s incapable of changing it up and actually showing emotion when it’s called for.  She tries to act everything with her piercing eyes, and it just doesn’t work (this is not helped at all by her covering them up with sunglasses in several scenes; Instead of playing enigmatically cool she’s simply inscrutably wooden).

The film’s plot is incredibly convoluted.  I’m sure it made sense on paper to Santiago and company at some point, but it’s confusing on screen.  For this film, however, it’s also unnecessary, and Santiago understood this.  All we need to know are these are the good guys, those are the bad guys, and there are a lot of punches, gun shots, and explosions between the two.  The stuntwork is well-handled, and it appears that they actually allowed Verrell to do quite a bit of it, which helps sell the copious action.  I suppose on the one hand it’s unfair to criticize Silk for being so devoted to its action aspects, as it delivers on them so well.  That being said, without a strong story to hold the set pieces together, it becomes little more than a highlight reel.  Granted, a slick (dare I say, smooth as silk?) highlight reel, but one, nonetheless.  For the undiscerning action junkie, this movie will work a treat.  For everyone else, it’s more like a snack you’re unsure if you regret or not after the fact.

MVT:  Santiago’s direction is tight and slick.  It’s his writing that needs to catch up with this skill set here.

Make or Break:  The opening action scene sets the table for the film, both good and bad.