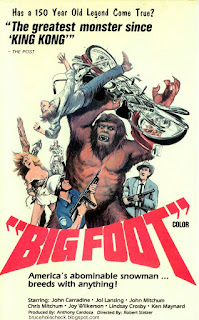 Jasper Hawks (John Carradine) and his feckless poltroon of a partner Elmer (John Mitchum, brother of Robert) tool the backwoods area of (let’s assume) the Pacific Northwest with their carload of tchotchkes and junk.  Meanwhile, Joi (Joi Lansing) is a pilot whose plane crashes in the same mountainous area where she is summarily captured by a Bigfoot.  Also meanwhile, motorcycle enthusiast Rick’s (Chris Mitchum, son of Robert) girlfriend Chris (the fulsomely bestowed, beauteous Judith Jordan) is likewise kidnapped by a Bigfoot.  Chris and Joi are held captive while everyone else does a lot of talking and walking in their search for them.

Robert F Slatzer’s Bigfoot does its damnedest to capitalize on the then-recently released Patterson-Gimlin footage of a Bigfoot sloping around Bluff Creek in Northern California.  Admittedly, the country had gone Bigfoot Crazy, and the beast (and regional variations thereof) swiftly became as much a pop culture icon as it was a figure of myth and speculation (this carries through to today, though in far more cynical fashion).  The first thing that struck me while watching this film was how much it reminded me of 1972’s The Curse of Bigfoot.  The resemblance is not so much in narrative content aside from the subject matter.  While I haven’t seen Curse probably since I was a kid, I clearly recall three things about it.  One, its finale (monster movie endings back then were straightforward).  Two, the monster was discovered wrapped like a mummy in a Native American burial mound.  Three, the monster makeup looked like a giant meatball that someone had dropped into a pile of dog hair and rolled around for a bit, then slapped eyes and fangs on it (and it had a habit of walking directly at the camera as a sort of transitional device).

Bigfoot shares two of these traits, specifically.  First, the monster makeup is horrible (though, in fairness, better than that in Curse), consisting of an immobile rubber mask and an ill-fitting fur suit.  The kid Bigfoot simply has some black stage makeup around his eyes and nose.  It’s almost sad, really, these yearnings for more Pakuni-esque makeup effects that this thing evokes.  Second, is the creature’s ties to Native American culture and its own tribal structure.  The characters come upon what they take to be an Indian burial ground, but they find a dead Bigfoot in a shallow grave.  Later, a Native American woman, upon hearing of the monster, utters the word “Sasquatch,” thus giving the film a bit of cultural diversity (no, not really).  The Bigfeet are dying off, the same as the Native American tribes had been for a long, long time but had somehow only around this era really become a topic of discussion in pop culture and media in general.  Like the Stick Indians (the more maladjusted version of the Bigfoot legend in Native American mythology), these Bigfeet steal women in order to breed with them.  In essence, they play the role of savages that Native Americans occupied in many a Western.  Of course, all of this takes a back seat to the rip-roaring excitement of walking and talking or getting the latest on Sheriff Cyrus’ (James Craig) love life with Nellie (Dorothy Keller) down at the local store.

Likewise, the film calls back hard to 1933’s seminal King Kong as well as 1740’s Beauty and the Beast (to which Kong also calls back).  In the opening credits, the creature is billed as “The Eighth Wonder of the World,” just like Kong.  After the film’s climax, Jasper laments that “It was Beauty killed the Beast.”  This wouldn’t be so egregious if it weren’t so wrongheaded.  Certainly, comparisons can be made between Jasper and Carl Denham, but the Carradine character is portrayed as avaricious and opportunistic to an almost villainous degree (plus, he’s really mean to Elmer).  Denham, at least as played by Robert Armstrong, had a fatherly, caretaking connection to Ann Darrow, motivating his sometimes-selfless acts in the efforts to rescue her.  Yes, he could be myopic in his lust for fame and fortune, but he wasn’t a total jerk.

What’s intriguing in this movie is the idea of bestiality and sex in general which it puts at the forefront.  Joi and Chris are being held specifically to have sex with the male Bigfoot and carry on its bloodline (Joi somehow intuits this as if she were Jane Goodall).  Further than this, the two actresses’ pulchritude is prominently on display throughout.  By 1969, depictions of sex on screen had become much more graphic, yet Slatzer and company never go the extra mile into pure exploitation.  It feels as though they wanted to have just enough salacious teasing for the teenagers in the audience (which also explains the “biker” angle, and yes, that word should be in quotes with regard to this film) while also being chaste enough that parents could take their families to see it.  Like the beasts in the movie, the audience is allowed to get fired up about the possibilities available for sex in the film but will ultimately be denied the experience, even vicariously.  Add to this the fact that the Bigfeet have no discernible personalities.  They are pure animals, acting on vicious instinct, and this robs the film of any empathy we may have about their plight.  Unlike Kong or the Beast, who formed connections with their captives and made us care about the deep emotions that undo them, the Bigfeet are the proverbial pack of rabid dogs in need of putting down.  But, then, to expect more from this movie is to not understand it.

Slatzer varies scenes shot on location with scenes shot on stage sets.  The country store is perhaps the best lit (in a fake sense) one of its kind ever put on screen.  These staged scenes serve to give the movie the feeling of something made for television.  One can understand this, as indoor sets are far easier to control from a technical perspective, but their insertion here undermines (or augments, depending on your point of view) any of the low budget charm this film could have had.  It’s too sterile, too unnatural.  I can guess why the filmmakers chose to shoot so much filler of people ambling through forests or motorcycling through forests or chatting in forests.  It’s cheap and easy.  But I would surmise that most people would want to see this thing for a little bit of skin (a very little bit) and some Bigfoot action.  Watching actors (even the great Carradine) spout variations on the same theme over and over again with the occasional glimpse of what you’re anticipating feels more like a carny cheat (and maybe Slatzer worked in carnivals, I don’t know) than the buildup and payoff that an audience would actually want.  At least the Patterson-Gimlin footage got it right.  It’s roughly two minutes of what people desire: to have their sense of awe and wonder stoked.  Bigfoot is the equivalent of roughly ninety minutes of moving furniture, and who desires that?

MVT:  The idea isn’t bad.  It just never lives up to the come-on of its advertising.

Make or Break:  The extended scene of Cyrus and Nellie discussing the local goings-on in their neck of the woods about which no viewer in their right mind would give even the slightest shit.