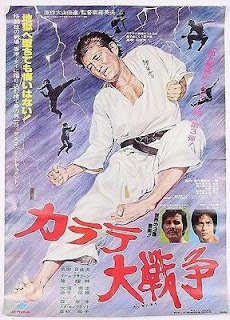 Tatsuya (Hisao Maki) used to be the top Karate-ist in Japan, but a stint in prison for murder sent him into exile.  When former sensei Tetsugen is offered the opportunity to prove the worth of Japanese Karate in Hong Kong and Thailand, his former student takes up the mission.

Hideo Nanbu’s Karate Wars (aka Karate Daisenso aka Karate Great War) features Maki as the most stoic martial artist in the history of cinema.  Nothing surprises the man, and he is forthright in his undertaking.  One has to believe that this approach comes, at least in part, from Maki the person.  Before his death in 2012, Maki was known for three things, his manga work (he was the creator of WARU and co-writer of the Futari no Joe anime, amongst other titles), his devotion to Karate (he opened his own dojo), and the rumors that he was a yakuza.  Two of these things can be definitively proven, but the third seems to influence this film most of all.  Tatsuya betrays no emotion.  He is there not just to beat the champions in the other countries but to kill them.  He swaggers with every step he takes, and the vast majority of his reactions to danger is an icy sneer.  This plays into the film’s concept of honor (something which, some would say, yakuza are only tangentially concerned with, but which is intrinsic to Japanese culture).  Tatsuya went into hiding because he had lost face in the eyes of the Karate world.  He was no longer worthy of being public about his artform.  It doesn’t matter that the murder he committed was not only accidental (and against a luchador, no less) but also was done out of love for his sensei’s daughter Reiko (Yoko Natsuki) and his urge to protect her (that Tatsuya wants to kill his adversaries in foreign lands is antithetical to the whole reason he left the martial arts world in the first place, but never mind).  Tetsugen falls for the line of the Karate Association, as headed by bent politician Soma (Nobuo Kaneko), that they want to claim honor for Karate outside of Japan, but he’s not so gormless as to not be suspicious.

In Hong Kong and Thailand, the opponents that Tetsuya faces do so out of honor, though they are not necessarily honorable people.  Chinese Kung Fu master White Dragon (Yao Lin Chen) knows that Tatsuya must be defeated in order to save face and his own Kung Fu school.  Yet, he doesn’t want to confront the Karate man himself.  He sends lackies like his wife Chin (who does a great disco/Kung Fu floor show in a Japanese club) and an assortment of Kung Fu goons to surprise attack Tatsuya at every turn.  He meets Tatsuya in bars and chats with him as if he were sympathetic.  It’s only when White Dragon’s legacy is directly threatened that he finally challenges Tatsuya to mortal combat.  In Thailand, Tatsuya is jumped again at several points, but their current Thai Boxing champion doesn’t command people to do so.  They attack because Tatsuya is a direct threat to the honor of Thai Boxing.  The former Thai champ, King Cobra (Darm Dasakorn), has fallen on hard times.  Like Tatsuya, he has recently been released from prison for an accidental murder.  Unlike Tatsuya, King Cobra has become a layabout and a drunk.  He sponges off his girlfriend and refuses to get a job.  Only when he sees that a Karate master defeated the Thai Boxing champ does King Cobra decide to contest Tatsuya and regain honor for his country.  It’s this same sense of honor and the ineffable drive that it sparks inside the martial arts masters that proves their undoing.  They cannot and will not back down.  Ever.  The pleas of their loved ones mean nothing in the face of possible dishonor.  Honor requires not only victory but also the death of an opponent.  On the one hand, the sense of honor in Karate Wars is virtuous, but, on the other hand, it’s also ultimately destructive.

Likewise, the film is nationalistic.  The plot is sparked by the Japanese characters’ sense of superiority as represented by Karate.  They want to show the world that Karate is the best and expand its influence outside of Japan.  Soma even states that Karate’s triumphs will appeal to the Japanese people’s sense of nationalism.  When Tatsuya leaves Japan, he becomes a stranger in a strange land, so to speak, though he behaves exactly the same as he did in his home country (i.e. like he owns the place).  All of the non-Japanese characters are prejudiced against the Japanese in general (the use of the pejorative “Jap” is ubiquitous in their dialogue) and Tatsuya in particular.  Though he is befriended by a Thai man who becomes his guide and translator, this man also becomes an outcast due to their relationship.  When he lived in Japan, he was similarly ostracized for his ethnicity, something about which Tatsuya does not give one shit, and he would likely eschew this guy if he didn’t need him.  Tatsuya is even kicked out of his hotel for no reason other than his presence in Thailand and what that means as a menace to the Thai identity.  What’s interesting in the film is that Tatsuya is similarly nationalistic, and this, in combination with his slavish devotion to honor, is his fatal flaw.  The two characters who care the least about any nationalistic ideals are Tetsugen and his daughter Reiko.  Instead, they are motivated by love; Tetsugen’s love of Karate and Reiko’s (inexplicable) love of Tatsuya.  Because their love is unselfish it surpasses the self-absorbed nationalism that motivates all of the other characters.

Nanbu’s film is simple in its story and repetitive in its structure.  The characters outside of the three main fighters are nigh-inconsequential except for illustrating the self-destructiveness of these men.  The plan of Soma’s cabal never develops beyond being a motive to get Tatsuya back into Karate-ing.  Where Karate Wars excels is in the subtext of its story and in the style Nanbu brings to the table.  At various moments, the picture fades to black and white or becomes solarized.  The sound drops out except for the natural noise of the environment.  Nanbu isolates the minds of the fighters in these ways, giving the audience an idea of the focus and viewpoint of these martial devotees.  The director also makes extensive use of slow motion, long takes, and wide shots in the fight scenes.  The fight choreography appears to be, by and large, genuine, not stylized to a superhuman degree but idealized for what a human is capable of through the martial arts.  So, while the story is mechanical, the film satisfies as a showcase for Karate and a study of the pros and cons of honor.

MVT:  Maki, Dasakorn, and Chen all impress with their skills.

Make or Break:  The finale is a great summation of the film’s thematic elements and an enjoyable rumble.