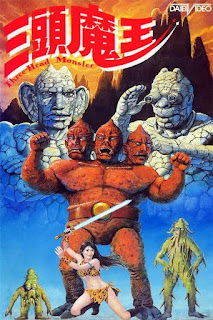 There’s something about things with two heads that fascinates us.  When we see genuine Siamese twins, our heads fill with thoughts about how they live their lives.  How do they get around if one side wants to go a different way than the other?  What is that total lack of privacy like, to be forever physically linked with another person?  What do their arguments go like?  Sure, we’re also entranced by the biology of it, the uniqueness (call it freakishness, if you like).  But more than that is the fantasy of a life so alien to our own.  In cinema, things with two heads are almost universally maleficent.  There’s The Incredible Two-Headed Transplant, The Thing with Two Heads, Dioskilos/Orthrus from Clash of the Titans (the good version), The Manster, that purple, beardy Muppet from Sesame Street, and so on (yes, that last one is actually fairly good-natured).  They are typically portrayed as two sides of the same coin, at conflict with one another, each struggling to be the dominant personality and maintain control.  They are, in effect, the dual nature of man.  Now, bring one additional head into the equation, and the dynamic changes.  King Ghidorah is likely the first creature most people think of when they think of three-headed monsters.  All of his noggins work in concert toward a common goal, because Ghidorah, the body, is the one who needs to be sated.  By contrast, in Monty Python and the Holy Grail, the three-headed knight is indecisive and bitchy, immobile and ineffectual.  It’s no longer about grappling with the twin sides of a man’s soul but about the ability or inability to act at all.  It’s an answer to the old saw about “too many cooks spoiling the broth.”  So, the Three-Head Demon King in Wang Chu-Chin’s Three-Head Monster (aka San Tou Mo Wang aka Ginseng King) knows exactly what he wants, and his heads act in concert toward that goal.  With this in mind, when somebody says that two heads are better than one, feel free to disagree.  But three heads?  Hoo, boy!

Hsiaoming is off collecting herbs for his ailing mother when he is bitten by a cobra but is saved by the affable (if creepy-looking) 1000 Year Ginseng King.  Turns out, the Ginseng King is also in need of some saving when Princess Hsiaoli (Cynthia Khan) captures him for the titular beastie to devour and become immortal.  Hsiaoming quests it out, both for his new, Man-Thing-ian pal as well as for the sake of his mother.

Three-Head Monster is a fantasy for children, but, like many filmic fantasies for the pre-adolescent/adolescent set produced in the Seventies and Eighties (and especially when hailing from places like Taiwan), there is enough gruesomeness to make the Brothers Grimm quite happy indeed.  For example, a Nazi zombie (possibly a Jiangshi) terrorizes the young boy and his mother, destroying their hut in the process.  He pauses at multiple times to Sieg Heil, and he is stopped in his tracks by the swastika on a young monk’s satchel (never mind that it’s facing the wrong way).  Every supernatural character, with the exception of Hsiaoli and Grampa Earthgod, is hideous, their skin mottled and peeling off.  There are more bloody squibs and explosive body impacts than one might expect in such a movie.  But this is also part of the appeal to kids (and, let’s be clear, to many adults).  It has the simultaneous sense of wonder and imagination that captivates a young person’s mind and the violence which not only ups the ante but also satisfies as something which is partially taboo to stare at and partially exactly how the scenario might play out in a kid’s head (death, not imprisonment or banishment, is the ultimate fate of bad guys).

Like fairy tales and parables, the film also contains a valuable lesson, and it is that greed is bad, and self-sacrifice is good.  The Demon King is concerned only for himself and the prospect of his own immortality.  He imprisoned his own wife (who looks like a grade school play’s version of the Wicked Witch of the West) because she stood in his way.  The Ginseng King is kindly and helpful to people in need.  He heals Hsiaoming’s snake bite.  He gives the lad a “whisker” to heal his mother (this backfires in a big way when the Nazi zombie drinks the broth with the root in it; the Nazi zombie also being a symbol of greediness in both his worldly and otherworldly natures).  He helps Hsiaoli escape from the Demon King’s minions, unaware that he’s actually falling into a trap.  He will even sacrifice himself to save them all, if that’s what it takes.  Grampa Earthgod starts off greedy, thinking only of his own safety, reluctant to admit what he is or to help Hsiaoming on his journey until he’s shown that this is his purpose.  Hsiaoli also skirts this line, at first seeking the Ginseng King with all her resources.  Later, she sides with Hsiaoming and the forces of good, because her genuine motivation lies in helping her mother, not in the betterment of her father.  Therefore, the more we can do for others while ignoring our own needs, the better we are as people.

Like an after school special, Three-Head Monster is simplistic and obvious, almost to the point of pandering.  It is also repetitive, not in the sense of the overcoming of similar obstacles and circumstances but in the facility with which the protagonists’ problems are dispatched.  “We need to convince Magic Eyes and Magic Ears to help us.”  “Okay, let’s ask them, but they probably won’t do it.”  “Hey, guys, would you help us out?”  “Sure.”  When the characters need to find something or escape from somewhere, the solution is always right at hand and/or achieved with a minimum of fuss.  It takes any tension out of the story.  Yes, we know from the outset that the heroes will prevail, but without any real resistance or effort, it deprives their victories of resonance.  The action scenes are edited with jump cuts and shot with enough shakycam to make modern action filmmakers drool.  I can at least rationalize in my own mind the jump cuts as playing to the supernatural nature of the characters and as some vain attempt to display the speed at which these characters move.  The rest of it is simply messy filmmaking.  The film also ends abruptly, engendering shrugs of disinterest rather than reinforcing the sense of wonder the filmmakers likely set out to capture.  Ultimately, the audience is left with the question, “Why?” and the offhanded reply, “Eh, why not?”

MVT:  The ambition of the filmmakers.

Make or Break:  The Nazi zombie scene comes out of the blue and threatens to derail the whole affair with its conspicuousness.