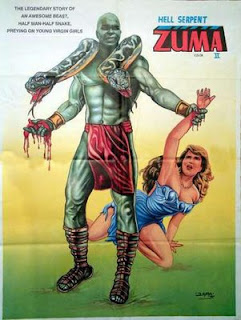 Just recently, the ruins of a temple were discovered at the El Paraíso site in Peru, and they are estimated to be about five thousand years old.  This is no real great shakes, since (to my knowledge) Peru is rife with ancient ruins (no offense to any Peruvians who may be reading).  What this story does do, however, is brings up the idea that archaeology is still important in this modern world.  In an era when we have (or think we have) all this knowledge at the touch of a button (and we won’t get into a discussion about the unreliability of information on the internet this time around), there are still people kneeling under the hot sun, slowly scraping bits of dirt from long-forgotten relics of dead civilizations in the pursuit of some insight into how we became what we are.

Real archaeologists toil away at tasks which are almost the equivalent of trying to empty the ocean with a teaspoon, yet in films, this tedious, nigh-thankless profession is romanticized to an insane degree.  When cinematic relic-diggers aren’t raiding lost arks or going on wild crusades, they are excavating ancient monsters that revive, and only their quick wits and iron wherewithal can return these beasties to their graves.  Naturally, we can argue that just about every profession can be (and probably has been) glamorized on film to some degree, and I’m sure that, while real archaeologists love the attention films like Indiana Jones And The Temple Of Doom bring to their avocation, they’re also sick to death of having to answer questions from goofs in regards to the existence and “actual” properties of quasi-mystical objects.  Then again, I’m not an archaeologist, so maybe they’re not.

Phillip (Mark Gil) and Isabel (Dang Cecilio) are archaeologists who have just uncovered a remarkably pristine temple in the side of a mountain.  As the men peregrinate around, Isabel is drawn to a secret room, inside which is a large sarcophagus.  As she paces closer to the tomb, a pair of large rubber snakes appear from inside, scaring the bejeezus out of the poor lady.  When the men investigate, however, the tomb is empty.  Meanwhile, a bunch of dead bodies are found outside the site with lethal amounts of venom in them.  Soon thereafter, the eponymous Zuma (Max Laurel, who looks vaguely like Milton Reid of Dr. Phibes Rises Again fame) stalks the streets of the Philippines, hungering for the hearts of virgin women.

It would seem that I have inadvertently been on a bit of a comic book adaptation jag as of late, because Jun Raquiza’s Zuma (aka Jim Fernandez’s Zuma) is yet another one.  One thing which I have seen far more of from countries other than the United States is a predilection for comic book stories centering on characters that could just as easily be called villains as anti-heroes.  This is no exception.  Zuma is the son of the Mayan god Kukulkan, the feathered serpent, and his whole schtick is violating and killing female virgins.  Early on in the film, he rapes Galela (Raquel Montesa) while her boyfriend Joseph (Mark Joseph) is bitten to death by cobras.  Galela then becomes the thrall of Zuma (sort of like a distaff Renfield), trapping women for him to kill.  Zuma resembles a Filipino version of the Incredible Hulk with a double-headed snake growing out of the back of his neck.  But unlike the Hulk, who would typically do some good intentionally or not, Zuma’s purpose is to rack up virgin corpses to “fulfill the rituals of his faith,” though to what end the audience is never privy.  We would expect some attempt to humanize Zuma (even Diabolik had Eva Kant), but he’s little more than animated brute force, although I would be hesitant to call him an elemental force.  Even after Zuma’s daughter Galema (Snooky Serna, who, God help me, actually looks a little bit like Snooki Polizzi) turns up, Zuma would kill her as soon as have her live with him.  Like Rawhead Rex and other reborn Elder Gods, Zuma’s needs are not human, ergo his actions are never other than inhumane.

Sex plays a large part in the film, yet its treatment is quasi-puritanical.  The characters that have sex in the film are never shown naked having sex.  Nevertheless, the women who become Zuma’s prey often have their tops ripped off for a cheap tit thrill.  It’s incongruous, but interesting to note that nudity is only depicted in regards to violent acts against women.  The image of a snake is phallocentric to begin with, and the fact that Zuma has two rather large snake heads hanging off his shoulders is telling.  What’s more, his snakes are usually alert and pointing straight out, an indication of tumescence and the faint notion that Zuma’s actions are guided by his loins (and being the scion of a “War Serpent” only adds to the idea of violence making up for sexual inadequacies).  Galema also has snakes like her father (cleverly woven into her pigtails), but she has trouble controlling them.  Her life has been dictated by the influence of these phallic appendages, and they have kept her docile up until her nineteenth birthday.  She is also a virgin, but it’s through the love of Morgan the young soldier (Rey Abellana) that she will become their master.  So, even in its strongest female character, the film is controlled by male influences and all that that entails.

But for as much insanity as Raquiza and company put onscreen, Zuma is a bit of a slog from a pacing standpoint.  At over two hours and ten minutes long, there is a ton of fat that could have (and should have) been trimmed.  Whole sequences pass by where characters literally do absolutely nothing and then suddenly act.  My best guess is that this is the result of its comic book origins, because the plot feels much less like one story than it does a stringing together of multiple episodes with one set of credits on either end.  As soon as any part of a story (I won’t say “the” story, due to the variegated nature at play here) gets interesting, the film’s gears are swiftly shifted (you can almost hear the filmmakers grindin’ ‘em ‘til they’re findin’ ‘em), and the audience is back at square one.  All well and good, but with each shift, there is a new set-up and build up, and it makes the going difficult.  Add to all of this, a deus ex machina that makes practically everything that came before irrelevant, and you have one hot mess of a film.  All of that said, I still found myself liking this movie, largely because it is so much larger than life and so incomprehensible.  It’s like examining a car crash photo and not quite being able to make out what exactly you’re looking at.  But you just can’t stop yourself from staring, can you?

MVT:  As Forrest Gump might say, “Zuma is as Zuma does.”  Let’s face it; if Zuma wasn’t as visually bizarre as he is, it would be tough justifying watching all two-plus hours of this film.  A giant green man, in a shiny red loincloth, with giant snakes on his shoulders?  Color me intrigued.

Make Or Break:  The Make is the scene where Zuma has his way with Galela.  It’s outlandish on its face, but it also manages to be sleazy and creepy, and it depicts the sort of menace Zuma could have been throughout the film but never fully is.