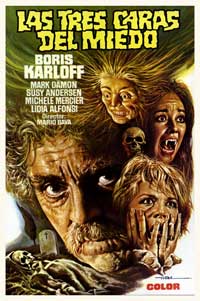 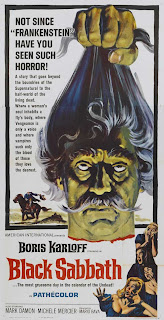 Arrow Films release of Mario Bava's I tre volti della paura  also features the American International Pictures cut of the film,but for the purposes of this review,it's the original cut i'm discussing.

I've only seen a handful of Bava's movies,but this is the one that i've always wanted to see - the image of Boris Karloff holding a severed head is one that's stuck with me for many years ever since i saw that ghastly photo in a book.....

I tre volti della paura begins with the story,The Telephone, which has been viewed by some as the weakest section of the film,and granted,it is a little predictable in terms of storytelling - but that's probably because there have been many films since which have covered the same ground. I can't fault Bava's direction though which manages to evoke an escalating sense of fear and paranoia as a call girl who is plagued by threatening phone calls. The resolution may be hurried,but it's still a nervewracking tale.

The next story,The Wurdalak,is perhaps the best known tale in the film. Set in 19th century Russia,it tells of a family awaiting the return of their father (Boris Karloff|) who had gone in pursuit of the dreaded Wurdalak - a living corpse which feeds on the blood of those it loves the most. When their father returns,they worst fears may have come true - that he may have become a Wurdalak,but can they bring themselves to destroy him before he feeds on them.....?

The Wurdalak is perhaps my favourite section of the film. It's incredibly atmospheric and creepy,bolstered by a chilling performance courtesy of Boris Karloff - the scene in which he rides off with his grandchild is one of the most cruel images i've seen in a film for a very long time....a family ultimately undone by their love for one another.

The final tale,The Drop Of Water, is Bava at his stylish best. Set in Victorian England,this story resolves around a nurse who unwisely steals a ring from the corpse of an elderly medium......and soon after finds herself tormented by a fly and the constant,neverending sound of the drop of water....

If it wasn't for The Wurdalak,The Drop Of Water would have been my favourite story. Bava's use of sound,light and shadow is impeccable.....what proves to be hell for the nurse was a sheer delight for this viewer as she pays a heavy price for stealing from the dead,and i'd be lying if i said i didn't jump a few times as Bava's cautionary tale unravelled to its more than satisfying conclusion.

So there you have it - three stories of madness,horror and death,each one different in their own way but all linked by the unmistakable style of Mario Bava. I can't recommend Arrow Films release highly enough and i urge all fans of cinema to seek this title out. 9/10