ELVIS IN MAY: STAY AWAY JOE 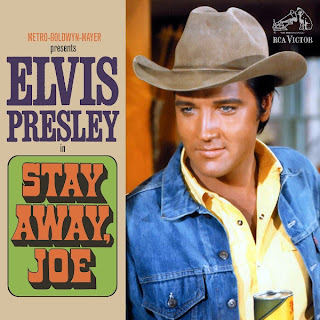 Encore is running Elvis movies throughout the month, on repeat mode, one Elvis movie a day for the whole month. One cant fault Encore's choice of titles: among others, there's KING CREOLE, JAILHOUSE ROCK, BLUE HAWAII, SPEEDWAY, SPINOUT and CHANGE OF HABIT (OK, maybe fault that last one).  These are all great examples of the iconographic nature of Elvis movies. Yes, thats right: an Elvis movie is a category unto itself. Hitchcock movies are Hitchcockian; Kubrick movies are Kubrickian; an Elvis movie is "An Elvis Movie". Encore's setlist has 'em all: Elvis: young & black-and-white raw; Elvis: in Hawaii; Elvis: in racing cars; Elvis: starring opposite Mary Taylor Moore playing a nun.

I haven't seen these Elvis movies in a while although I could probably write reviews just from my memories. I will be watching these titles this month (a few already await on the DVR) so i will hold off writing reviews of each of these title until I actually watch 'em.

What else is new in Elvis World lately that I can talk about?

Well, the FTD label (which is the official, Graceland-sanctioned "bootleg" label that is dedicated to releasing outtakes from Elvis recording sessions as well as soundboard recordings of concerts) has just released a special edition CD of the soundtrack to STAY AWAY JOE.  This has to be considered something of a feat given that the movie only contained four (!) songs. Anyway, I am actually hot to get this if only because it seems like a looooong time since I heard any new Elvis at all, much less some new Elvis that really gave me that old tingle, or any tingle, if you must know.  So it is out of this desperation, this starvation, that I am kinda salivating at the track listing.

But wait, the movie...a few words. Not many. I cant say too much about, I've never seen it, I've never ever really wanted to see it either. Elvis as a Native American(!). For the second time in his movie career(!!).  Oy.

Back in the day of only seven television channels (yes, just seven, and some of them didnt come in too clearly, either), I dont think STAY AWAY JOE played very often. I dont recall it being part of the regular line-up of The 4:30 Movie when they showed an Elvis movie every day for a week and I rushed home from school to see them. That's when they showed DOUBLE TROUBLE, SPINOUT, SPEEDWAY, GIRL HAPPY, HARUM SCARUM. The good ones. Yes, you heard me. Shut Up, yes, I like HARUM SCARUM. So, not only that, I dont recall ever seeing STAY AWAY JOE on, say, The Saturday Afternoon Movie, The Saturday Night Movie, The Sunday Afternoon Movie or any other day-of-the-week-movie.  They showed movies all the time back then. But STAY AWAY JOE rarely showed up. So I didnt see it and I didnt miss it.

Even today, there are other points of interest that might make me take just a quick look at it: the presence of LQ Jones and Burgess Meredith and even Joe Esposito, an Elvis flunky who later became Elvis' closest consigliere when things turned dark and the Memphis Mafia went from Hollywood Romp to Coppola Shakespeare, and the presence of Charlie Hodge, an Elvis flunky who later became Elvis' irritating stage foil when Elvis let this fool on-stage to sing harmony during the concert years (the latter two are just cameos, credited as "Uncredited" for the former and "(Uncredited) Guitar Player" for the latter, but I like playing those spot-the-who games when watching movies). I do remain forever curious as how they fit the song "Dominic" (about more in a minute) into the story and what's going on when he sings it (about more in a minute). But no, I dont really want to see it. No burning desire to see it. Elvis looks great, amazingly great, like even-I'd-fuck-him-maybe great, he is growing into his lean, mean 1968 Comeback look after years of carrying Hollywood flab. But, no. Elvis as a Native American(!). For the second time in his movie career(!!).  Oy.

I do like the songs tho. I dont wanna see the movie. But I like the songs. They are perfect examples of an Elvis movie song, for good and for bad. They dont rise above that label (like the way a lot of the songs in BLUE HAWAII and JAILHOUSE ROCK rise above the Elvis-movie-song label, and transcend into honest-to-goodness bona fide memorable songs). There's more of those kinds of Elvis movie songs (honest-to-goodness bona fide memorable songs) than most people might think. But thats a discussion for another time. But the songs of STAY AWAY JOE are Elvis movie songs, no more, no less. I like 'em.

Apparently, there are songs that were recorded for the movie but werent used in the actual movie (and, in the case of "Dominic" never released until much later, after Elvis' death). But, never having seen the movie, I cant tell you which songs actually made the cut. But all of these songs appear on the new CD so lets discuss 'em.

"Stay Away, Joe" - so, full confession: I am partial to this song, a soft spot: it was the opening track of one of my first Elvis LPs (the "Lets Be Friends" LP on the budget label Camden, purchased at a WoolWorths for maybe $1.99 in the early 1970s and which remains my favorite of the Camden LPs). The song is a sprightly hoedown number that is rather catchy. It always made my cassette tape mixes, before and after the advent of Sony walkmans.

"All I Needed Was the Rain"- OK, again, I am partial to this because this song appeared on another of my first Elvis LPs (the "Singer Presents Elvis Sings Flaming Star" LP, although I didnt have the original Singer release but the Camden reissue that, yes, I purchased at a WoolWorths for maybe $1.99 in the early 1970s).

[The "Elvis - C'mon Everybody" was my first ever Elvis LP purchase (well, my mom purchased it, of course). Yes, purchased at a WoolWorths for maybe $1.99 in the early 1970s. After that, the chronology becomes fuzzy, which LP purchased in which order, but they were all Camdens from the cut-out bins. My first bona-fide RCA label LP, the first purchased-at-a-record-store-for-full-price LP (well, my mom purchased it, of course) was "Raised on Rock". Stop here, we can pick this topic up in a later post.]

Anyway. "All I Needed Was the Rain". A really great song. A great Elvis movie song. Comes close to rising above and transcending but its a bit too short. Still. Love it. An after-hours, weary-country-blues number with a spare country blues acoustic guitar and harmonica. When I have the time and I sit and try to learn how to play my own (beginners) acoustic guitar, this song is the one I try to work on playing.

"Dominic" - The infamous "Dominic". Now, of course, this song is not defensible in any way. Its a prime example of the bad Elvis movie song, the punch line people have in mind when they ridicule an Elvis movie.  Elvis. Singing. A song that is sung to a bull (!) who is apparently not interested in shagging any female bulls(!!). You can see why I remain curious as to how, exactly, the script leads up to Elvis just throwing out his hands, swivelin' his hips and bursting into this song. My curiosity is intensified further by the fact that Wikipedia points out that, in the movie, Elvis sings the song to two women and there is no bull in the scene. (No, I still wont see the movie). But, Ok. Still. I like it. Its silly, I know. Maybe its not even music as the term "music" is understood by the intelligentsia. But I like it. I even put it on the mix I play for my 5-year old and my 2-year old, when I put each of them to bed.

"U.S. Male" - Macho braggadocio from The King. What turns this into something great (that word again!) is the inspired guitar picking of Jerry Reed that drives the song. The words may be a poor caricature of someone claiming to be a bad ass but Elvis puts on his game-face and attacks it and Reed's guitar turns this into a countryboy's call to arms.

"Too Much Monkey Business" - ...and while we are on the subject of Elvis' game-face and Reed's guitar picking, it appears again on this (incredible, I think) cover of a Chuck Berry song. Yes, this too appeared on that "Singer Presents Elvis Sings Flaming Star" LP but thats not the reason I love this. Its a quality song and features an engaged Elvis giving this one his all. I sincerely doubt this had any connection to STAY AWAY JOE, I doubt it was recorded for, but not included in, STAY AWAY JOE, but FTD has chosen to include this anyway.  They are padding this CD a little bit but whatever.

"Going Home" - following on from meh, here's another one. Undistinguished. Singing about the great outdoors again. Meh.

So, now, what is the FTD CD offering, and why do I care.

Two words for ya:

Here are some more words for ya:

But what do I want to hear most of all? Yes, you better believe it. The outtakes of "Dominic". I really do. This could be really fun. Studio sessions where Elvis is trying to wrap his tongue around the stupidest songs are often hilarious.  One need only think back to the outtakes of "A Dog's Life" and "Datin" from the recording sessions for the PARADISE HAWAIIAN STYLE soundtrack? or the outtakes for "Beach Shack" from the SPINOUT sessions?

On a more serious level, the outtakes for "Too Much Monkey Business" also promise gold. If. If these particular takes havent been released already. I know we have heard at least take 9, I think, on an earlier FTD movie outtake collection. Its kickin too, esp when Elvis does an incredible bit of patented Elvis business with one of the lyrics. I love this take even more than the released (master) version. I am not sure how many of the other takes collected on this new CD may have been previously released so my fingers are crossed we have some new unheard material.

I am incredulous that there are no outtakes of "All I Needed Was the Rain". Like, not at all. Not one. That is simply an unconscionable omission by FTD.

The sessions for "U.S. Male" have already been extensively bootlegged so I dont expect there will be anything new here.

The CD track listing doesnt specify if the outtakes of "Stay Away" are of the slow version or the fast version. But I think "Stay Away" has also been pretty much covered by the bootleggers (if not by FTD themselves) already as has "Stay Away Joe" and "Going Home".

So, not a lot to look forward to, but the little bit that I am looking forward to could be gold.

Cant wait to pick it up.

But I still dont wanna see the movie.