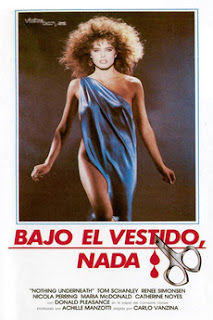 One of the more interesting things that the Giallo genre has going for it is its dalliances with the supernatural.  Many times, there will be a psychic or some spectrally focused aspect to the story, and these are often uncovered as being totally banal.  Just look at the opening to Dario Argento’s Profondo Rosso, where noted psychic Macha Meril foresees death as water slops out of her mouth, and a raven flies over the audience.  Or look at Emilio Miraglia’s The Night Evelyn Came Out of the Grave, where a dead woman makes appearances as characters are knocked off, one by one.  The thing of it is, yes, typically these elements are nothing more than red herrings, but sometimes they remain unexplained.  This shifts the atmosphere of a film, because the audience knows that the killer has to be a human while simultaneously harboring a tiny mote of doubt that maybe, just maybe, they’re not.  It positions a conflict between the rational and the fantastic, generating a level of tension in its uncertainty.  So, we have siblings Bob (Tom Schanley) and Jessica (Nicola Perring) in Carlo Vanzina’s Nothing Underneath (aka Sotto il Vestito Niente) who share a mild psychic connection.  When Jessica is assaulted in Milan, her brother physically reacts in Wyoming, like Dumas’ Corsican brothers.  But Vanzina cheats this aspect in order to give us a few Killer’s POV shots.  Why would Bob be able to see what the killer sees if his rapport is with his sister, unless his sister is the killer, which she couldn’t be since she’s being stalked by the killer, right?  It’s the kind of superfluous, sloppy construction that marks this film as a low rung on the Giallo ladder.

Anyway, Bob abandons his job as a park ranger to fly to Milan in search of his sister who went missing after his vision of her being menaced.  There, he meets a bunch of fashion models and teams up with Commissioner Danesi (Donald Pleasance) to get to the bottom of things.  Meanwhile, people are being stabbed with a very large pair of scissors (I guess at this point, they should just call them shears).

Bob is a dullard hero.  He has no real personality to speak of.  At the local general store, he gets all excited because his sister finally made the cover of a fashion magazine.  Sure, we might all get excited when a family member succeeds, but Bob takes it to another level of gee-whiz-ness.  He’s not so much a fish out of water as a fish who’s never seen the stuff before.  It’s as if his job out in the wilderness has left him completely oblivious to the civilized world.  Bob is intended as an everyman, an entry into the world of high fashion as an identifier for the audience.  Unfortunately, all he winds up being is a sort of gormless yokel.  This might not have stood out so egregiously if the audience didn’t already know more about the world (fashion and otherwise) than Bob does.  The movie gives no insight, makes no revelations, about fashion, models, or anything else.  Vanzina and company portray the models and their lifestyle exactly the way it’s expected to be.  The interesting thing, if it can be called interesting, is that the film is adapted from a novel by the pseudonymous Marco Parma (actually Paolo Pietroni, editor of Amica magazine; you can guess what the mag’s focus is), and, from what I’ve read about it, is far more complex and, probably, more satisfying than the film version.  The filmmakers appear to have stripped away any of the depth or commentary present in the book to fashion (pardon the pun) a standard-as-they-come mystery.  Bob is a reflection of this, as an underwhelming protagonist in every possible way.

The world of fashion in the film is possibly meant as a cynical analogy for the apathetic carnality of people in general and the “elite” in particular.  Scumbag diamond merchant George wants cocaine and sex, and he takes these things whenever he wants them.  Women are nothing but holes for him to fill.  Money is meaningless to him, since he has so much of it.  He draws models into his web with the promise of wealth or at least a passing brush with it.  They do what he wants because he can give them what they want, and the superficiality of it all is standard fare for stories about models.  Naturally, Jessica stands out as the one who resists George and his advances.  Certainly, she’ll do coke with him, but she won’t have sex with him, and this only brings out the even bigger asshole in George.  George is the price to be paid to breathe in the rarefied air of model-dom.  Resistance is met with retaliation and abandonment.  Further, when models start getting stabbed, it can be seen as a comeuppance for their shallow venality.  Their willingness, nay enthusiasm, to debase themselves for a glamorous lifestyle is unforgivable in the eyes of the film.  It’s a moral we see constantly in stories centering on this universe, and Nothing Underneath is no different.

I think that the title Nothing Underneath is appropriate.  There is nothing underneath this film’s surface that we haven’t seen before.  To be fair, the film is slick as all get out (kind of like a fashion magazine, no?), though I wouldn’t go so far as to call it stylish.  The characters are uninteresting, and even Pleasance’s presence is not enough to elevate this material.  The central mystery of the piece is blatantly obvious (that is to say, nonexistent), and the killer’s identity is evident from the second time we meet the person.  The only aspect that does remain outside the audience’s grasp until the end is the motivation, and while it is mildly intriguing, the filmmakers still don’t do anything to make it stand out (aside from a quick sexual tease, reminiscent of the film in total).  Vanzina and his cohorts took something that screams out for an overdose of Eighties excess and gave us vapid vacuousness.  Maybe this was intentional as commentary on the meaninglessness of lives spent looking fantastic.  But the end result is as shallow as the subject is skin deep.

MVT:  The women in the film are attractive enough, though some of their clothing choices are tragic.

Make or Break:  Following suit with the film’s two-dimensionality, I’ll go with any scene where we see a little female skin.