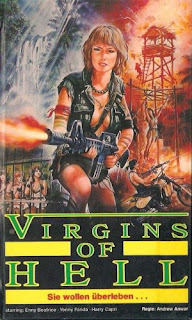 I’m just going to go ahead and admit something to you which you probably wouldn’t otherwise have guessed about me (maybe you would have, seeing as how the portrait I feel I’ve managed to paint of myself through these little, cinematic sojourns has been somewhat less than flattering).  I liked Information Society.  For those who don’t know, they are an electro-pop/synth-pop/etcetera group (from Minneapolis, which I would never have thought, personally) that formed in the Eighties (I have no idea if they’re still around).  They had one hit with their song What’s On Your Mind.  You may remember that one for its multiple sampling of Leonard Nimoy’s delivery of the line, “Pure energy” throughout the song.  I was so excited by this song, I wanted my hair done like singer Kurt Harland.  At the time, I kept my hair fairly short,  and if you’ve ever seen Harland’s mop, you know it is decidedly long and chaotic.  Well, I insisted to the lady who used to cut my hair that this was how I wanted my hair done, and I would brook no argument (yeah, I was a prick as a kid, too).  Being the extraordinarily good sport she was, she complied as best she could from the tiny reference photo on the cassette tape’s card stock foldout.  And I wound up with a very short, off-center Mohawk.  That lasted about three days, and then I decided to get my hair buzzed off yet again and stop fooling around with such lofty, follicular ideas (we’re not counting when I grew my hair out, since that was half a reaction to going bald and half laziness).  While this little venture wasn’t the worst thing I sank my claws into and clung to tenaciously, it sure as shit wasn’t the best, either.  But at the absolute minimum, I never wore any fashions that resembled something from Fred Flintstone’s wardrobe like the titular Virgins From Hell (aka Perawan Disarang Sindikat aka Maidens Revenge) of Ackyl Anwari’s film.  At least I don’t think I ever did.

A smoke-filled casino is busted up, some light genital mutilation ensues, and the movie gets underway.  Sheila (Enny Beatrice) and Karen (Yenny Farida), the Ann and Nancy Wilson of Indonesian girl bikers, have taken over an all-female gang in order to exact revenge.  Telling the girls her back story (and kicking off a flashback with, “It was a bright, sunny day…”), she details (we can only assume for about the tenth time) how Mr. Tiger (Dicky Zulkarnaen) liked their family’s house so much, he shot their parents to death and moved his illegal aphrodisiac operation into their unbelievably fortified and cavern-esque basement.  Describing more of the film would not only ruin the experience of seeing it for the first time, but you probably wouldn’t believe what I typed at any rate.

Let’s go over a bone I have to pick with this movie, or at least its title.  The female bikers are not virgins, or at the very least, the English-dubbed dialogue states that they’re not.  Sheila insists early on that, in order to infiltrate Tiger’s casino, she had to “become a common slut.”  We can only assume, then, that the other gang members had to do the same thing in order to accomplish their mission.  Later, two of the gang will turn against Sheila and the rest.  They become Tiger’s sex slaves and are regularly beaten and abused, but they never protest or make any attempt to escape or stop him.  Credit where it’s due, however, both Janet (another biker) and Sheila appear to castrate men trying to force themselves on  women, Janet with a knife, Sheila with a gun.  That the guard Janet cuts turns up minutes later, seemingly healed and ready for duty, is part of this film’s charm.  It would be nice to be able to say that the film carries the metaphor of chastity equaling power, but it really doesn’t.  If anything, it falls into a Rape-Revenge mode fairly early on, and even then, the women aren’t too strong without the help of men.

Contrast this with the treatment of men and their sexuality in the film.  Mr. Tiger’s big scheme is to create an aphrodisiac that appears to put women into paroxysms of ecstasy for an extended period of time (think Spanish Fly on crack).  Of course, the single reason why this drug would exist at all (aside from Tiger’s declaration that, “With a drug like this, I can take over the worldwide aphrodisiac market “) is so that men can prey on women sexually and try to mollify their consciences (not that people who would do something like this would likely have one in the first place), because they (the victims) were “in the mood” to begin with.  It’s power over women that the film not only focuses on but also seems to endorse, despite some of its more suffragist proclamations.

Mr. Tiger gives the term “sexual deviant” a bad name all by his lonesome.  He whips women, pulls their hair, drags them around, and he does it with a bug-eyed intensity that is truly startling.  This sense of sadism extends to the lesbian character of Dutch.  Her name alone is masculine, she is rough and tough like the men she serves and serves with, and she even has a tattoo of a scorpion on her face (I kept thinking of John Candy’s classic “Harry, The Guy With A Snake On His Face” skits from SCTV), further distancing herself physically from traditional feminine concepts of beauty.  Yet, Dutch also plays the part of another predatory male.  She comes upon the slumbering Karen and begins covering her in kisses.  When she gets to Karen’s thighs, though, she bites down and draws blood.  This hint of blood and cunnilingus intermingling conjures one of the film’s more skincrawling notions, but certainly not its wildest.

If much of what I’m describing sounds just a bit insane, that’s because it is, but it has to be seen to be believed.  Every inch of this film reaches for (and usually hits) new plateaus of craziness.  A woman is hung by her wrists and spun around between four posts encased in barbed wire.  Another woman is turned on a spit over a barbecue pit (later she turns up, like the castrated guard, healed).  A crocodile is wrestled and slain like Johnny Weissmuller on a bad day.  A snake is used to extract a bullet from a wound.  Nonetheless, the levels of absurdity in this movie, no matter how far gone they may seem, are taken entirely in stride by the characters.  Nothing fazes these characters.  Nothing.  Furthermore, there is no audience identification character through whose eyes the viewers have a proxy to help them acclimatize.

It’s this banality of the preposterous that makes Virgins From Hell and many Indonesian genre pictures like it so incredibly fascinating.  Unlike with, say, a Terry Gilliam film, where there is often this same sort of facile acceptance of the outré (by the film, if not necessarily by its characters), the difference lies in the productions themselves.  Indonesian films don’t have the budgets to compete with the slickness of a Gilliam or Cronenberg film, so they have to rely solely on their imaginations which are (to their credit I would argue) not served by their executions.  It’s the audacity in putting everything on screen and then essentially shrugging at the audience as if it’s not their job to interpret any of this that makes them such unique cinematic experiences.  You may see the wires behind an Indonesian film’s tricks, but what they’re holding up will likely blow your mind.

MVT:  It’s the insanity.  It has to be.  If this were a standard Action/Sexploitation film (with not one nude scene, I might add), there would be nothing all that remarkable about it.  Its excessiveness is its allure, but it somehow doesn’t truly cross the line of distastefulness (though it’s certainly not a film made in good taste).

Make Or Break:  During a big battle between the Virgins and Tiger’s army, there is a single instance which stands out above the rest for me.  One of the women rides her motorcycle off a cliff, diving for the house’s front door.  As the bike wobbles on painfully visible wires toward its destination, a villain gets off a shot that causes the bike and its rider to explode.  It loses its impact just reading about it, but trust me; your jaw will hit the floor, and at that moment, you’ll be all in.