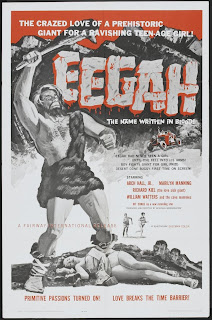 "To alcohol! The cause of... and solution to... all of life's problems." Homer Simpson.

Hello, I am Brett Ridley and I am addicted to collecting public domain dvd collections. This is why I am reviewing Eegah and sharing the pain of this film. The too long; can't be bothered to read version of this review is watch the Mystery Science Theater 3000 episode where they make fun of this movie.

The movie opens on the whitest town in California were Roxie (played by Marilyn Manning) leaves the all night women's clothes store and goes to visit Tom (played by Arch Hall Jr.) at the gas station where he works. There is an exposition dump from Tom about Roxie and her father Robert (played by Arch Hall Sr.).

Roxie takes off for the country club and nearly runs over the title character Eegah (played by Richard Kiel). Instead of driving off and ending this nightmare movie, Roxie decides to stop get a better look at Eegah and then faint. She is save from being kidnapped by Tom driving up and honking his horn. At the country club Roxie retells how she fainted at the sight of a giant. Her father not believing the story but insulted that their guest (who name I can be bothered to look up) decides to go to the site where Roxie saw this giant.

The next day Roxie, Tom and Robert go back to the desert road where Roxie had seen the giant. Finding proof to Roxie's story, her father gets a helicopter ride into the desert to find this giant. So armed with an overnight bag, a camera, binoculars and no water Robert takes off into the desert. After some stock animal footage and a few minutes of walking he meets Eegah. Robert tries to take a picture of Eegah but Eegah is protective of his image and how it is used. So Eegah uses his club to explain this to Robert. Robert's mind is so blown by a caveman giant that is protective of his image rights that he trips and falls.

We cut to the country club where Tom and his band playing some song about a girl and Roxie swimming in the pool near by. After Tom's musical number Roxie gets a phone call from her father's helicopter pilot. The helicopter was having the gasket changed and would be unable to pick up Robert. This calls for Tom and Roxie to breakout the custom p.o.s. dune buggie.

What follows is five minutes of these two twits driving pointlessly around the desert to pad the run time. At some point they remember why they are there in the first place and they go to meet the father. Finding that Robert is nowhere to be found they set up camp for the night and crack out the guitar and Chekhov's transistor radio. Tom sing yet another song and then the two of them sleep for the night. Eegah uses his mad giant ninja caveman skills to sneak up on the two of them but the Chekhov radio goes off at random and scares Eegah away.

The day for night filter rises and our heroic couple decide to split up because nothing bad ever happens in movies when people do this. Eegah uses his ninja skills and sneaks up on Roxie again. This time their are not radios to save Roxie, so she defaults to her survival skills. By survival skills I mean faint at the worst time and get kidnapped by Eegah. Meanwhile Tom and some stock animal footage fail at finding where Roxie and Eegah have disappeared to.

Elsewhere in this horrible movie, Eegah reunites Roxie with her father. Eegah also shows Roxie and Robert the mummified remains of his ancestors. Eegah also grunts at them as though they were still alive and can talk back to him. At this point Robert gets the brilliant to have Roxie shave him because his clavicle is broken and he has to look his best to happy hour at the country club later that night. This is Robert's cunning plan to distract Eegah long enough for the two of them to escape. The plan half works, Eegah wants to thank Roxie in private for the shave by ripping her cloths off. So Robert makes his escape and Roxie screams a lot and eventually works out running away is a good idea.

Tom is trying to form a new band with the stock footage animals when he hears the screaming and remembers that he is the heroic lead in the film. First he runs to see if Robert is the one screaming but Robert points him in the right direction. He catches up to Roxie and Eegah thanks to Roxie fainting again. Tom tried to shoot Eegah with the rifle but Eegah just takes and bend the rifle. So Tom is forced to throw rock at Eegah until he passes out from laughing.

The heroic trio are reunited and make their way back to the dune buggie. But Eegah recovers and uses his ninja ability to teleport to the cliffs where he can menace them as they escape the desert and retreat to the country club. Meanwhile, Eegah has returned to his cave and is grunting out with the benefits of stalking Roxie with his mummified. I have no idea what is said as all of Eegah's dialog is grunt and nonsense so I am assuming they told Eegah that he was better for Roxie than Tom. So Eegah takes off and ventures into amazingly generic California town to find Roxie.

Due to Eegah's ninja training he is able to get to town quickly and go unnoticed as a seven foot giant in a loin cloth. After some wacky comedy with a drunk, Eegah goes to a motel to show off some more of his mad ninja skills. However the police have been called so Eegah goes to the country club.

At the country club Tom is singing again. Eegah gets there and starts busting up the place. Roxie is unsure if she should get a restraining order against Eegah or if she loves him. Robert leaves the scene for a bit to get a martini. Eegah crashes the party where Tom and Roxie are and the police show up to kill Eegah. The end.

MVT: Richard Kiel. It is clear how he managed to have a career after this.