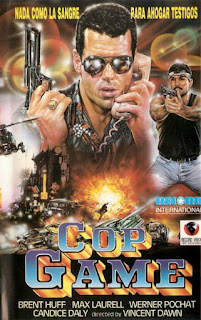 There once was a man named Vladimir Koziakin, and about this man’s personal life I know very little (read: nothing).  What I do know is that he produced one of the most entertaining, engrossing, and lovingly remembered books of my youth.  I’m of course speaking of Movie Monster Mazes, the 1976 tome that not only reinforced my love of monsters but also gave me new creatures to track down (if only their films would play on one of our stations; bear in mind this was back when we had maybe thirteen channels that could be tuned in on our television, and you were subject to whatever their programmers wanted to/could afford to run).  The premise is self-evident; there were fifty (“a panoramic journey through FIFTY (not Forty-Nine) FIFTY Monstrous Mazes!”) puzzles in the shapes of different cinematic fiends (as common as Godzilla, as obscure as The Monster of Piedras Blancas).  The accuracy on a few of the pieces would drive monster perfectionists insane (He spells Ghidorah as “Gidra” and calls Ray Harryhausen’s Ymir “Giant Ymu”), but I didn’t care.  I was too intent on running through the mazes (in pencil, of course, because the book cost ninety-five cents [!], and it’s not as if the book was easy to come by [that I recall]), erasing the lines, and doing it all over again (the erasures made their own permanent paths on the paper after a while, but the artwork was still attractive enough on its own to warrant paging through again and again).  There is a PDF of the book you can find online, the great tragedy of which is that many of the mazes have already been solved.  I’ve made it my mission in life to digitally remove all that and print each of these pieces to do again (and to share them with my monster-loving godchild if I can get him to lift his head up from his Nintendo DS or whatever the hell that thing is).  It’s good to have goals.  The relevance of this circuitous circumnavigation to Bruno Mattei’s (under the pseudonym of Bob Hunter) Cop Game (aka Cop Game: Giochi di Poliziotto), is that the film’s plot is so convoluted, you’ll almost certainly need to use the rewind button (the modern film viewer’s equivalent to a pencil eraser on a maze) to get all the way from start to finish with some idea of the plot intact.

During the final days of the Vietnam War, officers are being picked off one by one by former (maybe current?) members of the Cobra Force.  Enter special investigators Morgan (Brent Huff) and Hawk (Max Laurel) who are charged with getting to the bottom of this mess.  And they’re not afraid to break the rules in order to do it.

Post-Vietnam-War, movies set during almost any conflict tend to have a very dim view of the governments who send the soldiers off to fight in them as well as of war itself (though the latter notion in cinema has been around for much longer, it rose in prevalence around the time of this war and carried on ever after).  Typically this stink eye is focused on America, and there is far more anti-colonialist subtext at work (and not wrongfully so in both regards, I think).  Gone is the homogenized “rally round the flag, boys” depiction and attitude of good men fighting the good fight for a good reason.  Having the bloody footage of a war broadcast into homes on a daily basis not only peeled away the clean cut façade of warfare and changed the public perception of the men and women who fight, but it also forced filmmakers to steer toward more realistic portrayals of war time, even when the stories were fantastic in nature.  Things became grottier.  Characters became less idealized, and many began to lean far more to the dark side than to the light.  Italian filmmakers, combining the neo-realist movement developed and popularized by auteurs such as Vittorio De Sica and Roberto Rossellini with the sensational, primal elements which would quickly transform into a sleazy aura that became like a signature writ in giant, glowing, neon letters for exploitation hounds the world over, tucked into this new approach with gusto.

Naturally, different filmmakers achieve different levels of success with this approach, and, if you know anything about Mattei you know he does his level best to hit all the right notes, though rarely do his compositions orchestrate the way I’m sure they were first envisioned.  I’m also quite confident that his motives were more monetary than artistic, and I have zero problems with this.  So, we get a lot of exterior shots of the Philippines standing in for Vietnam, and the footage from the streets adds the appropriate flavor to the proceedings.  The attitude is present with Hawk telling Morgan that he comes “from a country of assholes,” that America is “playing cowboys and Indians” in Vietnam, and most presciently, “After you get back home, you will forget all about me.  But I will still be here, drowning in a sea of shit.”  Shooman (Robert Marius) commands the Cobra Force, and is alleged to have destroyed a village full of women and children in bloodthirsty pursuit of the Viet Cong (a trope of Vietnam War films inspired by the infamous My Lai Massacre in 1968).

Likewise, we get the populist components such as plentiful gun fights, chases, and brawls.  Hawk and Morgan break a suspect’s fingers to get him to talk (in broad daylight and full view of anyone wandering by).  What feels like a large chunk of run time takes place intercutting back and forth to scenes in a strip club (with French cut bikini bottoms and fashionably torn half shirts aplenty, but somehow no nudity) which feels more Eighties than anything else in this film, barring Huff’s dangly left earring.  Morgan and Hawk are flippant to their direct superior Captain Kirk (yes, really, and played by the late, great Romano Puppo) and everyone else they encounter, dress exclusively in street clothes, and don’t give shit one about any collateral damage they cause while doing their job.  The film does manage to balance these two perspectives (gritty, yet overwrought) fairly well, but it also piles on plot points nigh unto the breaking point.  In fact, once you add on the idea that a Russian spy named Vladimir has infiltrated the American armed forces, may or may not be a heroin dealer, and may or may not have had a hand in or is just spreading rumors about the village massacre and what any of this has to do with the initial murders, your head will be spinning, especially since the filmmakers don’t care about connecting scenes or ideas until it’s absolutely necessary.  Luckily, the aspects of the film that work (Mattei knows his way around action sequences, and there is a quasi-Noir angle that I enjoyed) do so well enough that the labyrinthine story and the writhing the script has to do in order to attempt resolving it become like frosting on the multi-flavored layer cake that is Cop Game.

MVT:  Huff loves giving everybody guff (yes, I made this sentence rhyme; sue me).  He is jaw-clenchingly anti-everything, so much of the joy in watching his character do his thing lies in how relentlessly hard-headed he is in every single way.

Make or Break:  Without giving away exactly why it’s so outstanding, there is a car chase in this film that I would attest can stand up to any in the history of cinema.  Okay, that’s an outright lie, but it’s so much damned fun, I couldn’t help loving every second of it.