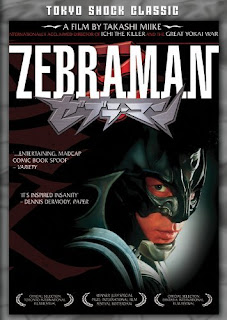 
Time to learn some useless knowledge. Super Sentai  is genre of Japanese television programing that involves a group of costumed heroes with a gimmick. That gimmick being any combinations of magic, robots, amazingly stupid choreography, random explosions, alien technology, and or anything else that can be merchandised. The plot of these shows is a group of photogenic nineteen to twenty five year olds who get the ability to wear weird costumes and fight the forces of evil until their contract runs out. Now that's out of the way, time to cover the insanity that is Zebraman.

In 1978, a sentai set in 2010 aired about a human school teacher who turns into Zebraman and battles aliens. Due to horrible ratings the series was canceled after seven episodes. Thirty two years later the movie catches up with Shinichi. He was fan of the show, currently a teacher, and his life has more or less fallen apart. His wife is having an affair, his daughter is dating older men, and his son is being bullied at the school he teaches at. He copes with his life falling apart by making and dressing in a Zebraman costume.

This all changes when a series of violent unexplained murders starts happening and Shinichi has new transfer student named Shinpei. Shinpei is also a fan of Zebraman thanks to someone uploading the original Zebraman episodes on to a site like Youtube. Meeting this kid encourages Shinichi to be Zebraman and to fight crime. This crime fighting leads to Shinichi being able to carry out the same silly moves that the TV Zebraman could do. Also, he learns that people are being controlled by bad cgi green slime aliens.

As superhero movies go, it has less plot holes than a Marvel movie and is happier than DC movie. Overall, it is an enjoyable movie but the plot tends to drag due to showing as much information as possible about Shinichi. There are a lot of scenes that would have been better as montages like Shinichi trying to fly as Zebraman. Yes watching a grown man in a silly costume throwing himself off a bridge in the hopes missing the ground is funny but too much time is spent showing this.

This is a go see it now to any Takashi Miike fans and worth watching over all.

MVT: The way this movie takes PG-13 material and all the sentai silliness without making you feel dumb for watching it.

Make or Break: Keeping the CGI as cheap as what you find on a TV show.