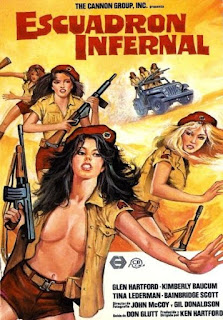 The creation of the Ultra-Neutron Bomb really has young firebrand Jack (Glen Hartford) cheesed off.  After browbeating his diplomat dad Mark (Jace Damon) and threatening to reveal this new horror to the whole world, the young man is kidnapped and held for ransom by the Sheik (Marvin Miller).  Government stooge Jim (Walter Cox) has a not-so-brilliant idea: get Las Vegas showgirls, give them ten days of combat training, and send them off to Syria to rescue Jack.  Enter Jan (Bainbridge Scott) and the Hell Squad.

It’s kind of amazing to me that Kenneth Hartford’s Hell Squad (aka Commando Squad aka Commando Girls) was released in 1986, because this is a movie dated by at least a decade or two in all of its aspects.  The score consists of library pulls which are recycled ad nauseum, and their style screams of low rent Sixties fare.  The sets are spartan to the point that they look like the set dressing for a school play, and the film is also conspicuously setbound (even the exteriors feel like they were shot indoors; they couldn’t afford a fan to blow the characters’ hair while they pretend to travel in topless vehicles?).  The comedy is as low brow as low brow gets (Colonel Balin [Lee Coy] gawps at the ladies’ breasts through binoculars while standing just a few feet away from them), and it’s the type of good-natured burlesque-y chauvinism that was grinned and shrugged off for a long while.  It even has a genuine Scooby Doo ending.  There is endless moralizing from characters about this new weapon, which is interesting since the film’s premise is militaristic, but this was also at a point when nuclear proliferation was a big issue.  At a time when macho films like Rambo: First Blood Part 2 and Missing in Action were the standard for action films, Hell Squad plays like a throwback.  However, I tend to think that this is more due to budget restrictions and Hartford’s talents and proclivities than it is to some kind of quasi-counterprogramming or nostalgia trip.

The core concept of the film is a good one.  The idea of a group of women kicking ass and taking names had certainly been done before (Ted V Mikels’ The Doll Squad, to name but one), but these women are more of a single unit than they are unique individuals creating a platoon.  To my mind, for as empowering to women as this is on its surface, this is still very much a male fantasy film.  Men love watching women being aggressive, and I think (bearing in mind I’m no psychologist) this relates directly to sexuality.  Women who are physically forceful and/or violent are imagined (and let’s be honest, it’s true sometimes) to be more bold in their sexuality.  This means that they are perceived as not only more sexually open but also as more dynamic (let’s call it) in the sack.  This film plays to this basic assumption, but it never takes it that extra step to actually have the women seize men sexually.  No, they kill men (and get to slap a few around a bit), and then go home and take communal baths.  While this plays on a hard/soft dichotomy, it also relates back to this being a film out of time.  The filmmakers are much happier to be voyeurs on the women (the baths, they all gather in their swimsuits to await the announcement of who made the squad [not that it matters, since the characters are all anonymous], a scene actually stops just so the camera can tilt down to leer at a couple of girls’ jugs, and so forth) in an R-rated, cheesecake kind of way.  This lack of non-battlefield action undercuts what the film advertises itself as (consciously and subconsciously), and it robs it of any impact it may have had.

I love the sort of unorthodox teams that films can give us, such as the bikers who took on the Viet Cong in 1970’s The Losers.  Naturally, it doesn’t make any real world sense to take a person or group of people who have some basic skill (bikers, showgirls, florists, whatever), train them to kill, and send them into a danger zone.  If these scenarios actually occurred, the powers that be would almost certainly simply take available agents, soldiers, and so forth, and mold them to fit a cover story (that is, after all, their job).  But we kind of like it the other way around.  To take normal folks and force them into these new roles, again, it plays into an audience’s fantasies.  We all want to believe that we’re special.  We all want to believe that we could whack villains and score women like a James Bond, and movies like Hell Squad are meant to give us a bit of that hope.  After all, if a bunch of Vegas showgirls can kill terrorists and rescue hostages, couldn’t we all?

But for how offbeat this film is, it almost completely fails to either maintain interest or satisfy in any way.  There is a cyclical nature to the story’s structure that kills any building of tension and momentum.  The girls go to their hotel room.  They all get in the bath and shoot the shit for a while (none of which means anything to anything).  The phone rings.  Jan is told where the girls need to hit the next day by an anonymous male voice (shades of Charlie’s Angels).  The girls go out and kill the Arabs they’re told to kill.  They come back to the hotel.  The terrorists mistreat Jack for a few seconds.  Back to the women in the bath.  There is little to no variation in this routine, and it quickly wore down my patience (and the paucity of actual naked showgirls did nothing to bolster it, I can tell you).  Add to this that the violence in the film is utterly sanitized (I don’t think there’s a spot of blood in the entire film, and that’s even with a tiger attack [don’t get your hopes up; it’s not as exciting as it sounds]), and you get an extremely bland execution of an intriguing idea.  None of this is helped by the dirt poor acting abilities of everyone involved (with the exception of Miller, who made quite a career for himself with his unique voice), which is akin to watching people describe grass growing.  If you want to see women in strong action roles, you’d do better to watch an old episode of G.L.O.W. (Gorgeous Ladies Of Wrestling).

MVT:  The idea at the film’s heart is a good one.  It could have been the foundation for a fun movie.  But it’s produced like a cake full of air.  It looks good at first glance, but there’s nothing inside.

Make or Break:  Around the third time that the squad return to the hotel and gather in the bathtub it becomes apparent that this is as high as the bar is going to be set for this thing.  And you could likely step over that bar without the slightest worry of tripping on it.