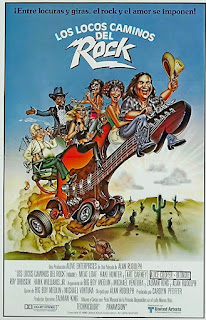 Why did the armadillo cross the road?  So Alan Rudolph could show that his film Roadie begins and ends in the state of Texas.  Here’s the layout.  Young, hyper Travis Redfish (Meatloaf) lives at his father Corpus’ (Art Carney) salvage company and makes deliveries for Shiner Beer.  Catching sight of young Lola (Kaki Hunter), a groupie-in-training, Travis finds himself swept up into the whirlwind lifestyle of a rock ‘n roll roadie.

One might think, at first blush, that this film would concern itself with the idea of the call of the open road.  But this is not the case.  Travis has no desire to go on tour with musicians.  He doesn’t feel the pull of an opportunity to live life.  The only reason he becomes the world’s greatest roadie is because his mindset is antithetical to that of those around him.  This comes from his background with his dad.  Corpus and Travis are able to rig and create all manner of contraptions to make life easier.  They have a phone booth in the house that extends itself outside if someone wants a little privacy.  Travis makes his entrance (at home and in the film) on a makeshift crane/elevator that carries him between floors.  Corpus surrounds himself with a multitude of televisions, all tuned to different stations.  The thing of it is that the Redfishes are pretty much idiot savants (with the exception of sister Alice Poo [Rhonda Bates], who is just an idiot).  To call them simple folk would be understating things.  For example, none of them can pronounce “Pomona,” though Corpus’ enunciation is the one they stick with because he’s the smartest of them (hey, I had a friend who used to pronounce “San Jose” as “San Joes,” so who am I to judge?).  Corpus installed homemade braces on Alice’s teeth.  The best illustration of the Texans’ shitkickerhood, however, is the scene where Corpus, Alice, and BB (Gailard Sartain) are eating ribs and drinking beer.  Their faces are covered in pork and barbecue sauce, and the mere idea of table manners is utterly foreign.  This tableau is a snapshot of Travis.  Roadie is basically Being There with Deliverance’s Hoyt Pollard as the protagonist.  Or maybe just a quasi-Forrest Gump antecedent minus most of the sentimentality.

At the center of the film is the mismatched relationship between Travis and Lola.  These are two extremely flawed people, neither of whose world view is all that appealing.  Travis’ instant love for Lola is amusing.  He declares that, “That’s the first woman I’ve ever known who I’ve cared for as a human being,” after seeing her for a split second.  Lola knows that Travis is into her, and she knows how to manipulate him into getting her way.  Her goal in life is to be a groupie, but first, she has to have sex specifically with Alice Cooper as a sort of deflowering ritual.  Lola delights in her sexuality, but she’s naïve in its meaning and about life in general.  Much like Travis, she wears blinders to allow for her point of view, because nothing else exists or, at the bare minimum, is less than important.  She is thrilled to inform Travis that she’s only sixteen (the grin on her face when she labels herself “jailbait” is a bit bizarre).  She picks up a box of cocaine, thinking it’s Tide laundry detergent, and has it maneuvered off her by a little old lady.  Her usefulness to rock ’n roll lies in her body, not her brains, and she’s okay with that.  At first.

Travis resents that Lola is eager to give it up to anybody who plays a musical instrument.  He feels protective of her, but he never bothers to tell her this.  It’s easier for him to react to her and lash out as needed; all emotion, no thought.  Lola resents that problem solving comes so easily to Travis, and he is more desired by everyone in the music biz than she is.  She feels that she is meant to be a Muse, but it’s Travis who inspires others.  He powers a concert with manure and solar energy.  He fixes a feedback issue with potatoes.  Their odd couple relationship is essential to the film, but it loses interest due to their steadfastly willful ignorance.  These two are at their best when they both dig in their heels and defy each other, even though I wanted to smack their heads together many, many times.  The film, of course, resolves itself in Hollywood fashion, which not only undercuts the characters but also takes the perspective of one of them as being more “correct” than the other, when both are myopic and rather uninformed.

Any love that a viewer may have for Roadie relies on two things.  First is their desire to spot all the cameos (Roy Orbison, Hank Williams Jr, Peter Frampton, ad infinitum) and listen to some music.  In some ways, it’s a concert film, though it’s hardly Woodstock, being narratively driven as it is.  The performances are staged detours to keep the people who don’t care about the story in their seats.  Even when the characters are not at a concert, any montage on the road is accompanied by a song, using shorthand to portray bonding rather than actual bonding.

Second, and a far higher hurtle to clear, is one’s tolerance for Meatloaf.  While I admire the man’s verve, he is nigh-psychotic throughout the entire film.  Meatloaf is cranked up to a thousand, squirming his body all around, flopping his long, stringy hair thither and yon.  You may have seen Chris Farley’s impression of Meatloaf at some time or another, but let me tell you, Farley captured maybe one-eighth of the actual man’s bounce.  The thing of it is, Meatloaf does show glimmers of talent in front of the camera (and he would go on to prove that he has decent acting chops).  Nevertheless, his bug-eyed performance in Roadie is both grating and a little scary.  Whether this comes from his unfettered enthusiasm, his substance abuse issues, or a combination of both is immaterial.  It’s all there on screen, good, bad, and ugly.  There are several moments when he looks like he legitimately wants to eat whomever it is he is looking at (and I mean that in the cannibal sense, not as some crack against obese people).  The film does muster up some sweetness and charm, but it also does so after screaming in your face for almost its entire length, so it feels more like apologetic backpedaling (right or wrong) than the end game intended from the beginning.

MVT:  There is a wild amount of energy in the film.  To the point of exhaustion, but it’s there.

Make or Break:  The throwdown between Blondie and Snow White (a fictitious[?] band made up of little people) is truly glorious.