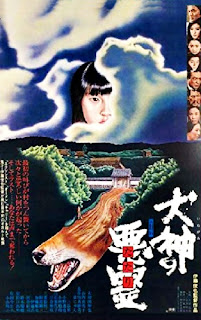 I don’t know much about Folk Horror other than that, whenever it’s brought up, most people simply point meaningfully to Robin Hardy’s The Wicker Man, and their audience nod their heads in enlightened agreement.  And fair play, because that is the ne plus ultra of the subgenre.  From what I understand, Folk Horror is rooted firmly in European traditions, but, when I look at something like Shunya Ito’s Curse of the Dog God (aka Inugami no Tatari), I have to wonder why films from other cultures can’t be included?  Maybe they are, and I’m simply ignorant of the fact, but a lot of Asian Horror that involves itself with the supernatural tends toward the struggle between modernity and tradition.  Perhaps proper Folk Horror’s ties to religious themes is the key, since they specialize in Christian/Pre-Christian ideologies in conflict, and Christianity isn’t the religion that most think of when they think of Asia.  Even in Ito’s film, the only religion represented is Shinto, but the eponymous Dog God is an ancient, rural force taking revenge on a man who is contemporary and interested in exploiting a small village for its Uranium deposits (that is, something which brings more modernity, both good and bad).  Still, this man, Kano (Shinya Ohwada), quickly embraces the concept of the Dog God and the old methods employed to try exorcising it.  Also, there is no ancient sect at the heart of the plot, just some paranoid, superstitious farmers (who happen to be half-right).  With that in mind, I can’t say that the film is Folk Horror by definition, but it is in spirit, at least to some degree.  But, hey, I could be wrong.

Kano and his co-workers race around the countryside looking for Uranium to refine.  On their way to the village of Kugamura, they pull a trifecta of transgressions.  First, they spy on a pair of maidens skinny-dipping (this is really the most innocent of the three, though the women play a crucial part in the remainder of the story).  Then, they run over a shrine (guess who it’s devoted to).  Then, they run over a young boy’s dog, and then they split.  No amount of business success is going to save these guys at this point.

Outside of the Folk Horror shadings, Curse of the Dog God is a story of supernatural revenge that stems from several sources.  First, it is pure vengeance, as the outsiders take advantage of the villagers and their land.  Granted, the villagers are paid for their property, but the fact that this company rolls in and starts digging in the mountains, despoiling its natural purity is important.  Kano marries Reiko (Jun Izumi), daughter of one of the men whose land Kano wants to lease.  Despite Reiko and Kano’s statements that they are genuinely in love, it still feels exploitive, or maybe it was at first, but true love developed (we’re never shown this progression, so we have to fill in some blanks).  Therefore, on the one hand, the Dog God is attacking to protect its home turf and for the disrespect it has been shown by these outsiders.  On the other hand, there is the angle of human love and jealousy.  The Dog God, apparently, does not invoke itself but rather is invoked through someone else in a Pumpkinhead sort of way.  The person accused of this is Kaori (Emiko Yamauchi), Reiko’s longtime friend and daughter of a farmer who refused to lease his part of the mountain to Kano and his cohorts.  Kaori also loves Kano, and since she didn’t win his favor (because her dad didn’t acquiesce to Kano’s business dealings, most likely), she wants to remove the competition.

Yet, even this doesn’t completely explain the mechanics of this sinister force.  In fact, it’s never entirely discernible exactly what, who, or why the Dog God is what it is or does what it does.  There is no exposition clearly detailing what the Dog God wants, what will sate its appetites, or why it chooses whom it does to possess.  It is nebulous and fickle, like the natural world from which it springs.  The one thing it definitely desires is the destruction of Kano and anyone in contact with him.  Even when Kano makes a strong connection with the village and becomes genuinely concerned for the welfare of its inhabitants, he is still a target.  Kano becomes the redemptive hero once certain events and facts come to light, but the Dog God truly doesn’t care.  This encompasses a level of innocence corrupted, not only of the land but of its people.  Young Isamu’s (Junya Kato) innocence dies with his dog, Taro.  The boy is bent on making Kano’s life miserable, going so far as to pelt him in the face with a rock at Kano’s wedding.  The villagers themselves become corrupted, physically by the byproduct of the Uranium mining and spiritually by the superstitions to which they cling.  The turmoil of their traditions vying with their more mercenary desire for money and what this allows into the village breaks them down.  They do not accept that their choices caused any catastrophes they experience.  It has to be caused by the Dog God, so the obvious thing to do is attack the only family in the village who didn’t join in selling out, and that would be Kaori and Isamu’s.  Interestingly, their family were outsiders before any of this happened.  When things go tits up, they are only further ostracized and persecuted.  Finally, there is Mako (Masami Hasegawa), Reiko’s younger sister.  She is friends with Isamu, and she alone tries to bridge the gap between the oddball family and the rest of the village.  Nevertheless, there is a secret in her own family that marks her as corruptible as well, and the Dog God is, if nothing else, an equal opportunity defiler.

Ito brings a nice sense of style to the proceedings, just as he did to no less than three of the famous Female Prisoner Scorpion films, including the arguable best of the bunch: Jailhouse 41.  There are Dutch Angles galore, and Ito does some truly haunting things with lighting throughout the film.  My main problems are twofold.  First and foremost is the point that none of the characters are interesting, with the exception of Mako.  Confoundingly, she also gets the least development and/or attention paid to her until the very end, but by that point, anything that happens to her feels like it’s brought about simply because she’s one of the last characters in the film.  Kano is a slab, and both Reiko and Kaori’s fawning over him is inexplicable, even moreso since we have seen none of how their relationships grew to start off.  There’s no real reason for the audience to care about them.  Additionally, is the fact that the Dog God appears to play by a set of rules we are not only not privy to but that change at a moment’s notice just because.  While this part of the whole setup, it makes for some chaotic viewing.  Thus, Curse of the Dog God is mildly intriguing for how different it is, but this is also the same reason it just doesn’t succeed like it should.

MVT:  Ito’s professionalism and devotion to his craft shines through.

Make or Break:  The big finale plays it as straight as the film ever will, and this part, at least, works like gangbusters.