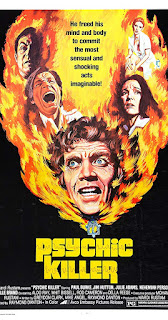 The ability or power to perform acts of vengeance through astral projection would be quite desirable to anyone who had an ax to grind.  Don’t get me wrong, I wouldn’t use this power for acts of murder or violence but maybe something embarrassing for my enemies.  For example, a depantsing of one of my foes in a public place.  That would probably bring me satisfaction.  If one were more bloodthirsty and felt their enemies deserved death for what they had done, you could potentially make a pretty interesting film from that premise.  Psychic Killer from 1975 attempts to tell a thrilling story from this idea, but unfortunately the idea is the only thing interesting about this movie in the end.

Psychic Killer is an early example of the slew of psychokinesis horror and thriller films that were being made during the 70’s and early 80’s.  Psychic Killer even came one year earlier than Carrie, which is the film that launched this sub-genre into popularity.  Unlike Carrie, Psychic Killer fails to generate any sympathy for the suffering protagonist, Arnold Masters, played by Jim Hutton.  Hutton does his best with what he’s given, but after the first act his character spends much of the movie sitting in a chair as his unseen spirit does the violent deeds.  The film also fails at being an effective proto-slasher.  Psychic Killer and Patrick, from 1978, share a lot in common.  With the exception of one kill, Psychic Killer simply doesn’t deliver when it comes to a good murder sequence like Patrick was able to do three years later.

We’re introduced to Arnold Masters as he awakes from a nightmare and attempts to escape from an institution for the criminally insane.  He claims he’s innocent of killing the doctor who treated his now deceased mother.  Masters holds a very strong grudge against those who incarcerated him and those he feels neglected his mother prior to her death.  Masters befriends another imprisoned patient who, with the help of an amulet, teaches Masters the art of astral projection.  After the real murderer of the doctor is convicted, Masters is exonerated and released from the institution.  He is now ready and capable of exacting his revenge on those who have caused him so much pain through his newly learned powers.

The film starts off promising.  Hutton does well early on expressing his character’s torment and we begin to get behind him.  There’s a pretty amazing dummy death in the first act and an introduction to a slimy psychiatrist who’s taking advantage of one of his female patients.  The setup of the astral projection is decent and makes for an interesting mode for revenge.  Unfortunately, when we get to the scene with the psychiatrist the film begins to slowly go downhill.  Masters chooses the psychiatrist as his first victim but there’s really no payoff with his death.  He’s killed off-screen with just a dribble of blood running from his mouth as he lies motionless on the ground.  Most of the murder sequences are a letdown.  The film doesn’t go far enough with the gore, with the exception of one scene but by then it’s too little too late, and it fails at building any suspense.

At times it didn’t seem like the filmmaker was sure what kind of film he wanted to make.  It’s setup like it’s going to be a thriller but there are no thrills or suspense.  The editing doesn’t work and the score is forgettable.  Because our killer can’t be seen stalking his victims, we’re never on the edge of our seat waiting for him to strike.  It just sort of happens.  The film doesn’t work as a horror film either due to the already mentioned lack of violence and gore.  There’s a shower scene death that’s decent but not that memorable and a death at a butcher shop near the end that’s pretty good but by then you’re pretty much checked out of the movie.  It even at times feels like the director was going for some dark comedy.  An attorney, whom Master’s blames for his imprisonment, is shown singing opera at a construction site just before he is crushed flat by a pillar like in a cartoon.  The intentional comedy falls flat and there isn’t enough unintentional comedy to save the picture.

It doesn’t help that the film is a bit confusing at times.  This should never be the case in a low-budget B-movie, such as this.  When Masters is preparing for his out-of-body experience, we get quick black and white dreamlike sequences that show a person harming Masters’ mother.  We’re not sure until later who these people are.  In the case of the lawyer, I wasn’t sure who he was and why Masters wanted him dead until I had deduced that he could be the only character left on Masters’ hit list.  Another example of this is the murder of the butcher, played by Neville Brand.  There is never a motive given for why Masters wants this character dead or how the character is linked to Masters’ mother.  It just seems like the filmmakers wanted to increase the body count and they had access to Neville Brand for an afternoon.

The psychokinesis thriller is an interesting sub-genre that has brought audiences many entertaining films over the years.  Psychic Killer has the honor of being one of the first of its kind and perhaps even inspired some of the films that would follow.  Sadly, that’s as much praise as I can give this one.  When I think of some of the most entertaining movies that could be lumped into this sub-genre, films like Carrie, Scanners, and The Fury, I’m reminded of their spectacular endings and having to pick my jaw up off the floor.  When I think back to the end of Psychic Killer, I’m reminded of its lackluster ending and having to pick my eyelids up off my face.

MVT: The premise of the film.  It had so much potential.

Make or Break Scene: The murder of the lawyer.  This scene broke it for me.  No suspense, no gore, no laughs.
Score: 4/10
Posted by Bryan Davidson at 10:27 AM