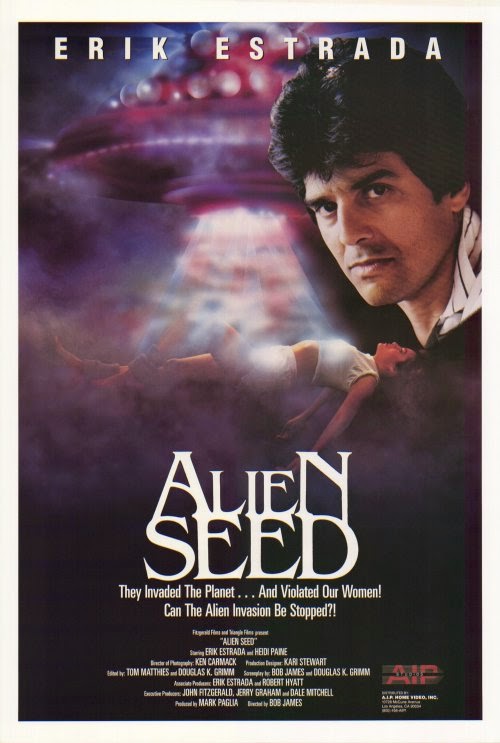 Mary Jordan (Shellie Block) loves to jog, and she even has her sights set on Olympic gold in the near future.  If only she hadn’t been abducted and inseminated by aliens.  Now her life is in mild turmoil.  Enter journalist Mark Timmons (Steven Blade), who types while wearing sunglasses indoors as if he were Saturday Night Live’s Michael O’Donoghue, and has been in contact with Mary for the purpose of telling her story to the whole, wide world.  Of course, Mary is also being pursued with much more malicious intent by the probably/definitely insane Dr. Stone (Erik Estrada), and when Mary’s sister Lisa (Heidi Paine) gets abducted too (gee whiz!), all bets are off.  Not that they were ever really on.

I am in absolute amazement how vivid and downright coherent dreams are when portrayed in media.  They may have odd elements in them, but oftentimes they’re little more than either a clue to a mystery the characters need to solve or a shorthand to delineate a character’s inner turmoil.  Personally, I rarely remember my dreams, but several differences stand out between mine and those in fiction.  One, the people I’m with are rarely people I actually know.  In fact, outside of a few instances, they’re simply bodies serving as placeholders in whatever events are taking place, and they are just as likely to become someone else (recognizable or unrecognizable) ten seconds down the road as not.  Two, not only do the people change at a moment’s notice, but the settings do as well.  I don’t even need to leave one place and go to another.  Sometimes all I have to do is turn my head, and suddenly I’m nowhere near where I started.  Three, nothing ever seems to be resolved at the end of my dreams.  They usually begin (if they have beginnings at all) and end with very little having taken place and very little of anything with any explicit value having been learned.

There are themes that run through many of these dreams, I’m sure, and I’m even more certain that there are those who would suggest that the reason these themes remain constant in my dream life is because they remain unresolved in my waking life.  I understand the reason that dreams seem so cogent in movies, television, and so forth.  They need to serve some narrative function, so they can’t be as deliriously frustraneous as those I’ve experienced.  And that’s what, funny enough, Bob James and company get (mostly) right in their film Alien Seed.  The dreams in this film are nigh-unintelligible outside of the god-awful EBEs (Extraterrestrial Biological Entities) that are peppered here and there in them.  There is a woman sleeping in a very wet bed with some unknown person next to her.  There are women in nighties getting splashed with blood (the only reason I could decipher for this one was as a surrogate wet tee shirt shot).  There are shots of fire.  The point is little to none of what we’re shown is integrated into the film in any significant way.  I suppose that some of it is meant to mimic what UFO abductees have recalled of their experiences, and I can appreciate that.  But so much more of it is just visuals.  Granted, there are some nice boobies in said visuals, but otherwise there’s little point.  But that’s enough for some folks, and it absolutely fits with my personal experiences.

The “alien messiah” angle of the film is easily the most intriguing.  As has been posited by people for decades now, aliens have supposedly been integral in forming and guiding our civilization since its very beginning.  It’s been said they helped build the pyramids of Egypt (most famously).  It’s been said that they have regularly chosen humans with which to breed.  It’s been said that the human race sprang forth as an experiment conducted by aliens, that we’re living on a gigantic Petri dish under a galactic microscope or worse, that we’re being bred as some form of cattle (in which case you would think they should have harvested their product some time ago and/or should really get on the ball with the seeming state of global affairs).  For my part, I can’t fathom why aliens would want to interbreed with human beings, especially if they’re so vastly superior and so much further evolved from us.  Unless, of course, Earth is a big old interstellar brothel for extraterrestrials, and their outer space contraception isn’t all it’s cracked up to be.

Regardless of how involved or uninvolved one wants to get in considering this subject, Alien Seed does its damnedest to play it all inconsequentially and straight down the line.  The government (read: The American military-industrial complex) wants to possess Lisa’s baby to harness its power and increase their influence across the globe, because peace doesn’t sell (contrary to what Dave Mustaine may tell you).  The Reverend Bolam (David Hayes) and his “ministry,” which I believe is in league with General Dole (Terry Phillips), also claim ownership of the infant and the power it will bring, but his motives (whatever his specific aims may be) are more personal.  Bolam is depicted as a genuine man of the cloth, but he is also depicted in the standard cynical way for this type of character.  The very first scene he’s in, Bolam’s eyes bug out of his head as he reminds his secretary (Marilyn Garman) that they will have their usual sexual liaison that evening.  He is in a constant, diaphoretic state of agitation.  We even get a throw away shot of him tossing his clammy head back in revelatory ecstasy while kneeling by some votive candles (though he could just as easily be getting his knob shined by his gal Friday).  The most intriguing pursuer of Lisa and Mark is Dr. Stone as a biological riff on the Terminator (though neither the character nor the actor portraying him come even close to the impact of the James Cameron/Arnold Schwarzenegger/Stan Winston creation), but he gets so little screen time and he’s so ineffectual, you really have to feel bad that Estrada actually put his name on this film as a producer (an associate producer, I grant you, but still…)

What undoes this film in the final analysis isn’t that it’s dumb.  There have been plenty of dumb films stretching back to the very dawn of cinema.  And a lot of them have managed to be entertaining, even when they have been incompetent (and some are entertaining because of their incompetence).  Alien Seed is not one of those films.  There are elisions of time and plot points we are only told about when it becomes important to what narrative there is (and I’m being generous when I use the word “important”).  One can deal with characters who behave unlike actual human beings, but when it’s done with the intent of plot convenience, it’s irritating.  Motivations change just to attempt generating tension to keep the story afloat for a longer run time.  It doesn’t work.

It’s been a complaint of reviewers for many years that chase scenes are nothing more than padding for films/television shows that are light on content.  Now, you and I know this isn’t strictly true.  Some chase scenes are so well done and so well thought out, they become integral to the potency of the work in which they are featured.  With that in mind, there are no less than three chase scenes in this film, and I can tell you confidently that not a single one of them adds any value to this film as either narrative development or spectacle.  So, no, I don’t hate this movie because it’s dumb.  I hate it because it’s dull.  But you can just read that as “it stinks.”

MVT:  There are several scenes set in the topless bar where Lisa works (Mary may work there too, but who can tell?).  They’re entertaining and engaging for the most obvious reason.  And they’re the only reason I could see anyone watching this film.  Too bad there weren’t more of them.

Make or Break:  The scene where Mark visits Lisa’s apartment is stalker-y and implausible in the extreme.  He brings her Chinese food, and then she lets him in, and then she tells him to leave.  Then he sleeps on the couch.  If this scenario took place in reality, it would end in restraining orders, I assure you.