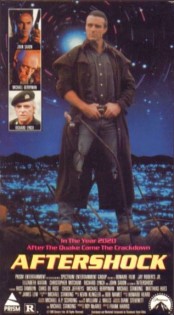 The 1990 post-apocalyptic film Aftershock would appear to have an embarrassment of b-movie riches. Where else can you find two kickboxing heroes, a one-armed Chris Mitchum, and Michael Berryman in leather, eyeshadow, and hot-red lipstick? Unfortunately, Aftershock is an example of what happens when there are too many ingredients in the cinematic stew for any cohesive flavor to form.

Shit has gone bad on planet Earth. While there are no mutant viruses or radioactive clouds to confirm this, we know we’re in the aftermath of a seismic shift in civilized living. The buildings are dilapidated and people live in communal enclaves. It’s overcast all the time, like London or Lima. There are really only two remaining classes: those scrounging for a dignified living, and the military fascists who shoot them. 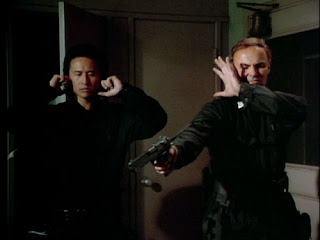 Leading the charge for Team Dickwad is Quinn, a security force commander played by John Saxon. He runs a tight ship, regularly dispatching his second-in-command Mr. James (Lew) to apprehend (kill) suspected rebels. Batting cleanup in the order is Brandt (DeRose), a ponytailed mercenary for hire who brandishes a six-shooter somehow capable of getting off 10 rounds without being reloaded. Their latest haul includes a comely blonde (Kaitan) dressed like an elementary school-teacher who materializes in a hazy glow in the middle of the slums. They dub her “Sabina,” which I believe means “we couldn’t afford Darryl Hannah” in Latin. While her inability to communicate suggests she’s mentally challenged, her strange clothing and lack of forearm barcode makes her very suspicious to the authorities. In this future, all civilians are branded for easy identification. 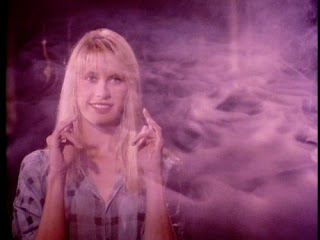 So what does the citizenry do to cut loose besides dodge bullets? Most folks in search of a good time gather at Franklin’s Bar. The clientele is a mix of losers, loners, and punks, but Hank Franklin (Tamblyn) keeps the moonshine flowing. Among the regulars are Cassidy, a muscular hulk played by Matthias Hues, and his friend Queen, a biker adorned in a wig and lipstick. While Michael Berryman is a unique actor with an already creepy look, the image of him in drag is something that may extinguish the lust in your heart at very inopportune times. (If you’re reading this, Jill: I’m sorry about last night -- I swear that’s never happened before). 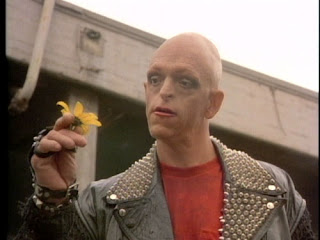 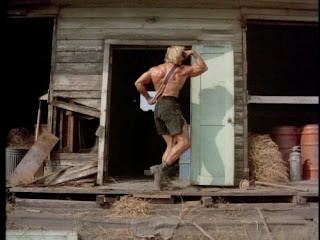 Thankfully, there are a few beacons of goodness flickering in the darkness. The central hero of the film is Willie (Roberts Jr.), a dirtbike enthusiast with karate skills nearly as impressive as his feathered hair. Even better is his braided rat-tail, which is either glued to his shoulder or hairsprayed into paralysis. I’m not sure if this was in Roberts’ contract, but the tail is always front-facing and highly visible.

Willie is also a connoisseur of fine women, and puts the moves on a lady handing out fliers for the anti-security revolutionaries. After some resistance, he mentions that “if you ever decide to be the mother of my children, look me up.” Now, you can give Willie points for his sentiments on settling down and propagating the species in such a dreary sociopolitical climate. But that’s the worst fucking pick-up line ever. No sober girl in a bar wants to hear you talking about getting her pregnant, especially when she’s handing out fliers for the rebel uprising.

Included in the resistance forces is Danny, played by actor and stuntman Chuck Jeffreys. In a security sweep of the bar apparently targeting sweaty dudes in vests, he and Willie are brought to Quinn’s detainment center. The latter is brought directly to Quinn’s inner office for a violent interrogation. It’s during these and other confrontations with the rebels that Saxon really shines; he doesn’t stand for back-talk and is happy to assert his authority with a pair of brass knuckles. Shortly thereafter, Willie and Danny manage to escape the facility with Sabina tagging along. 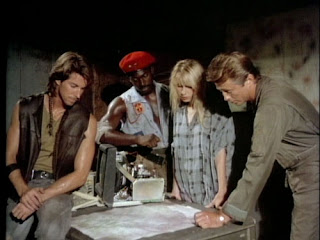 Her escape is of greater consequence than Quinn first realizes. His superior, played by Richard Lynch, shows up to deliver the news that Sabina is a high-risk detainee with an I.Q. twice that of any previously recorded and that her clothing is unlike any material known to man. Shocking news, to be sure, but not nearly as jarring as Lynch sporting a pair of late-80s Oakleys and stroking a terrified puppy for no particular reason.

The trio of escaped detainees hook up with Danny’s crew, led by veteran Col. Slater, played by Christopher Mitchum. It’s around this point in the film where things grind to a halt; nearly 25 minutes worth of people sitting around talking about hacked computer files, democracy, and other undercooked ideas. There are movies that can afford to move away from action set pieces in order to develop the characters and plot, but Aftershock is not one of those films. There are simply too many characters to emphasize any one (or two) for a meaningful period of time. The result is an incoherent mess; characters vanish and then reappear without explanation and we never really get a grasp for which supporting characters are important or why. Sabina reveals to the group that she’s an alien researching Earth, but you get the feeling that there was a better film hiding in here if only Harris had cut away this type of convoluted fat. 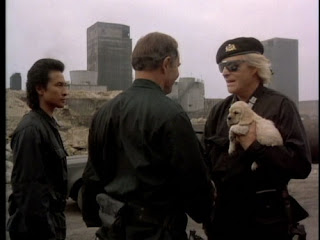 There’s a solid climax involving a few hilarious dummy falls as well as two decent fight sequences between Roberts and James Lew and then Roberts and Chris DeRose. Unfortunately, this comes a bit too late to compensate for the big sag in the middle of the film. The cheesy-good end only underscores how scattershot the film is overall, and while there are definitely glimpses of a really fun action b-movie here, it just doesn’t come together the way it should have. 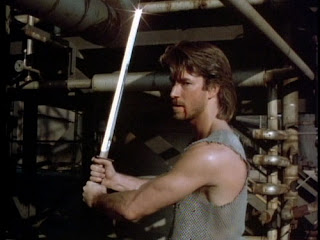 Make or Break: There’s an atrocious scene with Willie and Sabina hitching a ride with Hank Franklin where they all break into a sing-along with Jay Roberts Jr. jamming on the harmonica. This was a huge misstep in tone and felt incredibly forced. Awful to watch. Definite break for me.

MVT: Had he been given more screen-time, I might have been tempted to go with Chuck Jeffreys as a sleeper pick. But of all the performers, John Saxon is way above the rest in terms of skill and delivery. He turns in a pretty dickish performance, which is precisely what you need from your villain.