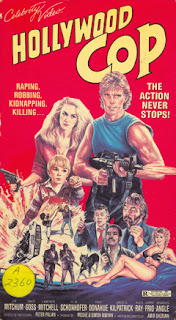 When you think of memorable action film henchmen, Goldfinger’s Oddjob, Lethal Weapon’s Mr. Joshua, and Al Leong from roughly 90% of 1980s action cinema spring to mind. Unfortunately, not every worthy henchman gets the notoriety he deserves. Animal, the bearded and oft-cackling henchman in 1987’s Hollywood Cop, falls into this category not simply because of the film’s relatively low profile, but because director Amir Shervan failed to include the actor’s name in the credits. This was but one in a flurry of egregious errors in Shervan’s American directorial debut, where the hair is feathered, the aviators are polished, and the jeans and jackets are a little on the snug side.

The audience gets its introduction to Animal in the film’s opening scene, where members of a gang are gathered poolside at the Feliciano mansion before an important operation. Feliciano (Mitchum) has carefully planned the kidnapping of the son of Joe Fresno, a former associate who screwed him out of a large sum of money. He demands that no one be left alive with the exception of the mother. Animal assures him that he’ll “kill them all” and then cackles maniacally. In response, Feliciano asks that the rest of the gang keep an eye on Animal because “he’s strange.”

Shortly before the kidnapping, single mother Rebecca (Shoenhofer) is grappling with the latest of her son’s mischievous outbursts. Little Stevie is washing a goat for the third time that day. Perhaps this is forgivable since they live on a ranch, but chronic goat-washing is the type of behavioral problem endemic to single-parent households. On the bright side, the kidnapping itself is a rousing success. The gang guns down several fleeing ranch hands before wrestling the terrified boy from his screaming mother’s arms. Raises for everyone!

Rebecca is left with a ransom letter demanding $6 million and forbidding police involvement. To whom can she turn for help? The police, of course. She crosses paths with L.A. cop John “Turkey” Turquoise (Goss), fresh off a recent rape and robbery bust that leaves three perpetrators dead and one officer violently ill after witnessing a beheading. Turkey is that ultra-rare breed of cop who works by his own rules and is regularly chastised as a loose cannon by superiors Capt. Bonano (Mitchell) and Lt. Maxwell (Donahue). From what I can tell, he doesn’t live on a houseboat however. Turkey and his partner, Jaguar (Kilpatrick), take Rebecca’s case and vow to bring her son back safely.

Having seen Shervan’s Samurai Cop a few years ago, I expected Hollywood Cop to be its sloppier and even more inept grandfather since it was filmed two years beforehand. Instead, I was surprised to find that this was the (slightly) more polished of the two. While so many of Samurai Cop’s weird moments could be attributed to an inexperienced cast, Hollywood Cop is chock full of grizzled veterans. Mitchum looks bloated but is suitably irritable as crime boss Feliciano, while Mitchell and Donahue do a bit more than cash checks in their limited screen time. The real standout here is Lincoln Kilpatrick, who looks like he’s having a blast as the oversexed and appropriately named Jaguar. Had blues legend Billie Holiday not encouraged him to pursue a career in acting, it's unlikely that he ever would have found himself performing alongside Sidney Poitier in the original Broadway production of "A Raisin in the Sun," or oil-wrestling two busty chicks in a completely unnecessary nightclub scene here. Thanks again for everything Lady Day.

The film’s action scenes are lively, for the most part. The foot pursuit near the beginning of the film which introduces the audience to Turkey leads to a severed hand and subsequent decapitation, both by machete. The shootout sequences contain some of the most wildly inconsistent behavior in the midst of gunfire I’ve ever seen. In one instance, a baddie writhes and twitches after taking several shots before sliding down a staircase to a (dead) stop. That’s reasonable. Just a few minutes later though, his cohort takes a shot to the arm and winces as if pressing on a fresh sunburn. During a climactic gun battle, Turkey shields Rebecca from gunfire by lying on top of her on the ground. This kind of selflessness would be admirable were it not for him sticking his ass in the air in a seductive manner. To quote a Beastie Boys lyric: “in the animal kingdom, they call it presenting.”

This was Shervan’s first American production, and it shows. Actors routinely talk over one another, a boom mic is visible during a scene without any dialogue, and he frequently films scenes with obstructive objects -- such as counter-tops and asses -- in the foreground. Shervan also spends much more time than is necessary on Stevie’s captivity and as far as child actors go, he’s pretty awful. Most of his lines occur in an attempted conversation with a Doberman guard dog. Yup.

Make or Break: The lone car chase near the back-end of the film. Sure, the vehicles Shervan chose are the types of shitboxes you'd inherit from a deceased grandparent. There's little flow, no real sense of danger, and the camera angles are pretty dull. However, even a scene as plodding as this still results in a ramped car, a man on fire, and a carsplosion within a 40-second time-frame. As an intersection of Shervan’s desire for visual bombast and his inability to properly execute it, this sequence was a clear make.

MVT: Director Amir Shervan. Even when the execution is clunky, his approach to filmmaking is sincere and the results are entertaining. When his dialogue is unrealistic and his characters' actions are inconsistent with acceptable human behavior, we dig him all the more for it.

Hollywood Cop isn’t a good film by most standards but like so many other action films of the 1980s, its charm lies in its flaws. This is “beers and buds” fodder and a pretty enjoyable watch for what it is. Even if you don’t dig the action, the bearded thespian behind the Animal character is a revelation.