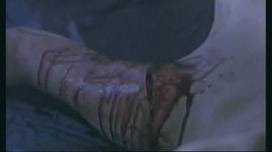 Dr Lamb is one of the better known Hong Kong category III thrillers and a decent gateway to the field. Filmed in1992 by Billy Tang and produced by and also starring Danny Lee this film is a mixture of true crime procedural and gore movie. The cast is headed by the versatile Simon Yam as the killer Lam Gor-Yu and bulked up, literally, by the always watchable Kent Cheng as one of the bumbling cops. Character actor Lau Siu-Ming also features as Lam Gor-Yu’s dad. He’s a regular face from the 80s onwards in various, typically Cinema City movies like A Better Tomorrow II.

The plot is simple, a dysfunctional taxi driver is caught developing photos of dead nude women and through police coercion reveals how he murdered four women under the noses of his family in their own home. He also tears them up with a circular saw, fucks their corpses and keeps their severed breasts in pickle jars. 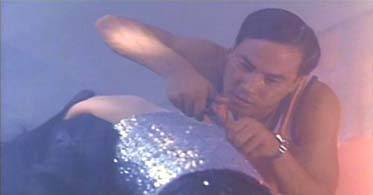 Typical of the genre, Dr Lamb is lewd, loud and garish. Yet its not as clumsy as a lot of Category III movies, there is a narrative flow from scene to scene and not too much pointless comedy and even less sex than usual. This movie really is just a bike for Simon Yam to ride down the crowded streets of Mongkok, laughing as he goes.

The personification of a Hong Kong demented cinematic killer, Simon Yam presents Lam Gor-Yu as a chilling, damaged shithead with a taste for necrophilia and fondling his niece whilst photographing himself doing it all. Despite the horrendous subject matter Yam carries a cinematic glow that makes him utterly compelling to watch. Other examples would be De Niro in Cape Fear, playing an utter mental yet having this fascinating magnetic pull, sucking the viewer in ,even as Yam props up a dead girl and plays park the sausage.

Only in a murderous mood when it rains, Yam cruises in his night shift taxi of death, presumably doing his normal work in between. His prowls are presented not unlike Taxi Driver. Lots of rear view mirror shots, with visions of wet neon streets and drunks lurching from bar to bar as giant Malboro signs glow overhead. Yam twitches, smiles coyly and howls like a wolf as he kills, he handles a circular saw with the precision of a wuxia swordsman.

When Yam isn’t on screen the film flounders a little, the cops are presented as motley bunch of investigators with Danny Lee really only there to bark some orders. No , this is Simon Yam’s flick with a haunting final shot to let you know who the top Doc is.

Make Or Break: Make for me is sadly, Yam tearing up his 2nd victim with a powersaw. Hooray!

MVT: Simon Yam. Along with Anthony Wong, he was one of the actors of note from that period.

Score: 7/10 A goos movie for Hong Kong fans to view and exploitation junkies in general. Much more fun than any Doris Wishman roughie!
Posted by Charlie Parker at 2:57 PM