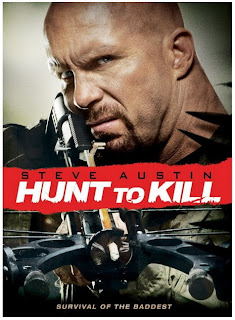 WHAT?! Stone Cold Steve Austin has been on quite the roll lately, starring in a bunch of straight-to-DVD action movies that more or less showcase the former pro-wrestler as a leading man. What makes HUNT TO KILL stand out from the rest of the bunch is that it reunites three of the antagonists from THE EXPENDABLES: Austin, Eric Roberts, and Gary Daniels. Well, sort of. Roberts does his thing and collects his paycheck before the opening credits even roll, but with Austin as the leading man and Gary Daniels as the henchman of the film's villain, there's a reunion of sorts for at least two of the villains from Stallone's summer blockbuster, albeit on a much lesser scale.

Jim Rhodes (Austin) is a retired Border Patrol Agent turned full-time deer hunter. He's also an out-of-touch single father who's being visited by his teenage daughter Kim (Marie Avgeropoulos). She's at an age where she's starting to distance herself from her father and rebel against him. It's not clarified as to whether or not she has a reason to do so (Austin being a deadbeat dad, etc.), or if she's just doing it because of outside influences. Whatever the case, the tension is there and Kim is on the verge of turning heel on her father.

Long story short, a group of thieves are looking for a guy who doublecrossed them, and their search takes them to Austin's neck of the woods in Montana. Through coincidence and being in the wrong place at the wrong time, their paths cross (the criminals and Austin) and the crooks end up abducting his daughter. In exchange for her safety, Austin agrees to guide them through the mountains and assist them in finding the traitor who stole their loot. Meanwhile, Austin is forced to watch while young Kim is abused by the criminals and nearly raped at one point. Once the loot is retrieved, Austin is left for dead as the criminals flee with his daughter. Little do they know, they've just fucked with The Texas Rattlesnake. 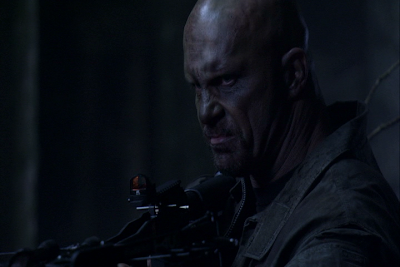 Austin recovers and uses his skills as a survivalist and a hunter (and a former Border Patrol Agent!) to rescue his daughter from the bad guys, stomp a mudhole in their asses, and walk it dry! But, of course, it's not exactly a walk in the park for the Bionic Redneck, especially when one of the villains is legit badass Gary Daniels. However, to say that HUNT TO KILL is predictable would be an understatement. The cast is great for the type of movie it is, but there's nothing fun about the film, and it doesn't bring anything new to the table whatsoever. It simply goes through the motions of being a typical action film. It seems the sole purpose of the film is to showcase Steve Austin, which is fine, to a certain extent. A majority of the people who watch this are probably doing so just to see Austin, and in that case they won't be disappointed. But for anyone else, and especially anyone looking for an outstanding action movie, HUNT TO KILL doesn't have a whole lot to offer. Even the whole dad-rescuing-his-daughter scenario has been done to death. On a side note, Gary Daniels is the worst fake smoker I've ever seen. 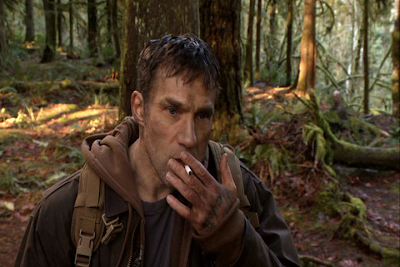 Make or Break: Surprisingly, I'm gonna go with a "make" instead of a "break". The scene that makes the film, in my opinion, and totally lets people know that HUNT TO KILL has no aspirations of being anything other than a typical action movie is the scene where Austin recovers and prepares to rescue his daughter from the clutches of the criminals. It's like a montage of action movie conventions. He cauterizes a wound, makes his own arrows out of sticks, and uses shoe polish to paint his face. I half expected him to cover his entire body with mud for no apparent reason, but it never went that far. I'm also not sure why he had shoe polish in the first place. 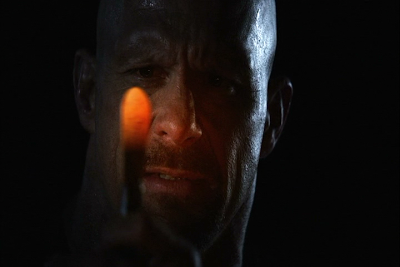 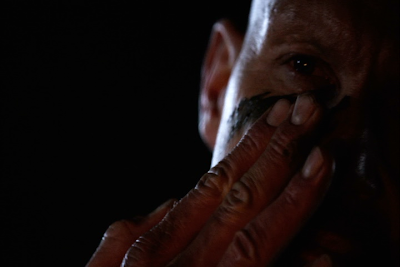 MVT: I can't not be Austin. It's his movie and he's the main attraction. His movements during his fight scenes are a bit stiff, but he does pretty well considering he has two bad knees and has had numerous neck problems that stemmed from his wrestling career.

HUNT TO KILL isn't a good movie, even by action movie standards. Its flaws could have been at least masked with a little bit of style, but nope. Instead we get the same low-budget look and generic background music that seems to commonplace in these types of movies. However, this is the type of movie you already know what you're getting yourself into when you see it. There's nothing deceptive about it. It's made for a specific audience and it never really claims to be anything other than a cheesy action movie starring Stone Cole Steve Austin. It doesn't break any new ground, but it's watchable and fans of Austin will obviously enjoy it, and that's the bottom line!
Posted by Aaron at 6:54 AM