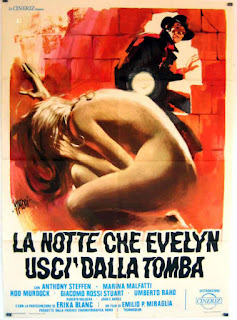 There is a cemetery near where I live.  Actually, there are quite a few (no shock there).  In one of them, though, there is a somewhat unorthodox mausoleum.  The cemetery is not that large (it measures about three blocks long and goes back another two [not city blocks, mind you]).  Anyway, the mausoleum I’m thinking of sits at the rear of the cemetery.  The family name I cannot recall, but inside the crypt is a statue of a demon.  Why this particular sculpture sits inside a mausoleum in a Christian cemetery, I haven’t a clue.  The rumor is that that the man buried there was a Devil worshipper (yes, I know it makes no sense), and that on the night of a full moon, the statue’s eyes glow.  Here’s what I can tell you; I have seen the statue.  It does exist and from what I recall, it definitely is of a horned person.  Whether that would be Satan, a satyr, or a reproduction of Michelangelo’s Moses statue is uncertain (I was about ten or so when I saw this thing).  The eyes didn’t glow when I saw it, but then again, I don’t remember if it was a full moon out that night, and I would probably swear that they did anyway, the human mind being as suggestible as it is.

Lord Alan Cunningham (Anthony Steffen) is a swinging widower who likes to pick up redheaded hookers, bring them back to his castle, torture, and kill them.  Nice guy.  Creepy brother-in-law, Albert (Roberto Maldera) knows about these attacks and extorts money from Alan regularly.  Alan’s friend Dr. Richard Timberlane (Giacomo Rossi-Stuart) wants Alan to get help for the seizures he has when he thinks about his dead wife Evelyn (which is a lot).  Cousin George (Enzo Tarascio) takes Alan to a party, where he meets, falls in love with, and swiftly marries Gladys (Marina Malfatti).  After moving into the castle alongside wheelchair-bound Aunt Agatha (Joan C. Davis), though, Gladys soon begins to get the feeling that Evelyn may have some unfinished business with Alan.

Emilio Miraglia’s The Night Evelyn Came Out Of The Grave (aka La Notte Che Evelyn Uscì Dalla Tomba) is a Giallo, but it really doesn’t feel like one at the start.  For the better part of the first forty minutes or so, all we get are scenes of Alan having seizures and whipping hookers in the torture chamber in which none of them is uncomfortable to be, inexplicably.  As such, there is no real mystery or anything to pique a viewer’s interest, with the exception of how Evelyn died, and even that isn’t addressed overtly in this portion of the film (though anyone who has ever watched a movie before can make a pretty good guess).  From this first half, one expects the film to be about Alan’s maniacal doings, basically a sleaze and torture film.  Thankfully, though, the story does pick up in the second half, but in all honesty, getting to the interesting part is fairly difficult, seeing as there’s nothing all that interesting going on to maintain interest, and the plot follows a repetitious cycle of events.

Anthony cannot let go of Evelyn, most prominently signified by the portrait in his bedroom of which he refuses to rid himself.  This leads to his obsessive behaviors.  He will not allow anyone with red hair in the castle (humorously, the five maids Aunt Agatha hires look identical, all the way to their blonde afros).  He is instantly attracted to Gladys and even desires her sexually (he wouldn’t allow a redheaded prostitute to kiss him, but he has passionate sex with Gladys), and the viewer gets the idea (based on previous experience) that part of the reason is her blonde hair.  His murderous episodes serve a dual purpose.  On the one hand, they allow him to take control of a situation that he couldn’t control the first time around.  On the other hand, they allow him to take out his anger on surrogates, something he never had the chance to do when his wife was alive.  And while the toll his wife’s death took on him is prevalent throughout the film, after Alan weds Gladys, his violent outbursts seemingly cease (seizures excepted) and are (somewhat disturbingly) never brought up again in any significant way (essentially allowing him to abrogate responsibility for these crimes).
The film uses flashbacks as both exposition and a reinforcement of the unreliable narrator facet on which the film is built.  We see a naked (we assume) Evelyn lilting through a misty glen.  Under a pine tree, she falls into the embrace of a naked (we assume) Alan.  And again, these sequences serve multiple ends.  The first is as an allusion to the biblical Garden of Eden, a time when everything was perfect, and there was no such thing as sin.  The second point is as suggested explanation for why Alan is the way he is now, and an idealistic interpretation of events which may or may not have happened, as well as something which is unattainable in the real world for Alan.  Yet a third point offers that these images only exist in Alan’s head, and are false, merely more symptoms of Alan’s sickness.

Despite the daunting first half, the film does come into its own once the supernatural elements enter play.  Early on, Aunt Agatha arranges a séance, wherein Alan sees an image of Evelyn and passes out, but this episode is shrugged off as being one of Agatha’s patented unfunny practical jokes.  It isn’t until Gladys informs Alan that she got his evening milk from a maid with red hair that suddenly avenues open up in the viewer’s mind.  The puzzle deepens through the rest of the film, and it plays heavily on the angle of revenge from beyond the grave.  Of course, this means characters are going to start dropping like flies, and here’s where there is an interesting twist on a traditional Giallo convention (it was interesting to me, anyway).  Those familiar with this subgenre know that the hidden killer is often only depicted on screen via his (or her) black gloves.  In this film, we do get the gloves, but they are yellow.  Giallo gloves for a Giallo film.  Of course, an observant watcher of the film will have a pretty good idea of what’s going on and by whom by the time things get interesting, but by that point, you’re along for the ride, and there are still several wild twists which I guarantee you will not see coming and make the film worthwhile to see, but it’s in no way one of the classics of the subgenre.

MVT:  Miraglia’s direction is slick, professional, evocative, and effective.  He is stylish or subdued as is necessary, and knows when those times are, though he could admittedly use some work on his pacing.  Personally, I’ll be seeking out more of his films in the future.

Make Or Break:  The Make is (as stated above) the moment when Gladys lets drop that the maid she met in the kitchen had ginger hair.  Something is up, and now the viewer actively wants to know what and how.  It provides the impetus for the momentum which will drive the film through the remainder of its runtime, right up to its lunatic finish.