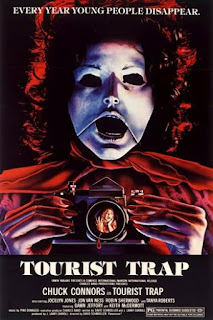 I used to have an oversized teddy bear when I was a child. I didn't have a cutesy nickname or anything for him, but he was fun to play with, as he was large enough to be a giant villain of Galactus-ian proportions to my other action figures. It didn't matter to me that he was fuzzy, unarticulated, and had a permanent grin which rendered him utterly non-threatening. He also used to stay at the head of my bed (not that his rough, fuzzy exterior was comfortable to sleep on) at night. One evening, as I was falling asleep, I glanced over at the bear, and I swear to you, he was breathing. Naturally, this sort of phenomena has been known to occur sometimes to people in a hypnagogic state, but I know that as soon as I realized it was breathing, I was on full alert. Of course, I was also paralyzed with fear, not knowing if saying anything or moving would provoke this seemingly mild-mannered pal to attack. It was probably a matter of minutes, but it felt like hours that I just lay there staring at the bear. Eventually, I drifted off to sleep, and we never had another incident, he and I, but to this day I recall the sheer dread I felt that evening, and I had a somewhat newfound respect for the power my ursine pal could wield among my toys.

David Schmoeller's Tourist Trap opens with Woody (Keith McDermott) walking along a lonesome road with a flat car tire. He comes upon a lonely gas station (always a good sign) and searches the place for assistance. Wandering into the back area, he comes upon a bunch of mannequins, dolls, and so on, and unseen forces handily dispatch the young lad. Down the road a piece, Woody's pals, Molly (Jocelyn Jones), Becky (Tanya Roberts), Eileen (Robin Sherwood), and Jerry (Jon Van Ness), are searching for him when they come upon a rundown western museum (another good sign) owned by the crotchety old coot, Mr. Slausen (Chuck Connors), and Jerry's vehicle also mysteriously breaks down. Slausen takes the kids back to his place, but warns them not to go outside or to wander over to Davey's house down the back. What do you think they do?

The first thing you notice as this film starts is the Pino Donaggio score which feels more quaint than menacing. But as we all know, Mr. Donaggio is a professional, and by the end of the film his musical composition feels not only appropriate but sinister. No small feat. In line with this initial sense of whimsy comes a dichotomy between new and old value systems. As Jerry's car rolls up, we notice Molly in the back seat (okay, we actually notice Becky in her tight tube top, but work with me here). Molly is dressed in a pretty, white sun dress and a white sun hat. Compared to her friends, who are all considerably more dressed down (and with less actual cloth) than she, Molly is something out of a daguerreotype. She is the odd duck among her friends, and even though she does participate with them in things like skinny-dipping, she is visibly ill at ease with the act and separates herself physically from her friends while doing it. Slausen takes a shine to Molly instantly, and she is the only one of the troupe who he will call by name. This is emphasized constantly through the film, and Molly also seems to be the only one with whom Slausen even wants to speak at all. Of course, Slausen is also an old-fashioned fella, living with all he has left ("this junk and my memories") in the world and pointing out repeatedly that it was the building of "that new highway" which essentially ruined his business.

The other characters are all fun-loving young folks who are just out to party, with all that entails. According to the rules of Slasher films (which hadn't been as stringently codified as they would be in just a few short years), this makes them the primary targets of the film's antagonist. It's a classic set up, and it is followed by the numbers. The characters are split up by the most specious of reasoning, taken to a remote location, and then murdered by a character-definingly-outfitted villain. The twist here is that the villain doesn't need to use his hands to murder his victims. Davey uses the multitudinous mannequins which litter his place. See, he has the power of telekinesis and uses it to make the dummies appear alive. It's an interesting idea to have the bad guy use the power of the mind to kill, but the structure and execution are so banausic, it detracts from the overall quality of the film, I think. Not enough to make it unworthy, but enough to keep it from greatness.

Have you ever been in a dark department store with nothing but rictus-wearing mannequins? Me neither, but they are certainly disquieting in their own right. For as much as they display any emotion (typically joy), it is unmoving, unchanging, and after a long spell of staring at you with dead eyes, unsettling. Over an extended period of time, the countenance which is supposed to instill a warm, inviting feeling instead inspires dread through its fixedness, in the same way that watching a beauty pageant becomes uncomfortable, because you know that the smiles on the contestants' faces are there strictly for show. The immobility masks what is inside, and that's where the horror comes from (not that beauty pageant contestants are scary…well, maybe they are a little). And when the mannequins turn as one to stare at their prey and their jaws drop open, it is chilling. Davey, then, wears a mask (or masks) which attempts to link him with the dummies. His mask is essentially that of a mannequin; smooth, white, and (perhaps most importantly) eyeless. This is not to say that Davey doesn't have eyes, but when his mask is on, we can't see them. This serves double duty. On the one hand, it keeps us from reading emotion on his face (the eyes being the most expressive feature on the human head), and it also deprives us of the much-vaunted "windows of the soul" eyes are conjectured to be (and they are; you can know a man's measure by looking him dead in the eye, I believe). Davey is not only a mannequin in look, but like his playpals, is in effect soul-less, a puppet pulling his own strings. His desire to be an imitation of life is scary, and the filmmakers would have been wise to play up these psychological aspects of the film. Tourist Trap is a good, creepy little movie, and one which is overlooked by a great many Horror fans. It is not one of the best, but (like its namesakes the world over), offers a pleasant and mildly thought-provoking piece of entertainment, if you're of a mind to give it a look.

MVT: The core concept is familiar enough and derivative enough to be comforting, but it is also just enough unlike other Slasher-type films (specifically with the telekinesis facet and how it's depicted) to make it stand out a bit from the pack.

Make Or Break: I know the Make is often the first scene with me, but that's only because it's a rarity that any other scene in a film encompasses the various aspects of a film and/or sets the tone for good or ill, like the first one or two can. This film is no exception, and the murder of Woody is a sterling example of what giving a viewer just enough of what they have to look forward to can do to keep butts in seats.