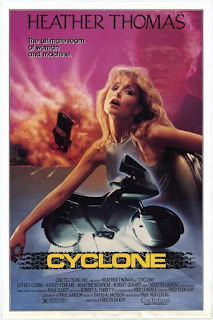 The Cyclone the title is referring to is a motorcycle created by Rick Davenport (Jeffrey Combs) that doubles as a military weapon. It’s equipped with lasers, guns and six rockets. It can reach unimaginable speeds and perform practically any stunt. Even the helmet is decked out. It comes with a radar system that speaks and it also shoots lasers. It’s like a ten year old’s wet dream come true!

Making that wet dream even better is Teri Marshall (Heather Thomas), Jeffrey’s girlfriend. She doesn’t know of his government job. She soon discovers when two punks, Rolf (Dar Robinson) and Hanna (Dawn Wildsmith), stab him in the back of the neck with an ice pick while they were out at the club. They’re hired goons of Bosarian (Martin Landau, having fun chewing up the scenery), who wants the transformer to the Cyclone to sell. Why he wouldn’t want the whole bike is beyond me.

While this sounds like a ton of fun, and certainly is at times, it’s not quite the enjoyable experience I was hoping for. The Cyclone doesn’t get used to it’s full potential until the finale. It races around town for a bit (in quite a few montages that drag a bit) and gets in a wicked car chase at one point. But, the lasers and rockets and whatnot don’t get busted out until near the end. I understand why Fred Olen Ray did this. He was building up the suspense and hitting the money shot at the end. While I respect this decision, I feel he stumbled a bit on the way there.

The main issue with “Cyclone” is that it can be boring. A lot of the dialogue can be atrocious and I found some talk heavy scenes to drag. For a film that’s only eighty-three minutes long, it sure has a lot of padding. I’ll give credit to the actors; they do their best with the material. Heather Thomas can be a bit flaky at times, but she handles herself well and is the camera’s best friend. Jeffrey Combs is quite charming in his brief role as her boyfriend and the two surprisingly have chemistry together. Dar Robinson is a hoot as Rolf, while Landau is fun to watch as his boss.

Olen Ray adds some comic relief in the form of two bumbling cops played by Tim Conway, Jr. and Michael Reagan. While they do score some laughs (them falling asleep while on a stakeout made me chuckle), they felt woefully out of place. They add nothing to the story and only waste time. I’m not so sure if Fred was filling dead air or if he just wanted the two of them in his film. It’s quite possible the latter is the case and he penned them in at the last minute.

I need to quit bitching and moaning! While I had my fair share of issues with “Cyclone”, I also had my fair share of fun with it. Though the action sequences only appear sporadically, they deliver on the goods. Olen Ray doesn’t hold back in the finale and goes balls to the wall (replete with a gargantuan amount of explosions). I just wish the road there wasn’t so bumpy.

MVT: Heather Thomas. She may have been flaky in spots, but she was good overall and held her own. She played the eye candy up to the camera, but handled herself well when it came to the action. She was a good choice for the role.

Make or Break: The finale. It saved the film for me. Honorable mention goes to the car chase in the middle, where the goons’ car gets ripped in half.