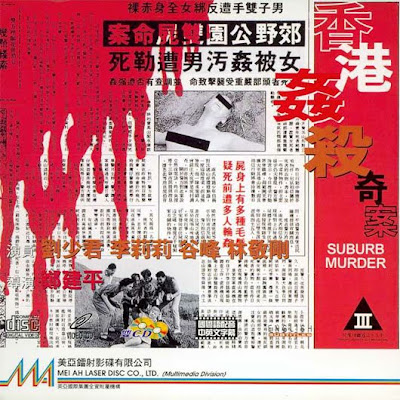 Suburb Murder is an ugly slice of Category III Hong Kong cinema, mostly forgotten amidst the Ebola Syndromes and Sex and Zens of the world. It doesn't deserve to be rescued from obscurity but it is an interesting feature for maybe those who enjoy lurid films from the uglier side of Italy for example. To put Suburb Murder into context, it is a slice of true crime cinema, following the formula set by Dr. Lamb where there is a crime story based on real events and you have the police investigation and subsequent confession and flashbacks to evil deeds.

Suburb Murder is a little different in the fashion that it is much rougher than its siblings, more crude around the edges and more interested in baring flesh that exposing the black heart of a mad killer. Basically the story follows a young thug called Kang who is caught after a murder/rape and is interviewed by police, going over his rotten childhood and involvement in a group of young hoodlums. Kang and his buddies are generally just scum, participating in several rapes and assaults throughout the picture. Spending the whole film in the company of such scum is what and just about all Suburb Murder offers. an attempt is made to humanize Kang, showing his broken home and he is given a ray of light through a close friend and a blossoming relationship but this comes after he is shown to be an ugly rapist so why should an audience give a fuck about him? when his girlfriend and friend fall prey to a pair of drunk white guys you're left not giving a fuck.

But, this is a moment of extra carnage and that's what Suburb Murder and films of its type are all about, bared flesh and exploitation. So I welcomed the crude melodramatics with open arms as it led to people getting beaten with rocks, nipples being chewed off and violation by way of a tree branch. Add in some very ugly men in their pants fondling some pretty rough looking women and you have a neat little package from the cellar of Category III cinema. The film contains little in the way of familiar faces but Cat III actress Lily Lee has a cameo so that adds half a point. Mostly favorable to trash hounds however even they might be put off by the film's odd structure which doesn't really convince or the terrible gun fight which gets shown twice.

MVT The general sleaze of the film.

Make Or Break The discovery of the corpse in the opening moments, it'll either draw you in or send you running.