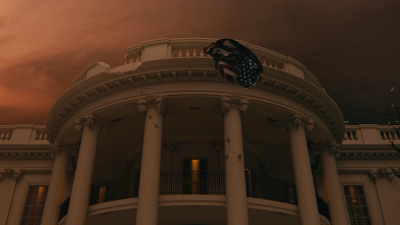 Our government doesn't shut down for anything, except for budget talks that is!

A key scene in Olympus Has Fallen is when the protagonist, Mike Banning, has captured a pair of terrorists for questioning. As soon as one of them laughs he stabs said funny man through the throat in under thirty seconds. For all intents and purposes that scene could be viewed as a throwaway moment within the film. However, it is my belief that this scene is the glue that holds the film together and represents why the film ends up working despite its flaws.

There are plenty of flaws to be found in Olympus Has Fallen. The story is as bare a story as one could hope to write. The characters are one dimensional and exist only to serve the plot. The lighting is far too dark for its own good during some key moments. It could be argued that the film deals with violence and consequence in an irresponsible manner. The complaint could be levied against Olympus Has Fallen that it is a big dumb action flick and nothing more.

All of the above are valid criticisms of Olympus Has Fallen, yet in the end I believe Antoine Fuqua's 2013 effort pushes past its limitations and comes out the other end a well made action film. It all comes back to the terrorist interrogation scene, a scene that is so quick it seems like it's not a big deal. It is the quickness of that scene that matters, the swiftness with which our protagonist deals with a problem. That surmises how Mr. Fugua deals with momentum in his film. It's not an abstract idea, in Olympus Has Fallen momentum is integral to the way the film moves and comes at the viewer. Things happen fast, so fast that they don't allow for the viewer to stop and truly think about the limitations that are trying to hold the film back. Scene after scene flashes across the screen, and always the momentum is being picked up, even the exposition is worked into small chunks so that it can't hold back the inertia achieved by the film. The terrorist doesn't have time to keep laughing, the film won't let him, and he is to be disposed of post haste, because that's the world of the film.

I did get a kick out of Olympus Has Fallen. I'm not about to declare it the very best that cinema has to offer. However, as far as big budget actioners go there's nothing wrong with enjoying Olympus Has Fallen. Mr. Fuqua's film hits the viewer hard, and relies on forward momentum and sustained intensity to keep the viewer interested for the entire ride. Sometimes good momentum is all that's needed for a quality filmic experience. Olympus Has Fallen has momentum in spades, and it makes good on getting the most out of said momentum. It may be big and loud, and silly at times, but Olympus Has Fallen delivers an intense action experience that is far removed from being a stereotypically dumb action film.