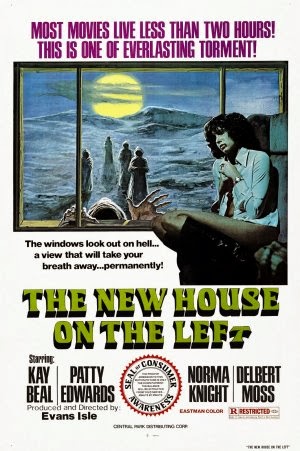 In movies, people dressed as Santa Claus always seem to be a focus of attention (even if only temporarily).  In The French Connection, for example, Roy Scheider chases a crook while clad in the jolly red outfit.  In fact, entire movies have been centered on people dressing up as the character.  Witness: Bad Santa, Silent Night, Deadly Night, How The Grinch Stole Christmas, um…Silent Night, Deadly Night 2, etcetera.  I honestly cannot think of a film where a faux Santa has been featured while still being just a part of the background (that is, he is noticeable without doing anything [or having anything done to him] which is humorous, villainous, or dangerous).  If there is one, I don’t recall it.  Then again, maybe that’s the point.  Claus, after all, represents Christmas, and placing a focus on him not only gives the audience a frame of reference for when a film is set, but it can also provide a visually interesting figure to catch the audience off guard, draw them into the story, or just warm them up.  And let me just tell you, you’re going to need a whole lot of warming up for Aldo Lado’s Night Train Murders (aka L’ultimo Treno Della Notte, aka Last Stop On The Night Train, aka New House On The Left).  Thank you, fake Saint Nick, for taking such a nice beat down at this film’s outset.

After we are introduced to thugs Blackie (Flavio Bucci) and Curly (Gianfranco De Grassi) via the aforementioned mugging, we also make the acquaintance of two young students (and cousins) Margaret (Irene Miracle) and Lisa (Laura D’Angelo).  The two young women are taking a train from Germany to Italy to visit Lisa’s family for the holidays.  While en route, the four meet, and skeeziness ensues.  And when a seemingly well-bred Lady (Macha Méril) enters the mix, things really go straight to Hell.

One of the things about this film which grounds it in verisimilitude is Lado’s use of vérité/travelogue style footage.  We have lots of handheld shots picking up the local color and establishing the locations of the film while also giving a bit of eye candy to those who dream of visiting foreign lands.  But the filmmakers include their fictive characters in this footage, so they are as much a part of this world as anyone else we see.  The only thing that makes them stand out is their behavior which (being actors acting) naturally draws attention to itself.  Any close ups, then, have a reflected, staged lighting which also distinguishes these scenes (again, like the Claus assault) from the naturalistic footage surrounding them.  So the viewer finds it that much easier to buy into the depravity coming down the pike.  Combine this with the Demi Roussos song A Flower Is All You Need, complete with a chorus of children singing about love, and you get the same sort of queasy pit in your stomach from the juxtaposition of musical style and exploitive material as you (or at least I) do from (the late, great) Riz Ortolani’s sonic lamentations as heard in Cannibal Holocaust.

If the third of this film’s above aliases sounds familiar, you’re likely asking yourself, “how much does this film actually borrow from Wes Craven’s Last House On The Left?”  First of all, to say “borrowed” is a bit of a misstatement, since this film lifts much of the earlier film outright.  Nevertheless, this is, first of all, a better-made film than Craven’s, and second of all, it’s a more thoughtful treatment of the subject matter.  Where Ingmar Bergman’s The Virgin Spring (a major inspiration for both House and Train) is very pensive and existential about its turn of events, and Craven’s film is straight up grotty exploitation, Lado’s movie attempts to blend both aspects, and to a large degree, it succeeds.  That the director is more concerned with the sociological facets of violence, however, doesn’t prevent him from getting down in the proverbial dirt.  And yet, all three films leave one with three different feelings, none of them especially upbeat even though all three follow the narrative of delivering unto the perpetrators of the movie’s evils a healthy dose of vigilante justice, by and large.  The fact remains that what Lisa’s parents are left with after they have exhausted their wrath is a very cold reality with which they must live out their remaining days.  This is not sanitized violence, though it is heightened.  It is brutal and vicious, and the audience is complicit in part, because they wanted to see it.

Lado places the blame for what happens in the film on the back of society or, more specifically, on the back of what most would consider to be “respectable” society.  So, we have a dinner party thrown by Lisa’s father Giulio (Enrico Maria Salerno), where he is first blamed for the violence in the world by a psychologist and then asked what he would do about it.  Of course, Giulio has no real answer for this, his retort being that there needs to be more “parental control and sports.”  He doesn’t need to think about violence, because it doesn’t touch his life.  This despite his occupation as a doctor and no stranger to blood and viscera, as we’re shown in a graphic (real) surgery scene.  Giulio can be glib about the subject but only for now.  But this illustration of society’s responsibility is best embodied by Méril’s Lady character (she has no proper name, because she personifies modern civilization).  She is impeccably dressed, with an elegant veil (like you might see on a widow at her husband’s funeral).  She engages with a man aboard the train about philosophy and society.  Yet, after she joins up with Blackie and Curly, she proves to be the worst of the lot.  She’s also unafraid to get her hands dirty, though her primary role is as a manipulator.  This complicity of society’s Haves extends to a peeping tom (Franco Fabrizi) whom the Lady involves in Lisa’s and Margaret’s violation, because she recognizes that he wants the same thing she does, but he is afraid to ask for it.  All this said, and despite the loftier ideas flying around the movie, it does deliver on its vow of exploitation.  It’s not easy to sit through, I’ll be honest, but it is not sleaze simply for the sake of sleaze.  Even if you don’t buy the notions put forth by the filmmakers through the characters, this film will leave you thinking.  Not particularly pleasant thoughts, but still…

MVT:  Lado’s direction is tight, and he does an excellent job blocking the film’s action out in some tight quarters.  He also does a marvelous job creating a sense of claustrophobia throughout much of the film, and this only adds to the nauseous feeling of the total experience.

Make Or Break:  As Lisa and Margaret wait to depart for Italy inside a darkened train compartment, they hear Curly’s trademark harmonica playing offscreen (courtesy of one Ennio Morricone, who made equally exquisite use of the instrument in the superlative Once Upon A Time In The West).  The dread evoked with just a few notes of music is tangible and a clear declaration that none of this is going to end well.