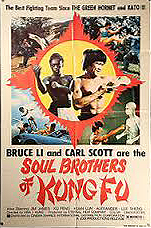 Following a recent viewing of the PBS documentary The Black Kung Fu Experience, I resolved to include more of the early cinematic contributions of African-American martial artists in my film viewing for 2014. (After all, why set goals for self-improvement in personal finance and health when I can set completely arbitrary media consumption benchmarks?) While Jim Kelly is probably the most famous and Ron Van Clief the most prolific of these pioneering actors, Carl Scott repeatedly emerged as the guy most overlooked and underappreciated. When I saw that RZA had name-dropped him in an interview with Film Comment as number one and the best, it all but cemented my urge to see his films -- all three of them! (I can’t, in good conscience, count Bruce Lee: The Man, the Myth, where he appears as an extra). 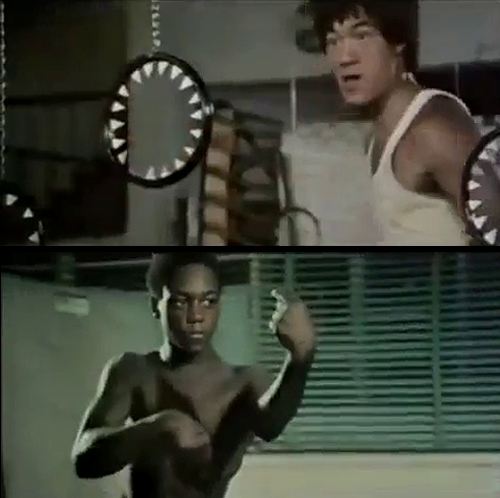 Like any group of young urban professionals, the trio of Wong Wei Lung (Li), Shao-san (Meng), and Chai Yun (Au-Yeung Pooi San) work a variety of crummy jobs to pay for their Hong Kong apartment. However, as hard-working immigrants from the mainland, they’re willing to do just about anything in order to live out their dream to live beyond their means. Wong Wei Lung and Shao-sen are doing menial labor down at the docks one day when they come upon a fellow dock worker, Tom (Scott) getting beat up by several of his bosses and colleagues for spilling paint while also being a young, black male. In rushing to his defense, the roommates catch the ire of a cruel boss named Mr. Chien (Feng), a man involved in absolutely every business in Hong Kong, legit or not. 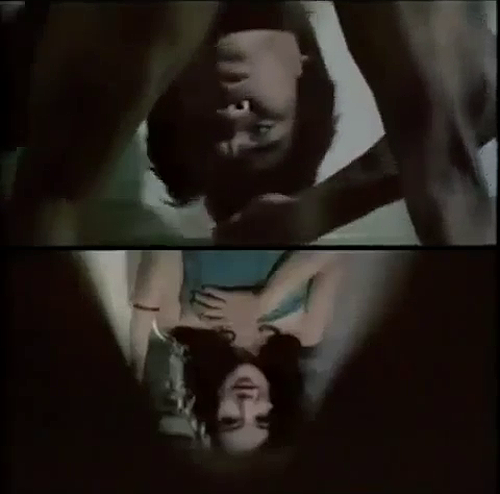 All three of the men lose their jobs, but eventually get new, shittier ones. They lose those too. While Shao-san ceases all productivity and falls into a gambling addiction, Wei Lung participates in organized fights to make ends meet. During a conversation with Chai Yun about the next day’s huge championship match, he announces his intention to marry her if he wins, and wait a minute, it’s her birthday tomorrow, so they’ll just get engaged during her party because apparently they’ve been banging on the side this whole time. We see glimpses that Shao-san harbors a secret jealousy about their relationship, but all that sexual tension never really goes anywhere and he gets sidetracked by his involvement with a mysterious bar-girl (Shaw). I held out hope that this arrangement would explore the complex spectrum of human sexuality in the same vein as the 1994 romantic comedy, Threesome, but the filmmakers played things safe.

Throughout it all, Wei Lung and Shao-san train Tom in kung fu so he can better defend himself against angry shipping supervisors and asshole Triads. Meanwhile, Mr. Chien assembles his own trio of bad, nameless motherfuckers, respectively portrayed by Alexander Grand (Sideburns), Lee Hoi-Sang (Jug-Smasher), and Peter Chan Lung (Tiger Style). Allegiances shift, people change, and everyone is freaking out about money. A showdown is inevitable.

Despite my skittish disposition towards most Bruceploitation fare, this was a pleasant surprise. The film doesn’t do much to hide its iconographic nods. Even though his hair is more Bieber than bowl cut, Bruce Li’s character makes frequent references to his idol, has a Lee poster hanging in his room, reads his books, and is even regarded by Mr. Chien as a dangerous fighter because he “fights like Bruce Lee.” Sure he does, movie dialogue. Wink wink, nudge nudge.

I don’t know that 1977’s Soul Brothers of Kung Fu was the best place to begin in Carl Scott’s filmography, but it was definitely the earliest. He earns a strong supporting role here, with plenty of screen time and a performance nearly undone by one of the most horrific voice actor dubs I’ve ever heard. Fortunately, we’re not watching a Carl Scott movie to see him channel Sidney Poitier, and he conveys plenty of screen presence in his engagements with an eager and energetic Hong Kong stunt team in some good fight scenes. At times, he looks like an absolute world-beater. The Gents have discussed in past episodes how rare it was for gweilos to be able to hang with action players in golden-age Hong Kong, but Scott looks very much at home here and his fighting talent is undeniable.

Wading through the glut of 1970s kung fu cinema, let alone the output of second- and third-tier Hong Kong production companies, can be a cinematic minefield. Does this film rival stuff with the Shaw Brothers stamp? Is it Magnificent Butcher? Of course not, but when you’ve seen something as actively bad as Swordsman with an Umbrella and been burned by bargain bin multi-packs, a film like this is a happy accident. The exploitation elements were surprisingly strong too, as debuting director Yi-Jung Hua navigates from x-ray punches, organ gouging, and attempted rape to casual bloodletting and groin attacks. It should be said that not all of these elements revealed themselves on my first watch; after observing some confusing edits during the back-end “boss battles,” I discovered that the film had an uncut version floating around under the title Kung Fu Avengers (detailed here, be wary of spoilers). A simple rewatch of a few select climax scenes probably elevated this film a full point or more. 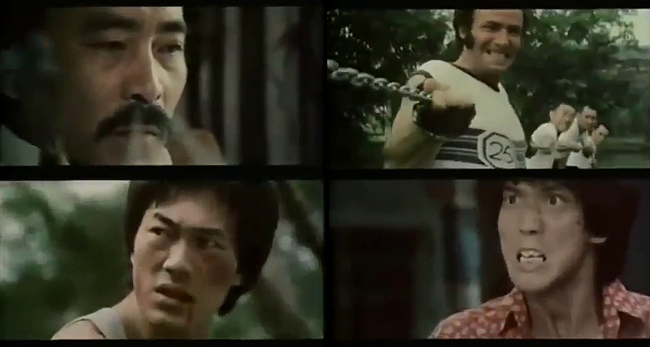 Make or Break: No matter which cut of the film you watch, the aforementioned sequence of boss battles is the stretch upon which your enjoyment of the film will likely hinge. If you see the Xenon
version, the herky jerky editing and jump cuts to nowhere will probably break the film into a hundred bite-sized pieces. The grisly conclusions in the uncut version, however, make for a satisfying film overall and provide logical extensions to the techniques we observe during training scenes earlier in the film.

Does the Film Have a Random Yuen Biao Appearance?: Yes, it has one.

MVT: I wish I could report that this was *the* Carl Scott film to see, but he’s underutilized here and the awful dubbing doesn’t help matters. Everything about this film is, at minimum, solid. Which is to say, not horrible. This makes it hard to single out any aspect as the most critical, but the fighting is probably the element closest to exceptional. All of the fighters, from Deadly Venom Meng Lo and Alexander Grand to Carl Scott and Feng Ku move well and throw convincing strikes, and the gore at the back end of the film helps to sell the stakes of each fight. The inventive training sequences added a nice visual touch as well. Dig it.
Score: 6.75 / 10
Posted by Karl Brezdin at 7:00 PM