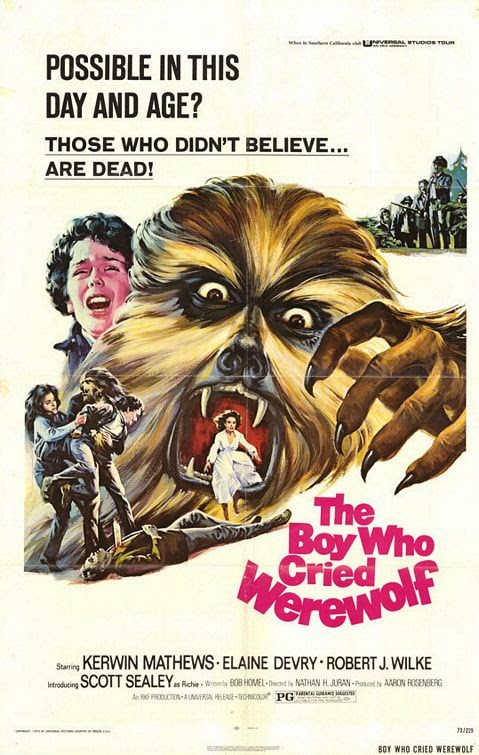 Hey, kids!  Do you remember the Werewolf television series?  Well, you should.  It aired on the Fox Network from 1987 to 1988, and I have to say that it was one of my favorite shows when I was young.  The basic premise is that a young man, Eric (John J. York), is bitten by his lycanthropic friend, and after killing his buddy goes on the run from the law.  He quickly discovers that the only way to release himself from his curse is to kill the first werewolf who infected all the other people leading up to him.  The villainous monster of the piece was played by Chuck Connors, and he’s a salty ship captain with an eyepatch named Janos Skorzeny.  Also on Cord’s trail is a bounty hunter named Alamo Joe (Lance LeGault), who is a picture of badassery.  The creature design was done by Rick Baker (just in case you thought a program from the Eighties would look horrible in that department).  What was also interesting about the show is that each episode was only thirty minutes (I assume to keep production costs down), and the overall tone was very dark for the time.  Connors became something of a holy terror behind the scenes and had to be written out at the end of the first season (you can read all about it here:  http://allangcole.blogspot.com/2010/10/chuck-kisses-ring.html), but the series didn’t survive to a second season, regardless.  The show was supposed to be released on DVD some time ago, but due to music rights (scuttlebutt is Mike and the Mechanics were the reason, but I’m not totally certain of that) and the lack of separate sound tracks to remove the offending tunes, it never came to fruition.  The ironic part is that you can watch the entire series now on Youtube (and you should) with all the music intact, so it just goes to show that sometimes you shouldn’t hold out too much on some things because it will come back around to bite you in the ass (or something).  Would Nathan Juran’s The Boy Who Cried Werewolf have been better had Robert Bridgeston (Kerwin Matthews) been bitten on his derriere?  The world may never know.

Divorcee Robert and his son Richie (Scott Sealey) head on up to their mountain cabin, and while waltzing through the woods, Richie is attacked by a werewolf.  Robert gets bitten (on the arm, in case you wondered) but manages to kill the monster.  And now Richie’s life is in danger whenever the full moon rises.

This film plays fairly fast and loose with Hollywood’s lycanthropic lore (which was mostly invented by Curt Siodmak, writer of Universal’s 1941 The Wolf Man), hewing closer to age-old folklore.  Consequently, we get things like the idea that a werewolf can only be killed by wolfsbane, being beaten with silver (the only thing that really harks back to the classic film tradition), or a stake through the heart (huh?).  There’s also the theory that a lycanthrope’s index finger becomes longer than their middle finger while in human form (using physical traits to spot a werewolf is something which was also done during the various witch hunts in our world’s history).  But the one that’s actually intriguing is in werewolfism’s ties to the occult.  One of the early myths is that a person can become a werewolf through allegiance to Satan and/or sorcery.  Robert’s physical wounding, then, constitutes a wounding of his soul.  Yet he didn’t ask for this; he displays no evil traits as we’re introduced to him.  He has no seemingly nefarious machinations in his head aside from getting his career-loving ex-wife Sandy (Elaine Devry) to come back to him and become a more traditional housewife.

The concept of spirituality is strong in the film and is embodied in a quasi-serious/semi-humorous way by Brother Christopher (the film’s screenwriter Bob Homel) and his followers.  They set up a hippie/Jesus commune where he espouses such platitudinous vagaries like “God is not dead.  Man is not sick.”  Robert cannot approach the “pentagram” the youngsters form (more like a hippie version of “Ring Around the Rosie,” just to make things more offbeat).  He physically cannot approach this “holy” activity or the cross that stands in the middle of the hippies’ campground.  Later, Brother Christopher tries to exorcise the devil from Robert, and the filmmakers play it ambiguously as to whether the preacher actually has the power of God at his fingertips or it is just the timing of the oncoming sunrise.  It’s an interesting way to intermingle a traditional werewolf story with the occult/Satanic movies that were becoming popular at that time (and would come to its apex in some people’s opinion with the release of The Exorcist one month later).

In line with the grim tone set up by its facets of mystical fatalism, the movie portrays the relationship between Richie and Robert in a dour fashion.  Robert loves Richie, and at the start even tells him that he’s “the sole blessing in [his] life.”  Robert is willing to do things mandated by psychiatrist Dr. Marderosian (George Gaynes) in order to help Richie deal with the fact that he witnessed his father kill a man/werewolf.  But that said, Richie becomes Robert’s murderous focus when he transforms.  He seems to have a mad-on for his child, a sub-conscious desire to kill him and get him out of the way so that he can reconcile with Sandy (never mind that Richie didn’t, by all appearances, have anything to do with their breakup, but Richie gets to live with Sandy back in the civilized world and Robert does not).  Richie says that he remembers the way things used to be, but more importantly, he notes that he used to listen to his parents fight.  In this way, Richie and Robert’s relationship is verisimilitudinous to some degree.  There are unspoken resentments but also a genuine love.  The animosity that arises when Robert changes is a physical manifestation of these domestic tensions.  This makes Richie the hero of the piece, if you choose to look at it that way (it is, after all, titled The Boy Who Cried Werewolf, not The Man Who Cried Werewolf, and while we’re on the subject, the film has zip to do with the fable of “The Boy Who Cried Wolf” except for the fact that Richie tells everyone within earshot that a werewolf is prowling the hills).

It’s with this in mind that I have to address the film’s biggest weakness.  Sealey’s performance is of the precocious, über-whiny variety.  He delivers every line of dialogue like he’s just been grounded for a month and always at the top of his chalkboard-scraping voice.  Children in genre movies generally come in one of two varieties.  They are either mini-adults (if not in mannerisms than certainly in resourcefulness) or such unrealistic innocents that they simply become targets for the audience’s derision.  According to IMdB, Sealey only ever acted again in an episode of Emergency!, and I can’t help but think that his chops never got refined much past that.  If you can get over his performance, though, I think The Boy Who Cried Werewolf has something to offer to the more forgiving Horror fans of the world.  Not much, but something.

MVT:  I love the monster makeup in this film, courtesy of one Tom Burman who also worked on Halloween III, Happy Birthday to Me, and other genre favorites.  It got some derision (if I remember correctly in Famous Monsters of Filmland) for resembling more a cuddly domestic canine than a ferocious wolf, and there’s some truth to that.  But I still love it (maybe because of that).

Make or Break:  The first attack on Robert and Richie sets the tone for the film.  It also gives us all of the good and the bad of the movie in one fell swoop, so you’ll know pretty swiftly whether you’re in or not.