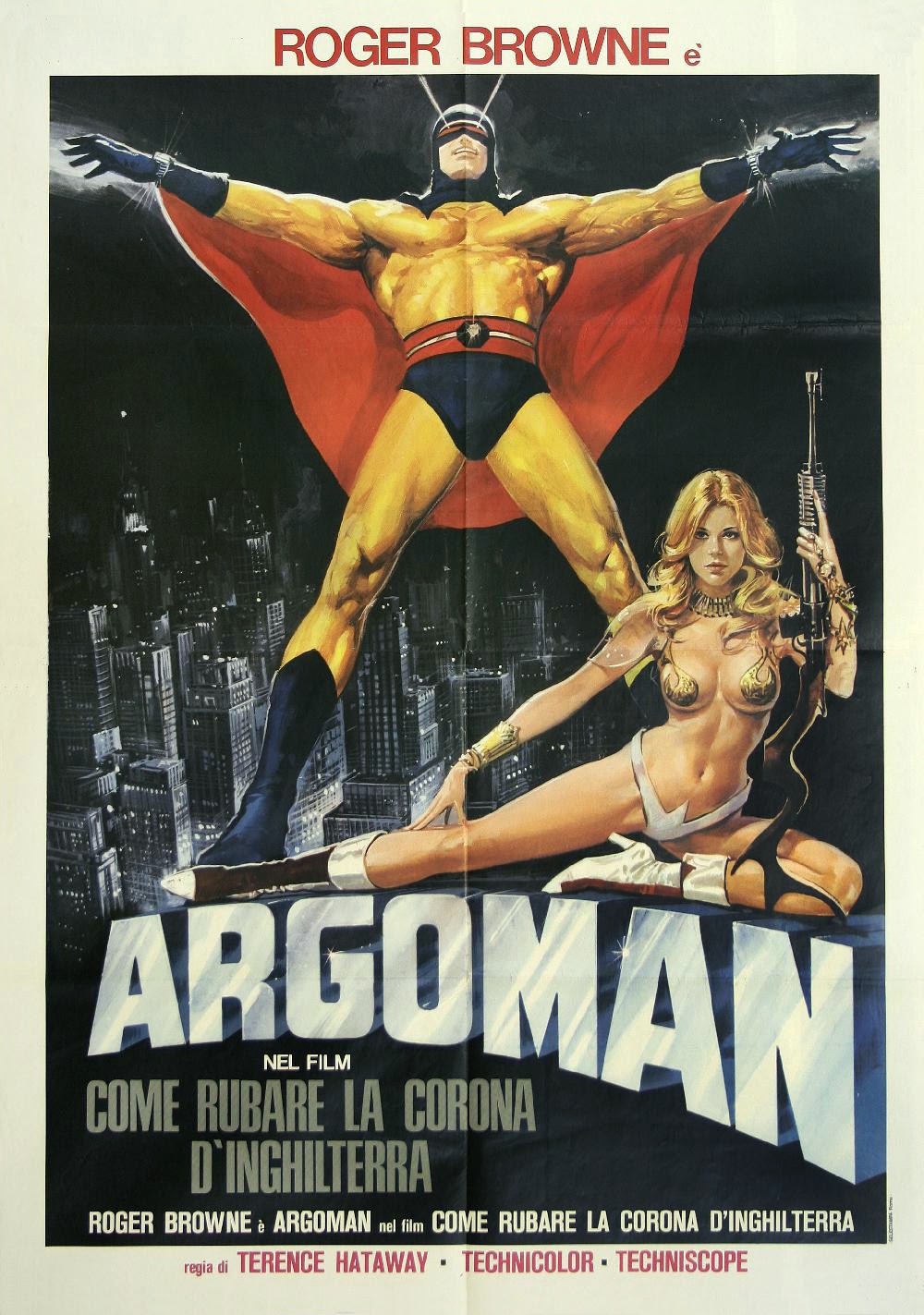 Incredible Paris Incident begins with the daring burgling of the Crown of England, which a guy steals by dressing up as one of those Beefeater chaps and hiding the crown under his big tall furry hat. The police are baffled, as they often are. For all their big reputation, every time Scotland Yard appears in a movie, it's usually in a newspaper headline followed by the phrase "Is Stumped!" They look cool and all, with their tweed jackets and London Fog overcoats and pipes, but when is the last time they successfully solved a crime in a movie? "Scotland Yard Baffled!" "Scotland Yard Left Without a Clue!" "Scotland Yard Mystified!" Hell, even the Scotland Yard guy in this film goes, "What? They expect us to solve these crimes?" What's the deal with Scotland Yard?

Meanwhile, on his own private island somewhere in the Mediterranean, we meet our hero, code name: Argoman. Don't confuse him with Super-Argo. Argoman is your typical ultra-smooth European spy guy. He has his own island and one of those cool space-age bachelor pads. Everything is hooked up to remote controls and computers. While relaxing poolside in his villa and chatting with his very European looking Indian servant (we know he's Indian because he's tan and has a turban on), Argoman senses something unusual. That's right, Argoman has various psychic abilities, one of which allows him to detect when sexy women are piloting their own private hovercrafts near his island. Being a sly devil and all, he uses his psychic powers to the hovercraft to his island, and then levitates the sexy woman across the beach and right into his lap. He follows this act of kidnapping with the line, "Please forgive me, but when I sensed you passing by I couldn't help but dabble in a little telekinetics."

The woman (Jenabelle) who we recognize as the woman behind the thievery of the Royal Crown (the hat, not the soda -- no one would steal RC Cola), is annoyed at first that this total stranger has mentally hijacked her boss hovercraft and levitated her across the island into his lap. However, when she is witness to a display of his rapier-sharp wit and charm, she can't stay mad at him. Argoman's servant is nervous, and reveals to us that after having sex, Argoman loses his powers for six hours. Argoman just laughs and says he is safe because he's on his own secret island. Plus, he hasn't gotten laid in a while.

But this is a Eurospy film, so our two potential sex partners can't simply retire to the boudoir for a night of tender passion and animal lust. No, they must play a little game. Argoman gives the woman a bow and arrow. If she can hit the bull's-eye on a target, he'll give her an assorted gift pack of precious jewels and a brand new Rolls Royce. If, however, she misses, well then he hits the button on a remote control to slide open the wall, revealing his rotating suspended bed. Jenabelle in full Jackie-O beachwear, takes the bow and arrow and just narrowly misses the target. Darn! But, something crafty seems to be going through her head as she and Argoman head toward the bed. After they do something behind closed doors, presumably playing Boggle, she comes out, nonchalantly picks up the bow and arrow and nails the bull's-eye with no problem. She then thanks Argoman for the sweet lovin' in the rotating suspended space-age bed, takes the sapphires, and says she won't need the Rolls as she already has one. Never one to be outdone, Argoman has to huff, "Well, I have several." Then she hops back in her hover craft and darts off across the sea. 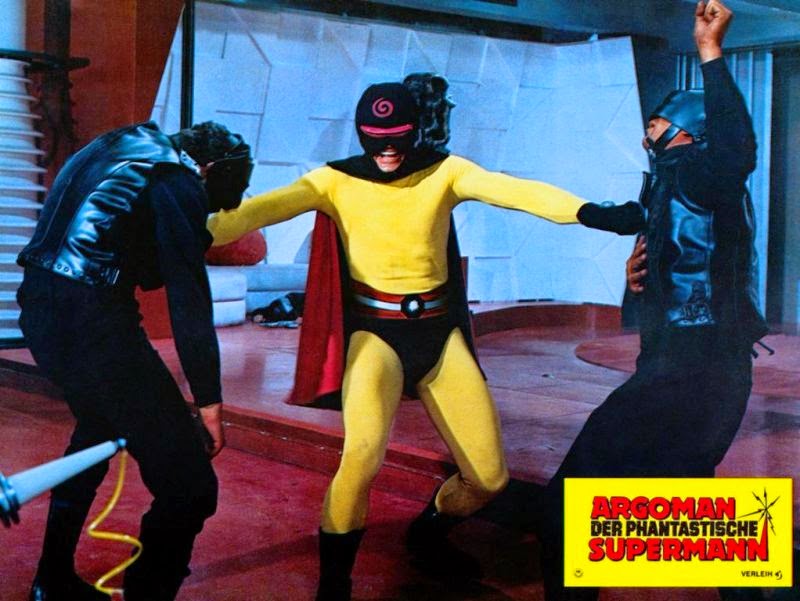 Meanwhile, back in England, Scotland Yard is still stumped by the theft of the crown. They have decided to blame Argoman, who we learn is sort of like Batman in that he does heroic things but everyone thinks he is a criminal. However, the inspector seems to have some secret knowledge about Argoman, and soon contacts him. Argoman is annoyed that the same guy who tells the press Argoman stole the crown is the one calling him for help in solving the case, and who can really blame him? It's like saying, "Well, I ordered your execution today, but I was hoping you could drop by beforehand and help me move a couch." Luckily, Argoman is a sport, plus he can levitate sexy women across and island and right into his lap, so he's probably in a good mood most of the time. He agrees to leave his plush sub-tropical private island in order to help the bumbling buffoons of Scotland Yard get their stupid little crown back. When reviewing security photos of the museum, Argoman recognizes Jenabelle in the crowd. He then begins to think something fishy is going on. Could Jenabelle possibly be the dreaded "Queen of the World" who has been taunting Scotland Yard via telegrams? Speaking of which, Scotland Yard must have a palace full of "letters from master criminals taunting Scotland Yard."

Meanwhile, Jenabelle returns the crown, just to further taunt Scotland Yard. She also demands that they turn over to her a giant diamond that was created by a nuclear blast. With the human head-sized diamond as the centerpiece of her giant computer, she will be able to harness untold powers! Meanwhile, Argoman is on his way to Paris to stop her diabolical scheme. Right off the bat, Argoman catches her men, who are dressed in matching leather outfits. He uses the old "distract the guard with a naked woman" shtick that we've probably all used a thousand times and then sneaks into their truck to find her secret layer, and soon finds himself getting his ass kicked by out-of-shape guys in form-fitting leather Buck Rogers outfits. So he does what any man would do -- he instantly transforms into a laughing super-hero in yellow and black underwear and a cape that is three sizes too small. He thing proceeds to stand with arms akimbo, laughing that manly laugh as he tosses lackeys about with his mind powers. 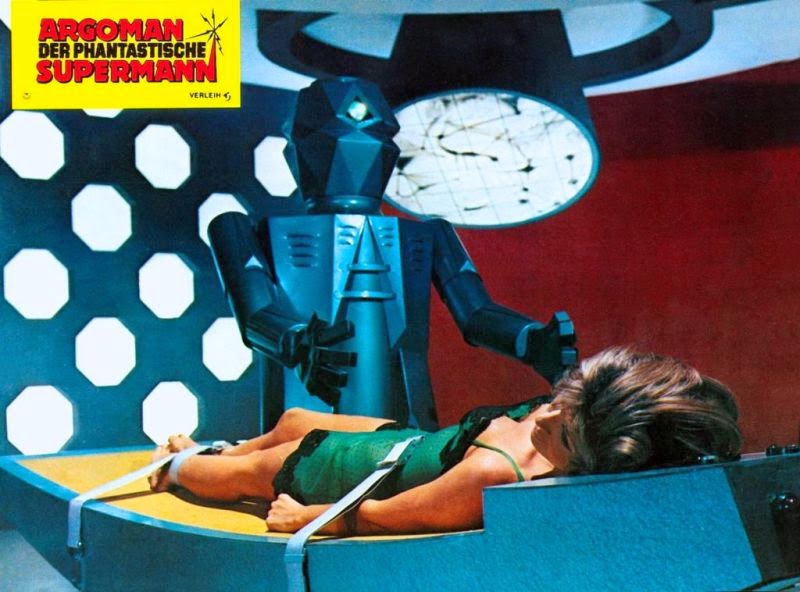 This is what makes this film so special. Oh sure, it could have been a straight-forward Eurospy film, but they decided to go on and throw the whole superhero thing in for good measure. It's the little things that make these things so special. For instance, Darth Vader had to wear the sexy leather outfit and helmet so he could breathe, but he just went ahead and threw the cape on for the hell of it because he knew it looked cool. Likewise, Argoman could have just been a slick undercover spy with psychic powers and a private island and a sexy secretary and glowing green eyes, but he goes ahead and puts the superhero costume on just for the hell of it.

Incredible Paris Incident is indeed one of the most incredible damn things I've ever seen, and I've seen a lot of incredible things. It has a good sense of humor, tons of action, and more weirdness than you can shake a walking stick at. Director Terence Hathaway, also known as Sergio Grieco, directed several Eurospy films, including Password: Kill Agent Gordon, Operation Istanbul, as well as the Eurocrime film Beast with a Gun, but this is far and away his weirdest, and probably one of the weirdest the genre has to offer. It's also cooler than I could ever hope to be. I wish I could be more like Argoman. In fact, this movie is so astoundingly good that it has inspired me to do more than just sit on my ass. I am going to take control of my life. I am not going to wish I was swanker. I am going to make it happen!

And I am going to begin by wearing bright yellow spandex and a little red cape everywhere I go.

Make or Break: The moment Argoman levitates a woman out of her private hovercraft and into his lap, you know you are in for something special.